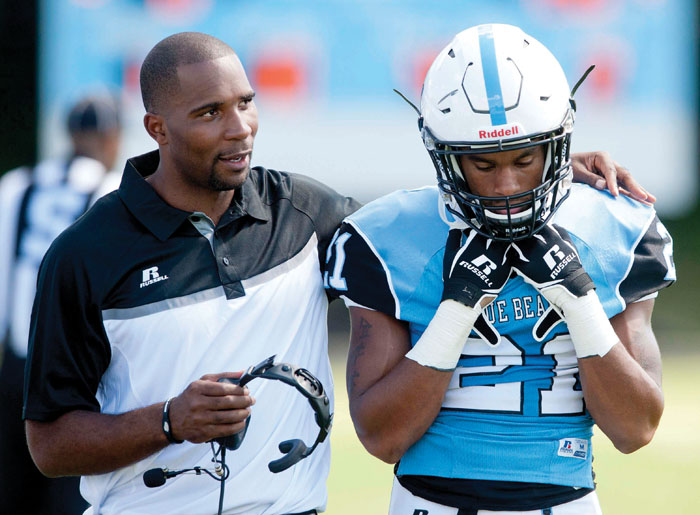 JON C. LAKEY FILE PHOTO/ SALISBURY POST ... Livingstone defensive coordinator Rodney Hughey, left, and cornerback Gregory Hines (21) have worked together for four-plus years. They are shown above during a game during Hines’ freshman season in 2015.

And the Blue Bears will do so with their home opener this Saturday at Alumni Memorial Stadium.

Lincoln University (Pa.), a CIAA-member from the Northern Division, comes calling for the 1 p.m. kickoff. Livingstone is coming off a 19-0 victory over first-year program Allen on Sept. 8, so the Blue Bears will be looking for its second straight win. Livingstone opened the season with a loss at Pikeville (Ky.) on Aug. 30.

Defensive coordinator Rodney Hughey is Livingstone’s acting head coach during the first four games. Head coach Daryl Williams will return to the sideline on Oct. 6, the Homecoming game against St. Augustine’s. Williams is at practice on a daily basis but not at the games due to an “athletic administration decision.” No further comment has been offered by the college.

“It’s our first home game, so the team is looking to come out and start fast and play strong,” said Williams, in his sixth year at the helm. “The guys are real excited and looking forward to a home game — and we’ve had some real spirited practices this week.

“But Lincoln is going to be coming in real hungry,” continued Williams. “They have a new coach (Josh Dean) and a bunch of new players, so we expect a tough battle.”

Hughey, in his ninth season as an assistant coach at Livingstone, received a Powerade bath after the Blue Bears’ win at Allen. He is downplaying the “acting coach” role.

“It doesn’t change what I’m still concerned with — coaching defense and coming up with a defensive game plan,” said Hughey. “As far as the extra game day duties, I’m just trying to keep everything as normal as possible. Everyone has the same goal — win the game and present Coach Williams with the game ball. It’s a testament to his leadership that things are running smoothly in his absence. On game day, we’re just trying to play smart and play well.”

A key performer for Livingstone has been senior defensive back Gregory Hines II. Already with an interception at Pikeville, Hines returned a punt 48 yards for a touchdown in the win over Allen. Hines’ TD turned a slim 3-0 lead into a 10-point advantage, just before halftime.

Hines actually muffed the punt, before picking up the football and taking it to the end zone.

“I had dropped it but just stayed composed and picked it up and made the play that came to me,” remembers Hines. “It was just a basic blocking scheme but everybody did a great job. I just had to make it happen and I appreciate the guys’ work on making the play for me. But as soon as I saw green grass, it was over.”

Hines admits that he’s not the fastest player on the roster for Livingstone, but as a fifth-year senior, he is fast enough, and more importantly, trustworthy when it comes to fielding punts.

“I believe that the coaches trust me with the ball in my hands and they believe that I can make plays,” added Hines. “I just try to secure the ball — that’s always the first thing.”

Williams agrees with that assessment.

“Greg has good hands and is an older guy who knows that catching the ball is important,” said Williams. “And he has the experience needed to know all of the blocking schemes on punts.”

One of three career Livingstone seniors, along with defensive tackle Armond Cox and running back Marcus Baisy Jr., Hines is also a veteran starter at cornerback. He led the team in interceptions last season.

“I like doing it all,” said Hines. “The whole game of football is fun to me.”

From Southwest DeKalb High School in Atlanta, Hines was a surprise find for Williams and Livingstone. He wasn’t even recruited to play football for the Blue Bears.

Hines’ friend from Atlanta, Avery Perry, was at Livingstone, having been recruited for basketball. Hines decided to enroll in school with the idea that he would eventually walk onto the football team.

“The coaches didn’t even know I was here,” Hines recalls with a laugh. “We were out there playing intramural football and Coach Hughey saw me, and introduced me to Coach Williams. He gave me a shot to go out for the team.”

“That’s true, he wasn’t recruited — Greg was a steal for us,” said Williams. “When he first came to the program, he had to sit out and get his academics straight, but he did just that and everything else that we’ve asked of him. He was voted a team captain. He’s really taken on more of a leadership role and he’s living up to what we thought he could be.”

Hines is a sports management major and hopes to one day own an indoor facility for recreational activities. But he could also return to Atlanta, where his parents, Gregory and Mary, own Hines Home of Funerals.

“I can always go back and do mortuary work,” said Hines II. “I’ve been around that type of work since I was 6 years old, so I’m used to it.”

All in all, Hines is happy that he followed his friend to Livingstone five years ago.

“Just being at Livingstone, you really learn how to overcome obstacles and overcome adversity,” said Hines. “I know how to get back up and keep going.”

Hines said that he has a special bond with fellow seniors Cox and Baisy, as well as Hughey, his defensive coordinator.

“Coach Hughey, I really appreciate him,” concluded Hines. “He’s taught me a lot, on and off the field. He’s taught me how to be a leader and be more vocal.”