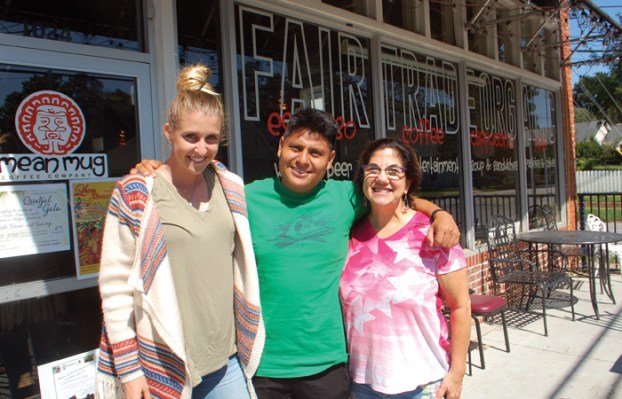 ‘He’s a miracle all the way around’: Victorino Lobos brings his Guatemalan story to Salisbury

SALISBURY — Meet Victorino Lobos. He’s a fit, youngish-looking 29-year-old. He’s bi-lingual. Back in his home country of Guatemala, Lobos takes care of his ailing mother, mentors young children and has a winning smile.

It’s hard to imagine a 7-year-old Lobos selling onions and shining shoes in Antigua to help support his family and basically just trying to survive. “Believe me,” he says, “sometimes we asked for money and food.”

Everything changed for Lobos when he was given a chance to attend the Escuela Integrada school, at the invitation of an American. Education in Guatemala is not free, so the young Lobos welcomed the opportunity to attend the school with financial support from people he didn’t know.

Lobos went on to graduate high school, and although he couldn’t afford college, he spent years learning English, attending a class for $50 a month.

Today, he contracts with Escuela Integrada, serving as the school’s liaison with visitors from the United States, whether they be adults, high school mission groups or college kids looking to help the Guatemalan children who most need it.

“I thought it was a good business for me,” Lobos says.

Lobos meets groups at the airport in Antigua, sees them at their hotels, walks with them between destinations, translates for them at dinners and assists everyone in getting settled in. For the school, it’s a blessing.

“It helps the school function so much better,” says Lauren King of Tulsa, Okla., who is an English teacher at Escuela Integrada.

Lobos flew on an airplane for the first time Tuesday on his way from Guatemala to the United States. More specifically, he has come to Salisbury so he can meet and speak to people attending Saturday night’s Quetzal Gala, which supports Escuela Integrada.

The cocktails, dinner and dancing event is being held from 6:30-11 p.m. at the Vista at Walnut Hill in western Rowan County. Anyone is still welcome to come. The price is $75 a person, and online reservations are available at wearegraces.org/gala.

King flew with Lobos on his trip, along with Hannah Nadeau, a liaison for GRACES, a Salisbury-based organization that raises money to support the 180-student Escuela Integrada school.

Paula Bohland serves as executive director of GRACES, and her church family at St. John’s Lutheran Church has been heavily involved in supporting Escuela Integrada. Every three years, a youth mission trip from St. John’s goes to Guatemala, but adult groups and college-aged contingents travel there, too.

At the school, students (pre-K through the ninth grade) are fed a full breakfast and lunch every day. Two school psychologists are on the staff, including Lobos’ brother Juan.

GRACES’s support for Escuela Integrada goes far beyond the education part in also trying to help students and their families with food, medicine and social opportunities such as family nights and Bible schools.

Two psychologists are needed, King explains, because 80 percent of the students have suffered from some kind of abuse — physically, socially or emotionally.

While he’s in Salisbury — he has to fly back to Guatemala next Tuesday — Lobos is staying with Stan and Sandy Jordan. He also will be taking advantage of a free dental visit with Drs. Jim and Luanne Anderson of the Anderson Dental Group.

Lobos says when he speaks to those attending the second annual Quetzal Gala, he will be telling the crowd of his experiences and why going to school at Escuela Integrada proved so important for him.

Without that education, which also led to one of the exclusive scholarships to attend high school, Lobos says he could easily have become a drunkard today, a man with many children, or both.

“So, thank you, God,” he says. “Now I am traveling to the United States and sharing my life with many of you and telling how education can change the lives of many people.”

Lobos has to return to Guatemala so soon, mainly out of concern for his mother, who is in poor health. He is a primary caretaker for his whole family.

“She supported me when I was kid,” Lobos says. “Now I have to support her.”

Both Bohland and Lobos remain surprised that he received a 10-year visa to come to the United States. Most people in Victorino’s financial situation are not approved for a visa.

Even the school’s chief administrator, a well-respected person, was denied a visa.

“He told me at the beginning of the year in January that he’s coming to the United States,” Bohland says of Lobos. “I really would not have told you this day would come. It really is a miracle — he’s a miracle all the way around.”

Beyond his rapport with visitors, Lobos is an important figure at the school itself. The families of the students trust him. “He has a great relationship with the families and kids,” King says.

The children attending Escuela Integrada come from an impoverished, mountainous region. King says some of the children walk an hour-and-a-half to reach school daily. The school is actually in the village of Jocotengo just beyond the city.

Lobos says he remembers as a young student the thrill it was to receive a once-a-year delivery of shoes from the United States and new clothing. He and Juan, who was older, often wore the same things every day.

Lobos doesn’t know exactly what all he will take in during his short time in Salisbury. He already is amazed at the flatness, the wide streets and highways and the dependence on cars. Back home, many more pedestrians crowd the streets because, along with Lobos, walking is their primary means of transportation.

Lobos has never driven a car, which he says can be an adventure in Guatemala anyway. In fact, his running shoes reflect the wear and tear of walking many miles a day.

No worries, Lobos says, he would walk thousands of miles to speak to people at Saturday’s Quetzal Gala about the school that made a difference in his life.

“Escuela Integrada was like my second family because they supported me so much,” he says.

Staff report SALISBURY — A fund-raising campaign that has been carried on quietly and successfully until now went more public... read more