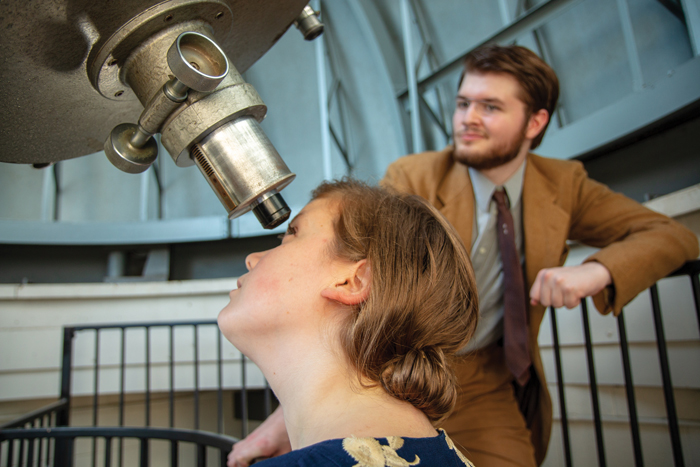 Sir Arthur Eddington, played by Zachary Karvon, observes Cecilia Payne, played by Brielle Jobe, as Cecilia observes the eclipse of May 29 1919. An event that was used to prove Albert Einstein’s theory of relativity. Photo by David Pulliam

Catawba College Theatre Arts is proud to offer the world premiere of Dr. Bradley Stephenson’s new play, “Sister of the Stars” at 7:30 p.m. on Tuesday, September 25 in Hedrick Little Theatre of the Robertson College-Community Center. Subsequent evening performances of the show continue September 26 through September 29.

Have you ever felt a calling so deep that the purpose behind it seemed to reach to the heavens? That is the calling that permeates “Sister of the Stars,” a play about Cecilia Payne and her struggles to become the first woman to get her Ph.D. in Astrophysics at Harvard. It takes playgoers through her experiences with the Harvard Computers, who were women of notable achievements to process data for the astronomers at the Harvard Observatory, and other colleagues as she writes her dissertation about astronomy and stellar composition. The play follows her journey, both academically and emotionally, through the twists and turns of discovery.

While this is the first time we get to see it on stage, this isn’t the first time we’ve heard “Sister of the Stars.” Last spring, there was a stage reading of Theatre Arts Professor Stephenson’s play. Catawba College junior Matthew Windsor of Mooresville has a lot to say about the difference between the two: “There’s the aspects of blocking and scene work, but with the reading there’s less of a connection to the characters, but now you’re able to make those connections to establish them and build off of that character. It’s really cool.”

Windsor will be playing Sergei Gaposchkin in “Sister of the Stars,” and also shared some insights about his fellow cast members and the show. “It’s been a fun time. It’s been awesome to get to know the cast and getting to watch them work. They bring different things to the table that I don’t even think about. It’s a fun show that gives a bit of insight about how feminism has helped influence astronomy.”

Show Director, Theatre Arts Professor Chris Zink spoke about the show’s stage debut: “It’s definitely interesting to be the first one to do something. You can’t research and look up what others have done for this. It’s really something else.”

Zink also spoke about how he feels about the nature of the play: “The scientific background is actually really interesting, because it adds to the students’ learning experiences. Learning more in depth about the scientists who discovered these things, and it’s really cool to see these students doing that.”

Tickets for “Sister of the Stars” are $15 for adults, $10 for senior adults/non-Catawba students, and free for Catawba students, faculty and staff members. Buy these online at www.catawba.edu/theatretix or for tickets and additional information, call the box office at 704-637-4481 between 2-5 p.m. weekdays. Tickets must be purchased 24 hours in advance of a performance.