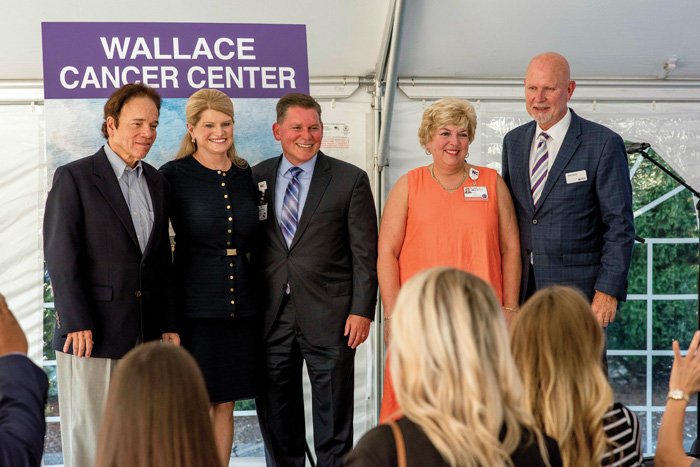 JON C. LAKEY / SALISBURY POST Lee Wallace, Mona Lisa Wallace, Carl Armato, Dari Caldwell and Rick Parker pose for a group photo in September 2018. Community members gathered in a parking lot across from the Novant Health Rowan Medical Center on to make an announcement on the name of the new cancer center. The Wallace Cancer Center is still in the fundraising stage and will be built on the corner of Mahaley Ave and Old Mocksville Road.

SALISBURY — A fund-raising campaign that has been carried on quietly and successfully until now went more public Wednesday evening as Novant Health Rowan Medical Center Foundation revealed the name of its new cancer center.

Salisbury residents Lee and Mona Lisa Wallace were recognized for their lead gift to the facility, which will be named the Wallace Cancer Center.

The $24 million, 30,000-square-foot center is expected to open in the summer of 2020, and Novant Health Rowan aims at consolidating cancer services and programs into one location, creating a single destination for patients.

Under a temporary tent and with many top Novant Health officials in attendance, the hospital foundation held the name reveal on the site where the cancer center will be located — the corner of Mocksville and Mahaley avenues, across from the Smith Heart and Vascular Center.

“Our family felt it was important to support a local cancer center for Rowan County,” Mona Lisa Wallace said in a press release. “Being diagnosed with cancer is frightening and challenging, not only for the patient, but also for family and friends.”

Mona Lisa Wallace is founder of the Wallace and Graham law firm, where she is a practicing attorney. Lee Wallace is a commercial developer with Wallace Realty Company.

Both are Rowan County natives and have been married since 1976.

This is a second significant building in Salisbury which will carry the Wallace family name. The Wallace Educational Forum on North Main Street serves as administrative headquarters for Rowan-Salisbury Schools.

The Wallaces attended the event but asked Rick Parker, executive director of the hospital foundation, to speak for them. They also asked that the amount of their gift not be publicized.

“Over the years,” Mona Lisa Wallace said in a statement read by Parker, “Bill Graham and I, as well as others at Wallace and Graham, have represented hundreds of Rowan County citizens suffering from various cancers who have more often than not, had to travel to medical facilities outside Rowan County for their care.

“Even if they have received treatment locally, they have been shuffled from place to place for different assistance.”

Dari Caldwell, president of Novant Health Rowan, said with cancer especially, the patient faces three layers of suffering — the diagnosis, the treatment and trying to navigate the healthcare system.

The cancer center will try to remove that third layer of suffering, Caldwell said.

“This remarkably generous gift from Lee and Mona Lisa Wallace will help strengthen our community and transform cancer care for thousands of patients in a single destination right here at home,” Caldwell added in a statement released prior to the name reveal. 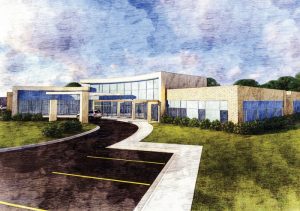 As proposed, the Wallace Cancer Center will offer a wide range of diagnostic and cancer treatment services under one roof, including medical oncology, radiation oncology, infusion, PET imaging and integrative medicine.

Other services will include genetic counseling, access to clinical trials and research, palliative care and nurse navigation. Special amenities and support services will take in a resource library, areas where patients can meet for support groups and workshops, a wellness garden, a “Look Good, Feel Good Boutique” and a gift shop that will be run by the hospital’s auxiliary.

The facility also will have space for physicians to meet in collaborative teams to discuss leading-edge treatments for cancer patients, such as Tumor Board and interdisciplinary Breast Cancer Conference.

“Rowan County is fortunate to have such a fine hospital and excellent physicians willing to invest and to support an innovative and centralized cancer center,” Lee Wallace said as part of the couple’s statement. “We encourage others to invest in this worthy cause as well.”

Novant Health has promised to invest a matching $12 million to build the new facility.

Carl Armato, president and chief executive officer of Novant Health, recalled standing before the local board of then Rowan Regional Medical Center 11 years ago and making some aggressive commitments.

The parties at that time agreed in improving the delivery of healthcare one person at a time, that everyone deserves “remarkable care” and that this kind of care should be delivered at home, Armato said.

“That truly began the journey we’re on today,” he said. “… I’m excited about what we’re ready to launch.”

Armato thanked the local donors to the campaign so far, many of whom were in the audience. “This is a journey, this is a beginning,” he said.

Jesse Cureton, executive vice president and chief consumer officer for Novant Health, helped Parker in removing a cloth hiding an artist’s rendering of the cancer center with its new name.

Bill Wagoner and Tracy Smith have led the initial fund-raising efforts locally. That campaign now goes public in trying to raise the remaining $4,575,000.

Seamus Donaldson, immediate past chairman of the hospital foundation, noted the cancer center was “something very personal with me,” because his 14-year-old son, Colin, was diagnosed with cancer in April.

Donaldson said he understood now the benefits of having cancer care under one roof and the delivering all the resources in one spot. Colin is recovering, and the care he received is why he’s here today, Donaldson said.

For more information or to make a donation to the Wallace Cancer Center, visit SupportNovantHealth.org/Rowan or contact Parker, executive director of Novant Health Rowan Medical Center Foundation, at 704-210-6880.