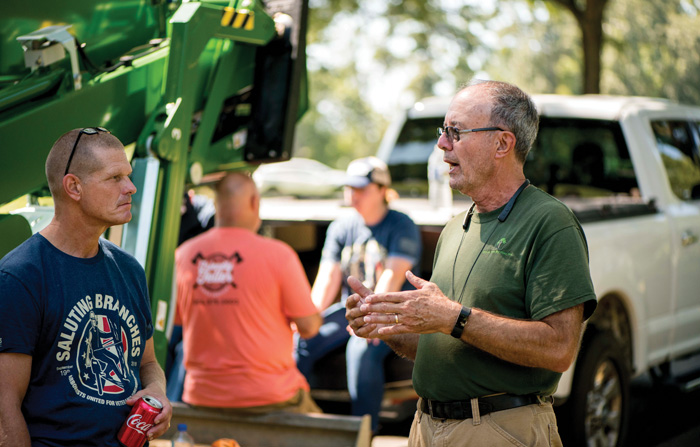 JON C. LAKEY / SALISBURY POST David Whitley (left) talks with Charles Smith (right) during lunch break. Every September the non-profit organization Saluting Branches fans out across America to veteran cemeteries to offer free professional tree service by arborist to honor veterans and their final resting places. On Wednesday, twenty-five arborist gathered at the Salisbury National Cemetery (501 Statesville Blvd) to trim back the trees that line the entrance to the cemetery. . Salisbury, NC. (9/19/18)

SALISBURY — Just three and four years ago, Clay Smith joined his fellow arborists in devoting a volunteer day to trim limbs and make trees safer and better shaped at the Salisbury National Cemetery.

The annual day is called “Saluting Branches,” with the tagline “Arborists United for Veterans Remembrance,” and it rolled around again Wednesday.

Across the country, 2,700 arborists were working at 53 different national cemeteries in 35 states.

Saluting Branches came to the Salisbury National Cemetery for the fourth year in a row. But for the past two years, the always enthusiastic Smith was not there, at least not physically.

In August 2017, Clay Smith died of lung cancer at age 41. His final days were spent at the hospice at the Hefner VA Medical Center, and as a Marine, he was buried in the Salisbury National Cemetery next to the VA.

Many of the two dozen arborists who worked Wednesday along the entrance drive into that portion of the National Cemetery knew Clay. His father, Charles Smith, a retired tree man himself, was part of the crew.

“He thoroughly enjoyed it,” Charles said of his son’ s fondness for the Saluting Branches day and the tree business in general. Clay was an internationally certified arborist and a member of the Charlotte arborist chapter.

Clay loved any of the technology associated with the work.  “He was a gadget kind of person, anyway,” Charles Smith said.

Charles, who lives in Midland, visits his son’s gravesite a couple of times a month.

If Clay wasn’t present physically Wednesday, Charles had to feel his son was there spiritually.

David Whitley, site leader and a certified arborist with Heartwood Tree in Monroe, worked side-by-side with Clay in years past. He said Wednesday’s work was a good way to honor all veterans, but the day becomes even more special because Clay is buried here.

“It kind of brings a personal touch with him,” Whitley said. “Clay sticks out in my mind the most. If nobody else was buried here, I’d still come out to be with Clay.”

Arborists from the two Carolinas participated Wednesday. Whitley said the numbers are usually bigger, but many tree services are helping with hurricane-relief efforts elsewhere.

The work done each year at the cemeteries honors veterans first of all, but it also creates safer, more aesthetically pleasing environments for visitors and families, Whitley said.

Most of the work the past three years occurred at the older National Cemetery section off Railroad Street, so its trees are in pretty good shape.

Whitley figured six or seven different companies were represented Wednesday, along with guys who worked alone.

“It’s pretty amazing to shut your business down and provide a day of service,” Whitley said. “It’s very rewarding.”

Jason Hogan, assistant director for the Salisbury National Cemetery Complex, gave words of thanks to the men and women arborists as they gathered around before leaving Wednesday.

Whitley asked everyone to gather for a group picture, then stay for a raffle drawing for a specially colored Saluting Branches rope, given away at all the cemetery sites. After that, Whitley said, they could shake hands and go home.