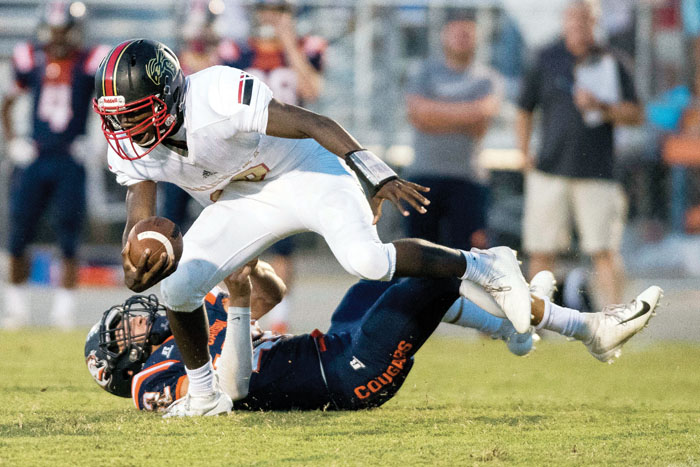 SALISBURY  —  On a Wednesday night when state player of the week Cameron Gill was going absolutely crazy with three interceptions and 300 yards in returns, senior Raheim Walker quietly managed to inject some life into Salisbury’s slumbering running game.

In the 48-18 Central Carolina Conference victory against West Davidson at Ludwig Stadium, Walker broke two long scoring bursts around the left side in a five-minute span. Up to that point, the Hornets (2-2, 2-0 CCC) had managed only two rushing touchdowns all season.

Walker went 27 yards down the sideline at the 4:52 mark in the third quarter for a 24-12 lead. On the last play of the third quarter, he threw the knockout punch for the Hornets with a 49-yard jaunt for a 34-12 lead.  Both of those scoring plays looked almost identical.

“The key thing for a running back is being patient, letting guys make their blocks, and I got great blocks on the outside from receivers Patrick Taylor and Tyrone Johnson,” explained Walker. “I followed the blocks, and then I just hit it. Those were pretty easy touchdowns because of my teammates.”

Walker also contributed in the passing game. His 21-yard reception set up Salisbury’s first score of the game.

While things went very well on Wednesday, was a time when Walker’s football career appeared to be over.

“I hurt my back in eighth grade and after that I was kind of concerned about being injured again,” Walker said. “I didn’t play football for two years, but then my friends and teammates talked me into coming back out my junior year.”

He was assigned the No. 10 jersey, a number usually associated with quarterbacks, kickers — or soccer players.  He liked it. He joined the running backs. His greatest assets were vision and tenacity.

Walker (5-10, 165) proved a surprise addition to the offensive backfield in 2017, head coach Brian Hinson’s first season at the helm. He led the Hornets with 454 rushing yards and scored five touchdowns. He averaged 6.6 yards per carry.

“He doesn’t look like the fastest kid, but when he hits a crease no one ever seems to catch him,” Hinson said.

Salisbury was almost a 50/50 team as far as rushing and passing last season, but Hinson wanted to commit more heavily to a spread passing game this season. While that meant fewer offensive touches for Walker, it also meant more opportunities for the Hornets to employ him as a safety on defense.

“It’s all good, I’ve been learning the safety position,” Walker said. “We’ve got a very hard-working defensive backs coach (basketball head coach Bryan Withers) and he pushes us to get better every day. Defense has gotten more fun now that I’ve learned all the assignments and know where I’m supposed to be. I’m  executing better.”

Walker came through with a big interception in Salisbury’s 10-7 comeback win at Thomasville two weeks ago.

“My first interception, so it felt really good,” Walker said.

Out of necessity, Hinson said he’ll continue to use athletes such as Walker, Gill and Luke Holland on both sides of the ball.

“We want our linemen to play either offense or defense, but at a school our size we really need the skill guys to be able to help us both ways,” Hinson said. “We have them concentrate on one side of the ball, but they’re still getting some practice reps and learning the assignments on the other side.”

While Salisbury’s offense remains a work in progress — the Hornets are still last in the county in yards gained per contest — they’ve compensated with a defense that has allowed the fewest  yards in the county. Salisbury has been exceptional against the pass, with 11 interceptions. Six different players have accounted for at least one pick, and the Hornets have yet to allow 100 passing yards in a game.

There’s one more positive regarding Walker. While it’s only his second season in a Salisbury uniform, he’s become one of the team leaders.

“On the offensive side of the ball, he’s become really important as far as his leadership,” Hinson said. “Our coaches nominate game captains each week, and he’s one of the guys that gets nominated every week. He’s been one of our most consistent players all season.”

Next for the Hornets on Friday is a home game with Lexington, a passing team. Look for Walker to play a key role.