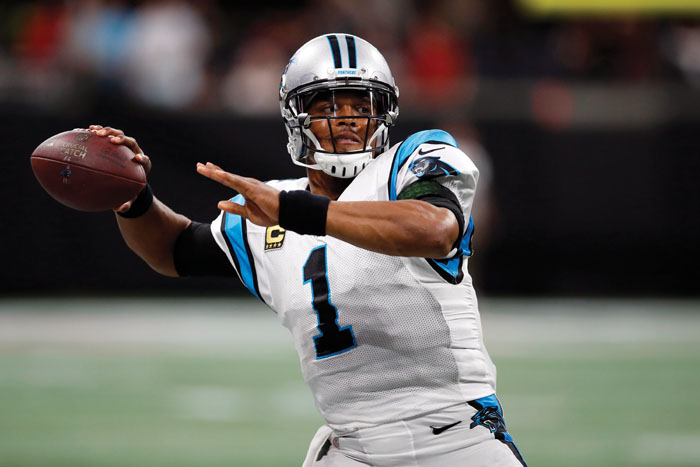 Carolina Panthers quarterback Cam Newton (1) warms up on the sidelines against the Atlanta Falcons during an NFL football game, Sunday, Sept. 16, 2018, in Atlanta. (Jeff Haynes/AP Images for Panini)

It’s only been two games, but the Panthers’ eighth-year quarterback is completing a career-best 69 percent of his passes — well above his career completion mark of 58.3 percent — entering Sunday’s game against the unbeaten Cincinnati Bengals.

Those numbers may not turn a lot of heads, but the Panthers (1-1) believe it’s a sign that Newton is gaining a solid grasp on new offensive coordinator Norv Turner’s scheme and developing as a passer. He’s being more patient, often working through his progressions and finding his second, third and sometimes fourth options on pass plays.

That was evident last Sunday when Newton completed 14 passes to running back Christian McCaffrey resulting in 102 yards — most of those on “check downs,” where Newton was forced to read the defense and wait until the play developed before releasing the football.

“He’s made a lot of good decisions these first two games,” coach Ron Rivera said. “I’m real excited about the progress Cam has shown in terms of understanding and getting a feel for what coach Turner wants.”

The 2015 league MVP completed 32 of 45 passes for 332 yards and two touchdowns in a 31-24 loss to the Falcons on Sunday —  although those numbers would have been higher had his receivers not dropped five passes, including one bobbled ball that resulted in Newton’s only interception of the season.

“He was patient, he went through his reads and he didn’t force balls in,” Rivera said. “And he threw check downs when he needed to. And that was huge. … Not always do you have to force the ball in or take off running.”

Newton said it’s just a matter of learning to take what the defense gives him.

One of the biggest keys, he said, is trusting teammates around him to do their jobs — the offensive line giving him time to work through his progressions and receivers making plays with the ball in their hands.

That happened against Atlanta when Newton found D.J. Moore — his second option — with a pass over the middle that the speedy rookie wide receiver caught and turned into a 51-yard touchdown.

“Wherever the read takes (me) I have to get the ball out of my hands and allow those guys to” make plays, said Newton, whose completion percentage ranks 15th in the league.

“That has been a bigger part of what they doing, no doubt,” Bengals coach Marvin Lewis said of the check downs.

McCaffrey was drafted last year with the purpose of giving Newton an option when things begin to break down, instead of having to tuck and run as often.

The running back from Stanford set a franchise rookie record with 80 receptions. This year, he’s on pace to double that output.

McCaffrey is unlikely to get to 160 receptions because at some point teams are going to adjust and take him away. But the Panthers are counting on that, figuring it will open things up downfield for other receivers.

“Eventually teams will have to start to play that,” McCaffrey said, “and that’s when it all opens up.”

While Newton’s intended target may change as the season unfolds, Panthers wide receiver Torrey Smith said Newton has a good chance of maintaining that 69 percent completion rate — or even improving on it.

“Cam has been working his tail off and he has been making great decisions,” Smith said.

Newton said he couldn’t care less about his completion percentage, as long as the team wins.