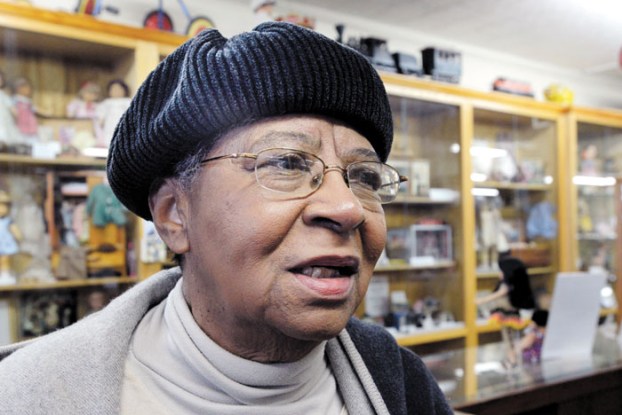 Aggie Harrington, a teacher retired from Salisbury High School, will be honored by Livingstone College. File photo by Wayne Hinshaw, for the Salisbury Post

SALISBURY — A few days ago, Aggie Harrington prepared a meal of short ribs, rice, mixed greens and a pan of cornbread. But it wasn’t for herself, though she may have nibbled a bit. It was for people in need in the community.

Harrington repeats this process of cooking meals for others at least twice a week. For the past 40 years. Out of her own pocket.

This is her ministry, and one of the reasons she is being honored this Saturday with a Community Spirit Award at the Livingstone College West End Classic Football Game.

The game begins at 1 p.m. at Alumni Memorial Stadium. During halftime, Harrington will be among three recipients honored by the college. Byron and Phillip Brown, co-owners of Modern Beauty and Barber Center, are being recognized in the business category; the Blanche and Julian Robertson Foundation is being honored in the community category; and Harrington is in the individual category.

The West End Classic is a partnership between Livingstone College, the City of Salisbury and members of the West End Coalition (West End Pride and West End Community Organization). It is always celebrated during the college’s first home game and is a time to pay homage to the community in which Livingstone resides. This year marks the fifth annual classic game.

Born and raised in Whiteville, about 40 miles west of Wilmington, Harrington graduated from Livingstone College in 1960 with a bachelor’s in education. She started working at Price High School before integration as a secretary and later became a teacher replacing history-maker Elizabeth Duncan Koontz, also a Livingstone alumna.

She started cooking for those in need while she was working, mostly on weekends and holidays.

She would learn of someone coming home from the hospital and not being able to cook for themselves, or someone in a family would relocate to a nursing home and there was no one left at home to cook, or it was a simple sick and shut-in in need of hot meal.

One of her biggest and consistent consumers is the Modern Beauty and Barber Center, where the owners are her former students. She cooks a lot for the barbershop, which provides the meals to customers in need or to referrals from customers. In the wintertime, it could be a big pot of soup for dinner and sausage biscuits for breakfast, she said.

“I don’t give anybody nothing I don’t want myself,” she said. “I buy things on sale. Sometimes I think I will run out, but God always makes a way for me to get more.”

A member of Moore’s Chapel AME Zion Church, Harrington said her pastor preached recently about the woman in the Bible whose jug of oil never ran dry as prophesied.

“She always had enough — and that’s my thing,” she said. “You might not be a millionaire, but you will always have enough if you do it right.”

Julian H. Robertson Jr. established the Blanche & Julian Robertson Family Foundation in 1997 in memory of his parents, who made Salisbury their home.

The foundation’s efforts are directed toward programs and causes that serve the city and encourage its communities to employ innovation, thoroughness and commitment when giving back.

Livingstone College has been a consistent grantee of the Robertson Foundation with the latest grant being awarded this year for scholarships. This foundation has supported the college since 1998 with awards that have assisted the Children’s Book Festival; Heritage Trail brochure; Project HOPE Grant; S.E. Duncan project; Summer Bridge Program; Campaign for Excellence; the 2004 Capital Campaign and Varick Auditorium.

In the past 18 years, the foundation has awarded more than $34 million in grants to 156 organizations and agencies, whose projects address adult and family issues, education, community health, performance and the visual arts, tutoring and childcare, history and preservation, capital improvement and youth activities.

Livingstone College has been a consistent benefactor of the Robertson Foundation with the latest grant being awarded this year for scholarships.

In the past 18 years, the foundation has awarded more than $34 million in grants to 156 organizations and agencies, whose projects address adult and family issues, education, community health, performance and the visual arts, tutoring and childcare, history and preservation, capital improvement and youth activities.

Margaret Kluttz, chair of the board, and Jason Walser, executive director, are expected to accept the award on behalf of the foundation.

‘More than a haircut’

Byron and Phillip Brown are more than barbers, they are community icons. The two brothers are not twins either, but they have mirrored their professional and civic duties over the span of nearly 40 years.

Phillip Brown, the oldest, graduated from Salisbury High School in 1978 and earned his Certificate of Barber Science in 1979 from Harris Barber College in Raleigh.

Brother Byron Brown graduated from Salisbury High in 1979 and earned his Certificate of Barber Science in 1980 from the same barber school.

The two lost their father at a young age and were practically raised by Thomas Randall, who opened Randall’s Barber Shop in 1962. They helped to build the barbershop and swept the floors there after it opened when they were only four and five years old.

Randall retired and the two eventually took over the business, and have been running it ever since.

The Brown brothers have always been active in the community, though Phillip Brown is now retired on disability.

They each have served as visiting barbers to the sick and disabled for 20 years; are members of the NAACP; West End Pride; Moore’s Chapel AME Zion Church; Men’s Crusaders of Salisbury and 32nd Degree Masons, Prince Hall F&A of Rowan County.

Phillip Brown co-developed the Kelsey Park Summer Jams in the late 1980s; and Byron Brown is an original organizer of the local Martin Luther King Jr. Annual Parade. They each have received plaques of appreciation from the Rowan County Brian Center for service to clients there.

Byron Brown has also received the Martin Luther King Jr. Humanitarian Award from the Rowan County Human Relations Council in 1991 and the Friend of Youth Award from Rowan County Head Start for serving as a “Big Brother” and mentor, among many more.

These two brothers have used the barbershop as a central point for political, social and civic engagement, from sharing tidbits of history to inspiring small businesses to shaping local politics.

“It is our pleasure and honor to recognize these recipients who have given back to the West End community through their time, talents and monetary resources,” said Dr. Jimmy R. Jenkins, Sr., Livingstone president. “The West End is a significant part of the history of the City of Salisbury and Rowan County, and we are grateful to do our part in celebrating its people and those who support it by presenting these awards.”

The fifth annual West End Classic will begin at 1 p.m. Saturday at the Livingstone College Alumni Memorial Stadium when the Blue Bears take on the Lincoln Lions of Pennsylvania.

But the fun begins before the game.

This year, Livingstone College, in conjunction with the West End Coalition, will hold a free pep rally from 10 a.m. to 12:30 p.m. on the front lawn of the college. The rally will feature bands, music, vendors and voter registration.

Vendors will range from jewelry and accessories to soul food and make up.

Music will include the Livingstone College Blue Thunder Marching Band, the House of Prayer Brass Band, Outreach Christian Ministries Band and a performance by the Dancing Queens and Kings. Livingstone’s Divine 9 (fraternities and sororities) will also be on hand.

West End Classic T-shirts will be on sale for $10 each.

Those attending the pep rally can get a voucher to attend the game for only $5. General admission is $15.

The West End Classic is sponsored by Livingstone College, the city of Salisbury and the West End Coalition