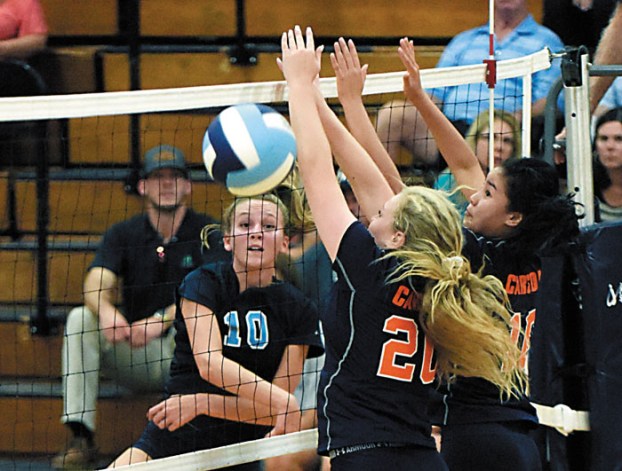 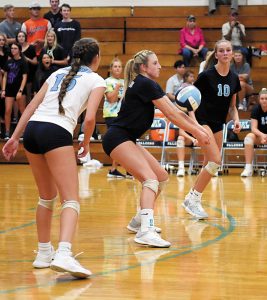 West’s KK Dowling 5 in center, passes the ball to the setter … Photo by Wayne Hinshaw, for the Salisbury Post

MOUNT ULLA — It was an unusual volleyball match for Rowan County.

There was a major crowd on both sides of the gym, including dueling, chanting student sections from West Rowan and Carson like you see at a heated basketball game.

When West Rowan’s Allison Ennis ended Thursday’s match with an ace, West students, all clad in white, swarmed the floor  like the Falcons had won the state title.

“Yeah, I’m pretty happy right now,” beaming West head coach Jan Dowling said. “Not just because this was a great team win in a conference match, but just seeing this this kind of excitement for volleyball in Rowan County. I’ve tried to tell our girls that volleyball can really be good, that  it can really be exciting, and they’re starting to believe that. They had some fantastic support today.”

Carson played in front of throngs when it won regional championships in 2012 and 2013. This is uncharted territory for West.

“When I played at West, we were undefeated for a long time my senior year, but we never had a crowd like this in this gym,” Dowling said.

The teams entered the showdown with identical records. West Rowan exited 12-1 and 3-0 in the North Piedmont Conference, while Carson fell to 11-2, 2-1.

West junior Tori Hester, a Troy commit, proved again that she’s the strongest player in a county that has a number of standouts. She had 24 kills, 19 digs and five blocks, and when the Falcons needed a key point, she defied gravity and delivered it.

Lefty sophomore KK Dowling, the coach’s daughter, also flew all over the place, producing 12 kills and 20 digs. She brought some fist-pumping, screaming fire whenever West hit a lull.

“KK is about 10 times better than she was last year,” Hester said. “She went to a lot of camps. She’s really worked at being a great player.”

Hester supplied the icy calm West needed in a heated atmosphere. Even after making amazing plays, she reacted like there was nothing to it. She just smiled, shrugged and patted a teammate on the back.

Libero Hannah Pratt had 26 digs. Ava Link had 22 assists and nine digs. Ennis had 16 assists and 10 digs. West got contributions from everyone on its eight-person roster. Carly Stiller, Emma Gusler and Kelcie Love had their moments at the net.

“Our team chemistry is really good,” Hester said. “It’s great to have a rival like Carson to bring out a crowd like this and it was big for us to play well in a match like this. This was fun. This is a  match we’ve been talking about for a while.”

The first set was  back and forth at 11-all when Hester sparked a sudden West surge to 16-12. A powerful kill by Hester made it 22-16. Love had a kill for 24-18. The set ended on an uncharacteristic missed serve by the Cougars.

“It was a poor performance by us today,” Carson coach Kelan Rogers said. “Maybe some of that was what West did to us, but a lot of it  we did to ourselves. We haven’t played real well lately. We’re in a little bit of a slump.”

West took control of the second set very early, scoring five straight for a 6-2 lead, and then keeping the Cougars at bay. Nancy Gamewell had several blocks for the Cougars, but they couldn’t make a move. Hester ended the set with a kill, and West was in command, 2-0.

Carson wasn’t interested in being swept and took the third set. The Cougars rode the play of Jaden Vaughn, who finished the evening with 14 kills, 27 digs and six blocks.

Kary Hales received serve 41 times for the Cougars and had 23 digs. Mallory Weast had a frustrating day for an elite player but still managed 11 kills and 17 digs. Setter Grace Thomas had 29 assists.

“Weast didn’t have the kills she usually gets and our hitting was off, but that goes back to our passing being off, our sets being off and our serve-receive not being good ,” Rogers said. “It’s not like our girls are ever going to quit,  but  I thought we played timid a lot today.”

West hadn’t beaten Carson at home in many years, and there was anxiety in the home crowd after West dropped that third set. But the Falcons answered the bell. They dominated the Cougars at the outset of the fourth set.

“I told them after we lost that set that we’d let up and Carson is never, ever  going to quit,” Coach Dowling said. “We needed to put the hammer down, and that’s what we did.”

Link was serving to start the set. Those first few points were critical. She did her job.

“We knew at the start of that fourth set we had to get back to playing our game,” KK Dowling said. “There were a couple of times today when we got down, but we always got it back.”

Even down 13-2, and with fans trickling out, Carson wouldn’t go away. Led by Vaughn, the Cougars got back as close as 22-17, but the Falcons closed the deal.

“We had about nine serve-receive errors, seven in a row, to get in that hole,” Rogers said. “We fought, but no matter how hard you fight, you’re probably not going to get all the way back from 13-2. Not when the other team has Tori Hester. She’s pretty freakin’ good.”