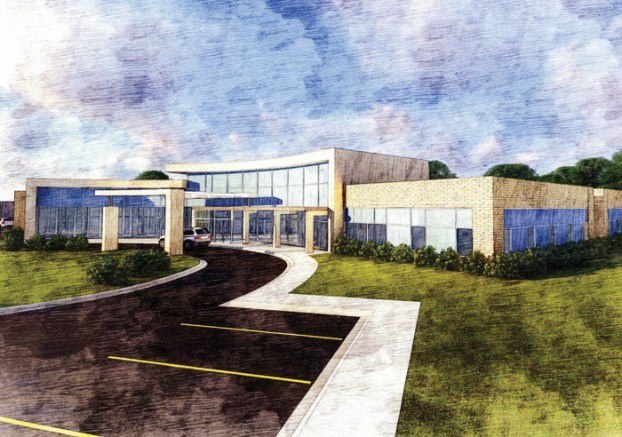 A rendering of the proposed Wallace Cancer Institute.

Darts and Laurels: Cancer Center gets a name

Laurels to Lee and Mona Lisa Wallace, whose unspecified but substantial donation is giving a boost to the cancer center in the planning stages at Novant Health Rowan Medical Center — big enough for the facility to be named the Wallace Cancer Center. For several months, a quiet campaign has been going on to raise major gifts for the $24 million center. Novant Health pledged $12 million to the cause. The Rowan hospital foundation has raised more than $7.4 million toward its $12 million share, thanks to the generosity of several local families.

Lee Wallace and his family have shaped Salisbury real estate development for generations, and Mona Lisa Wallace has forged a phenomenal legal career. Together, they have stepped up as leaders in local philanthropy, and they are making a difference.

Dealing with cancer is never easy, but having cancer services available in Salisbury under one roof will simplify treatment for people going through what could be the most difficult time of their lives. Many thanks to the Wallaces for helping to make that possible.

Dart to the heartbreak that can result when people ignore advice to “Turn around; don’t drown.” Countless public reminders went out as Hurricane Florence’s rains caused creeks and rivers to overflow. Still, a mother in Union drove past barricades on NC 218 that she said had been moved aside and ran into deep water. As she tried to escape her vehicle, her 1-year-old son was swept out of her grasp by rushing floodwaters. That horrible moment will be with her the rest of her life.

The moment should be with the rest of us, too, any time we see barricades or rushing water — or even when we’re weighing whether to try to drive during a tropical storm.

Laurels to debates about proposed state constitutional amendments on the fall ballot, a subject of confusion and apathy so far in this election cycle.

Salisbury is the site of the first “Hometown Debate,” which will focus on an amendment to change the process for filling judicial vacancies. The debate will be held in the Meroney Theater 7 p.m. Tuesday.

The debate effort is spearheaded by the North Carolina Institute of Political Leadership in partnership with Spectrum News and other state and local organizations. Other debates scheduled are:

• Oct. 2 at the Turnage Theatre in Washington (voter ID amendment).

• Oct. 9 at the Clayton Center in Johnston County (elections/ethics board amendment).

Other Voices: The age of the lockdown