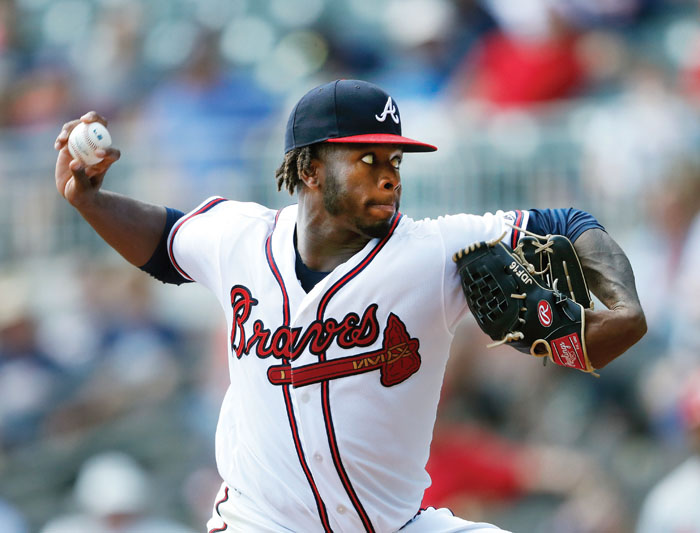 Now that the Braves are back challenging for a division title, the All-Star first baseman knows his club can’t afford any long losing streaks.

“It’s been four days, so I thought this was a big win for our team,” Freeman said. “I thought we played a quality baseball game today and hopefully we can carry that into this Philly series.”

Freeman hit a two-run homer and drove in three runs, Touki Toussaint pitched into the sixth inning and the NL East-leading Braves snapped a four-game skid with a 7-3 victory over the St. Louis Cardinals on Wednesday.

It was a critical win for Atlanta, which is 5½ games ahead of the second-place Phillies and opens a four-game home series against them on Thursday. Philadelphia blanked the New York Mets 4-0 on Wednesday night.

The Braves need any combination of six victories or Philadelphia losses to clinch their first division title since 2013.

St. Louis, which had won three straight, began the day leading Colorado by 1½ games for the second wild-card spot.

Closer A.J. Minter, working in a non-save situation in the ninth, walked two to load the bases, but he ended it by striking out Jose Martinez and getting Paul DeJong to pop up.

Freeman’s 23rd homer, an opposite-field shot to left-center, put the Braves up 2-0 in the fourth against Jack Flaherty. Freeman went 3 for 3 and is hitting .405 over his past 11 games.

“He’s getting the ball in the air, and it’s carrying, and that’s always a good thing,” manager Brian Snitker said. “That’s a welcomed sight if we can get him going.”

Toussaint (2-1) allowed five hits, two runs, three walks and struck out eight in 5 2/3 innings. A rookie making his fourth career start, Toussaint was chased after Yadier Molina’s RBI single cut the lead to 5-2 in the sixth.

“We survived the first couple of innings with essentially zero fastball command, then suddenly we had some decent command of it and were able to flip the script and challenge guys with some early contacts,” Braves catcher Tyler Flowers said. “If he gets ahead of guys, it’s a tough arsenal to defend.”

Flaherty (8-8) gave up five hits, a season-high five runs and two walks with six strikeouts in 4 2/3 innings. Facing the Braves for the first time, Flaherty began the game as the NL rookie leader in strikeouts, winning percentage and opponents’ batting average. He had gone 4-1 with 1.69 ERA in his previous eight starts.

Flowers doubled to begin the three-run fifth and scored on a wild pitch. Freeman chased Flaherty with an RBI single, and the lead swelled to four runs on a double steal by Ender Inciarte and Freeman. The Braves successfully challenged to get the call overturned that Freeman had been tagged out.

Atlanta added a run to make it 6-2 in the seventh. Inciarte doubled and scored when second baseman Kolten Wong threw errantly to first on a potential double play grounder.

Jedd Gyorko’s sacrifice fly in the eighth cut the lead to 6-3. Flowers’ eighth homer in the bottom half of the inning made it 7-3.

At least for one game, Atlanta played well at home, where it had dropped 14 of 18 and has won just one of its past seven series.

Freeman, who became the first Braves first baseman with 20 homers and 10 stolen bases in a season since Dale Murphy in 1978, wants his teammates to enjoy the pennant race and not press.

“It’s fun. It really is,” Freeman said. “This is what you work for six, seven months. To be in this situation this year, it’s the greatest feeling there is.”

Harrison Bader was hit in the back of the helmet by a pitch in the third, but he convinced St. Louis’ trainers that he wasn’t affected and jogged to first. Going deep against Toussaint for his 12th homer in the fifth, Bader said he felt no measure of revenge. Toussaint wasn’t trying to hit him.

“The two are completely independent of each other, honestly,” Bader said.

“I was just trying to make a good swing.”

Cardinals: RHP John Gant (7-6, 3.53 ERA) will start when St. Louis, following a day off, opens a three-game home series against San Francisco. He allowed six hits and six runs in his previous start, a 17-4 loss to the Dodgers.

Braves: RHP Kevin Gausman (10-10, 3.92 ERA) will make his ninth start since being acquired in a trade with Baltimore as Atlanta tries to pad its lead on the Phillies. He is 3-0 with a 2.45 ERA in four starts at SunTrust Park.