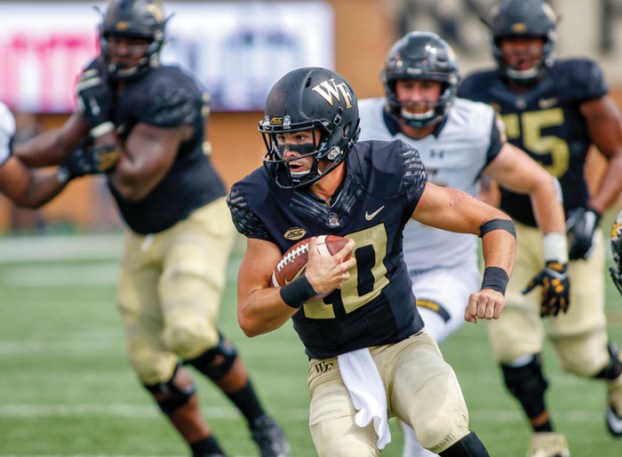 ACC QBs making name for themselves 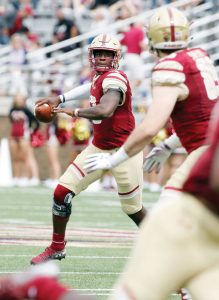 FILE – In this Sept. 8, 2018, file photo, Boston College quarterback Anthony Brown (13) scrambles as he looks to pass during the first half of an NCAA college football game against Holy Cross, in Boston. Check out the FBS passing leaders and it is Brown who is No. 1.(AP Photo/Mary Schwalm, File)

BOSTON (AP) — Louisville is still looking for an heir to Heisman Trophy winner Lamar Jackson. Boston College and Syracuse had quarterbacks coming back from injuries. Wake Forest was only looking for someone to fill-in while starter Kendall Hinton was suspended and may have found itself a long-term replacement

Many of the Atlantic Coast Conference schools that had quarterback questions coming into the season seem to have found a solution. And that’s made the league deeper and more competitive than it might have seemed this summer.

Addazio is hoping that the No. 23 Eagles (3-0) have solidified the position after struggling to find consistency for most of his first five years in Chestnut Hill.

Anthony Brown, who tore his ACL last Nov. 11 after leading the Eagles to three straight ACC victories, leads the nation in passing efficiency, and BC has scored 40-plus points in each of its first three games for the first time in the school’s 120-year football history.

Brown threw for a career-high 304 yards in Thursday’s 41-34 victory over Wake Forest, making him the first BC quarterback since Matt Ryan to throw for more than 300 yards and five touchdowns in a game. Brown is the second Eagles QB ever — joining Doug Flutie — to throw for five or more scores in a game without an interception.

“I think you’re seeing him mature right now,” Addazio said. “Essentially he’s still finishing his first season right now. So, his best days are still ahead of him. But he is a talented guy. That showed.”

Here is a look at quarterback developments at some other ACC schools:

Sam Hartman won the job in camp after presumptive starter Kendall Hinton was suspended for three games for violating team rules. The former backup is second in the ACC with 278 passing yards per game to go with six touchdowns and five interceptions.

Addazio, for one, is impressed.

“I didn’t know much about this freshman at Wake. Other guy is suspended, they don’t have a quarterback. I think they got their quarterback,” the BC coach said. “They’ll have a few good years ahead of them with that cat right there.”

Hinton’s suspension is over, but Hartman remains the Demon Deacons’ starter. Coach Dave Clawson listed the freshman with the first string and Hinton as the backup, but coyly suggested this week that Hinton could play a role in other ways against No. 8 Notre Dame.

After winning the national championship with Deshaun Watson in 2016, Clemson turned to Kelly Bryant last year and made it back to the College Football Playoff. But this year, Bryant has been sharing time with freshman Trevor Lawrence.

There isn’t much to separate them on the stat sheet: Bryant has completed 30 of 44 passes for 406 yards, two touchdowns and an interception, and Lawrence is 26 of 42 passes for 424 yards, five touchdowns and an interception. Co-offensive coordinator Jeff Scott said the staff has looked at drives that stalled and can’t blame many on the quarterback.

The players say they’re comfortable with the arrangement, too.

“Kelly and I support each other, and we’re going to compete and try and get better,” Lawrence said. “We’re still on the same team. We’re still trying to accomplish the same goals.”

After missing the last three games last season with a broken foot, Eric Dungey was poked in the eye in the first half against Florida State and didn’t return for the second half. Redshirt freshman Tommy DeVito led the Orange to a 30-7 victory, completing 11 of 16 passes for 144 yards and a touchdown.

Coach Dino Babers said Dungey will be OK to go on Saturday against UConn.

Junior Deondre Francois won a three-way battle in the preseason, and his job seems to be safe even though the Seminoles started 1-2. Even with limited mobility from last September’s knee injury, his running ability still makes him the best fit for coach Willie Taggart’s offense.

Instead of making a change at QB, the Seminoles hope to stabilize an offensive line that has had to replace Derrick Kelly and Landon Dickerson. Other than center Alec Eberle, none of the lineman taking first-team snaps in Tuesday’s practice had started a game before this year.

Behind the makeshift line, Francois was pressured on 19 of 41 dropbacks in the loss to Syracuse, according to Pro Football Focus.

“It’s not about his talent,” Addazio said. “When he has a chance to stand there and throw it, he throws it.”

On the other hand, there’s Louisville, where Malik Cunningham will replace Jawon Pass as starter for Saturday’s game at Virginia. Cunningham replaced Pass in each of the last two games and led the Cardinals to second-half comebacks.

“That’s my job: come off the bench, and whenever my name is called, be ready,” Cunningham said. “I’m always going to be ready.”