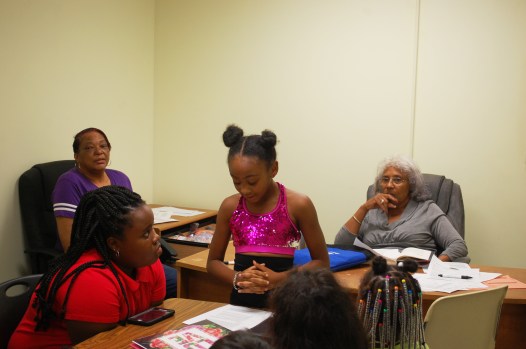 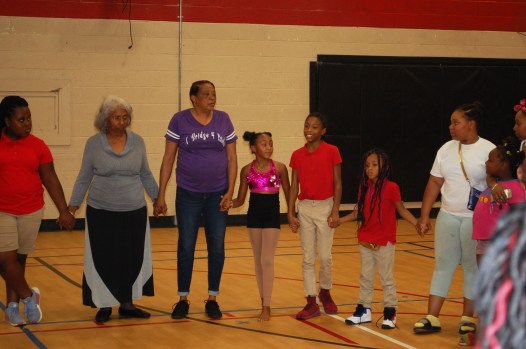 Sharon Freeman-Johnson holds hands with her granddaughter Brooklynne Witherspoon, a founder of A Bridge 4 Kids. All attendees and their parents held hands and said what they were grateful for at Hall Gym on Wednesday night. 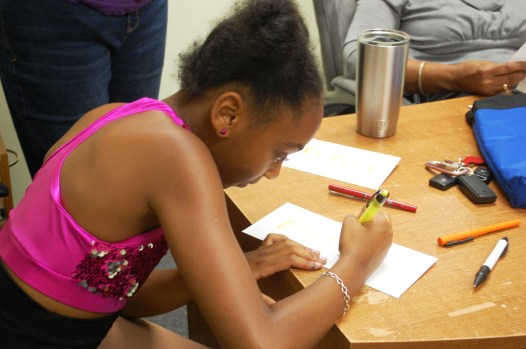 Brooklynne Witherspoon writes thank you notes to Rev. Latasha Wilkes and Kelly Taylor Biggers for their help with A Bridge 4 Kids on Sept. 19.

SALISBURY — Brooklynne Witherspoon is 10 years old, an older sister and on a dance team. She also started A Bridge 4 Kids, a program to keep kids be active in the community.

“The reason that I started my program because my little cousin, which is A’yanna Janae Allen who died when she was seven,” Witherspoon said. “She wasn’t like a cousin to me. She was like a sister to me. She was always around since she was little. When she died, she took a part of me. I wanted to do something so I wouldn’t be so sad about that. I made it into something that could do something in the community instead of being quiet and crying about it.”

On its second year, Witherspoon has a goal to get out in the community more to make it a better place. She wants participants to interact with police officers and firefighters and to give back to the elderly community

“If a teenager get pulled over by the police for running red light — let’s say that, they’re mostly going to panic,” Witherspoon said. “We’re trying to teach them now when they’re younger so when they’re older and when different scenarios like that happen they can use what we taught them when they were young and use that carry themselves on. We’re also teaching them self-esteem, because that’s a big thing that a lot of people don’t have, so that’s why a lot of people do bad things.”

A Bridge 4 Kids had grand re-opening at Hall Gym on Bank Street Wednesday. The program will meet regularly Tuesday and Thursday nights at 5 p.m. Witherspoon said she wants A Bridge 4 Kids to be accessible to kids who may not live in the best areas.

“I like to work in a hood,” Witherspoon said. “The more kids we get from there they’ll have more opportunities, because I feel like they don’t get them involved and educate them now. If we don’t, they’re going to end up doing bad things.”

Witherspoon’s grandmother, Sharon Freeman-Johnson, is the mentor for A Bridge 4 Kids. She said after the death of her cousin, Witherspoon was really sad and the program has helped her refocus her energy and memorialize A’yanna.

“Instead of being sad, remember the good times you had, because that’s what God wants you to do,” Freeman-Johnson said. “So now not only did she remember the good times, she also motivated herself and put something through. Even as an adult if we could just get that concept, think of how this world would be — not only her city but the world how much better it could be.”

Witherspoon’s mother Erika said she is proud of her daughter and has watched her handle conflicts at school with grace.

“She will impact the kids and our future,” Erika Witherspoon said. “Her energy that she puts out to for girls and boys. I do think she’ll change some things in Salisbury and in our community.”

Witherspoon said the message A’yanna would give to her is “Brook, I am so proud of you.”