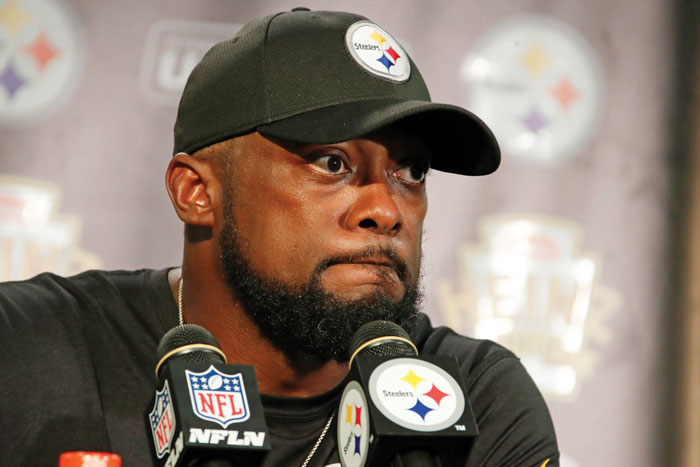 By WILL GRAVES, AP Sports Writer
PITTSBURGH (AP) — The Pittsburgh Steelers have been here before. Often in fact.
A jarring early-season misstep filled with mental breakdowns and missed opportunity is kind of their thing.
So too, it seems, is finding new ways to explain the erratic behavior of All-Pro wide receiver Antonio Brown.
Even a day removed from a 42-37 home loss to Kansas City that dropped the two-time defending AFC North champions to 0-1-1, the talk didn’t center on a defense that gave up a franchise-record tying six touchdown passes , but on the latest outburst by the talented if mercurial Brown.
The four-time All-Pro — who caught nine passes for 67 yards against the Chiefs — responded to a tweet by a former team employee who suggested Brown wouldn’t put up his eye-popping numbers without quarterback Ben Roethlisberger by suggesting “trade me let’s find out.”
The post caused an immediate stir on social media but not in the Pittsburgh locker room, even after cameras caught Brown venting on the sideline in the second half and slowly trudging off the field even as his teammates celebrated Roethlisberger’s diving 3-yard touchdown run with 1:59 to go that pulled the Steelers within five.
Brown did not make himself available to media afterward and was nowhere to be found Monday, leaving his teammates to try and explain away his behavior. Again.
“I’m not worried about his frame of mind,” veteran wide receiver Darrius Heyward-Bey said. “I know football is No. 1 to him. He works his butt off to be the great player that he is. As long as he brings that same energy in practice and brings that same energy to the game, I don’t have any problem with him, because I’ve seen guys who don’t care in this league and they don’t last long.”
The issue with Brown has never been work ethic. The former sixth-round pick is the only player in NFL history to post five consecutive seasons with at least 100 receptions. Yet the 30-year-old has become increasingly volatile. During minicamp he complained about having the spotlight on him , then arrived at training camp in a helicopter . He called a reporter who noticed him limping off the field during workouts at Saint Vincent College — in full view of fans — a clown. Last Friday he issued a bizarre soliloquy about his status, calling himself “an exceptionalism” before adding he’s “not an ordinary guy.”
Of that there is no doubt. And his teammates stress there is no issue with everything that comes with having Brown in the fold.
“AB is a hell of a player and I’m glad he plays for our team,” defensive end Cam Heyward said. “It’s as simple as that. I wouldn’t trade him for anybody in the world.”
At the same time, Heyward made it a point to steer the topic away from Brown, who had nothing to do with Pittsburgh’s defensive issues against the Chiefs.
“If we ain’t talking about football, we’re talking the wrong thing,” Heyward said. “All this other stuff is beside the point.”
The point being the Steelers find themselves preparing for a Monday night trip to surprising Tampa Bay (2-0) at crossroads, familiar territory during their run to four straight playoff berths.
Last fall, it was the national anthem debacle that preceded an overtime loss to Chicago. Two years ago they started 2-0 only to get drilled on the road in Philadelphia by a rookie quarterback named Carson Wentz. In 2015 they celebrated the first day of October by blowing a fourth-quarter lead at home to Baltimore. Back in 2014 they allowed Tampa Bay’s Mike Glennon to spark a late rally at Heinz Field, one of two games the Buccaneers would win all season.
Each time, the Steelers chose patience over panic. Each time, they recovered to reach the postseason.
“I think you panic when you know you’ve lost control,” Heyward Bey said. “We haven’t lost control.”
Maybe, but it looked like that way at times against Kansas City. The secondary, playing without injured veteran cornerback Joe Haden, looked flat-footed at times and lost at others. There was no pass rush to speak of — the only sack came when Chiefs quarterback Patrick Mahomes crashed into nose tackle Daniel McCullers. After spending camp talking about improved communication, the Steelers spent plenty of time looking at each other before Mahomes snapped the ball, as if trying to figure out where they were supposed to go.
“We’ve got to make sure we’re on top of each other,” cornerback Mike Hilton said. “We’ve got to make sure we know what we’re doing so explosive plays like we gave up yesterday don’t happen all the time. It’s a copycat league, so some team might be doing the same thing Kansas City did.”
A team like, say, the Buccaneers. Tampa Bay is unbeaten thanks in large part to 35-year-old quarterback Ryan Fitzpatrick, who has gone over 400 yards in each of Tampa Bay’s first two games. What looked like a mismatch two weeks ago looks far different now.
“It’s a big week,” Heyward-Bey said. “It’s a Monday night game. It’s prime time against a team that’s thrown for a lot of yards and scored a lot of touchdowns and are confident. We’ve got to find a way to light our fire and put theirs out.”
___
More AP NFL coverage: https://apnews.com/tag/NFL and https://twitter.com/AP_NFL