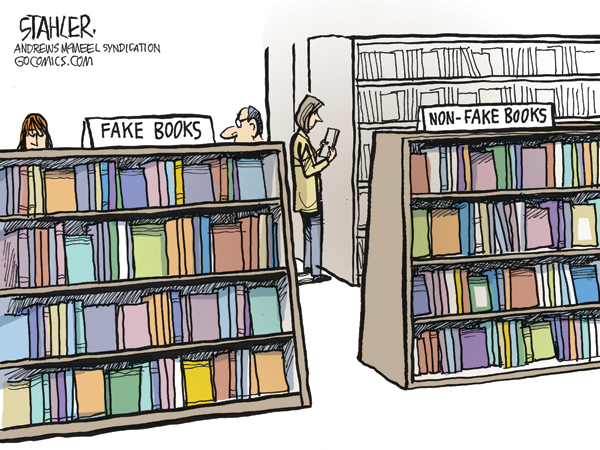 “Where have you gone, Bob Woodward? Our nation turns its lonely eyes to you.”

I asked that question in January, repurposing a Paul Simon lyric to implore the dean of American political reporters to help us make sense of the mess that is the Trump White House. Last week, Woodward finally came through.

That was the release date of his latest book, “Fear: Trump in the White House.” You may infer the public hunger for it from a Washington Post report that a whopping 750,000 copies were sold on just the first day. According to The Post, foreign embassies have been buying the book in bulk. The whole world, it seems, wants a peek inside this sad excuse for a presidency. As an American, one feels an embarrassment roughly akin to finding one’s tattered drawers hanging on a clothes line in Times Square.

Trump has tried to laugh the book off, using tactics that by now seem as familiar as they do desperate and threadbare. “Fiction,” he tweeted. “Joke,” he tweeted. And etcetera.

Problematically for him, however, this isn’t Michael Wolff, whose “Fire and Fury” was marred by reportorial sloppiness. Nor is it some former aide who can be written off as disgruntled. No, Woodward is the real deal, a two-time Pulitzer Prize winner who was making his bones when Trump and his daddy were still scheming how not to rent apartments to black people.

That said, the portrait he paints is quite reminiscent of others we’ve read. Trump emerges as an idiot, an uninformed boor, a mean bully, an idiot, a liar, an incompetent lout, an idiot, a whiny toddler.

But Woodward also teases out – and to a degree arguably no other observer has – a sense of how emotionally and intellectually damaged the man is. No one ever quite says this (though Woodward reports one of his lawyers considers him “clearly disabled”) but the impression rises unavoidably from scene after scene of advisers trying and failing to get the simplest information to take root in his mind.

At one point, one of them asks, “Why do you have these views?”

This impairment, this inability to get past what he thinks he knows in order to absorb and analyze new information, comes into chilling play as his national security team tries to get him to understand the criticality of the nation’s Terminal High Altitude Area Defense (THAAD) system, based in South Korea at a cost of a billion dollars a year.

Trump wants to move it to Portland.

If based in South Korea, his advisers explain (and explain and explain), the system lets us know within seven seconds if North Korea launches a missile attack — giving us precious extra time to shoot it down before some South Korean or American town is obliterated. Put it elsewhere and that seven seconds expands to 15 long minutes.

Yet Trump still wants to move it to Portland. Why? He’s obsessed with the idea that South Korea is pulling a fast one, snookering us into paying for its defense. He doesn’t care about allies or mutual interests. He just cares about getting paid.

It’s worth remembering that Trump was elected because some of us wanted a strongman to turn back the clock on demographic change. But change is still coming. The only question is what kind of nation we’ll be when it arrives. Seldom has the price of intolerance loomed so high.

As Woodward told Stephen Colbert, “We better wake up to what’s really going on.” With “Fear,” he’s done his part. He’s set off an alarm.

We sleep through it at our own peril.