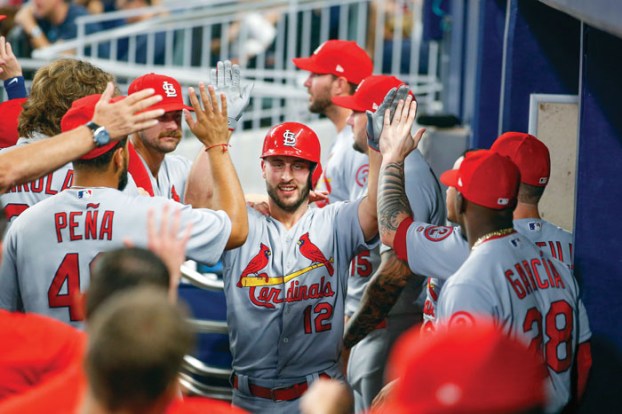 St. Louis Cardinals' Paul DeJong (12) is congratulated by teammates after his two-run home run during the fourth inning of a baseball game against the Atlanta Braves, Tuesday, Sept. 18, 2018, in Atlanta. (AP Photo/Todd Kirkland) 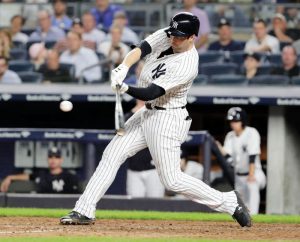 Austin Gomber pitched five effective innings for St. Louis, which holds a slim lead for the second NL wild card. The Cardinals top the National League with 36 victories since All-Star break, and their 43 road wins this season rank second.

Atlanta’s division lead dropped to 5½ games over Philadelphia as the Braves lost their fourth in a row after a season-best six-game winning streak. They are 38-38 at SunTrust Park and have dropped 14 of 18 at home.

The Braves’ magic number remained at seven as they try to clinch a division title for the first time in five years. Philadelphia beat the New York Mets 5-2.

Anibal Sanchez (6-6) allowed four hits and two runs and struck out six in five innings. He faced the minimum through his first three innings and retired his first batter in the fourth before Jose Martinez singled and DeJong hit his 19th homer.

DeJong, who is hitting .500 with four homers and 10 RBIs in five career games against Atlanta, added a run-scoring single in the eighth off Dan Winkler. DeJong’s homer was his 14th on the road.

Gomber (6-1) gave up six hits, one run and three walks while striking out five for his fifth victory in his last six decisions, but it wasn’t easy for the rookie.

After Ronald Acuna Jr. hit his 26th homer to begin the third, Gomber escaped a bases-loaded jam on Ender Inciarte’s lineout to end the inning. Gomber got Inciarte to fly out to strand a runner at third to end the fifth.

Molina’s single in the eighth off Sam Freeman scored three runs. He was credited with two RBIs, and a third run scored because Acuna made an error in left field.

Tyler O’Neill, who entered as a pinch-runner in the eighth, had a run-scoring double and Marcell Ozuna followed with an RBI single to make it 8-1.

After walking 39 in their last five games, the Braves didn’t issue a free pass until the eighth, when Jonny Venters, Winkler and Freeman each walked a batter. Of the 35 runs allowed on this homestand, 15 reached with a walk.

St. Louis has won eight straight games in Atlanta dating to 2016, the best run since the Cardinals took 11 road games in a row from the Braves from 1967-68.

NEW YORK (AP) — Neil Walker hit a three-run homer, Zach Britton started a game-ending double play on New York’s third try in the ninth inning and the Yankees kept the Boston Red Sox from a bubbly celebration in the Bronx for at least another night with a 3-2 victory Tuesday.

Batting from the left side, Walker golfed a no-doubter in the seventh inning off Ryan Brasier for the Yankees’ third hit of the game and a 3-1 lead. Walker dropped his bat, admired the shot for a moment and then pointed into the Yankees dugout as he jogged to first base.

Aaron Judge returned to New York’s lineup for the first time since breaking his right wrist July 26, while AL MVP candidate Mookie Betts got a day off for Boston after injuring his left side Sunday. Judge hit a pop fly to the warning track but finished 0 for 4.

New York entered the night with a 1 1/2-game lead over Oakland for the top AL wild card. The A’s hosted the Angels later.

PHILADELPHIA (AP) — Jorge Alfaro hit a go-ahead, three-run homer in the sixth inning and the Philadelphia Phillies rallied past the New York Mets 5-2 on Tuesday night to boost their faint playoff hopes.

Philadelphia overcame an uneven outing from ace Aaron Nola and a home run by starter Steven Matz that made him the third Mets pitcher to homer in consecutive appearances.

PITTSBURGH (AP) — Pinch-hitter Ryan Lavarnway drove in the winning run with a single in the 11th inning, Jameson Taillon struck out a career-high 11 and the Pittsburgh Pirates beat the Kansas City Royals 2-1 on Tuesday night.

It was just the second at-bat of the season for the 30-year-old Lavarnway, the Pirates’ fourth-string catcher. He hit .288 in 77 games in with Triple-A Indianapolis. Lavarnway has played 142 career games with five teams.

Anthony Rendon drove in two runs for the Nationals (77-75), who moved to within 6 ½ games of the NL East-leading Atlanta Braves, who lost 8-1 to St. Louis.

HOUSTON (AP) — Marwin Gonzalez hit a two-run homer in a four-run third inning that helped the Houston Astros to a 7-0 win over the Seattle Mariners on Tuesday night.

Houston, which eliminated the Mariners from contention for the AL West title with the victory, entered the day four games ahead of Oakland atop the division standings. The Athletics played later against the Angels.

Leake plunked Brian McCann to start the third before Tony Kemp doubled. The Astros took a 1-0 lead when George Springer hit an RBI single, and Springer reached second on the play thanks to an error by left fielder Denard Span. Kemp scored on a groundout by Jose Altuve to make it 2-0.

There were two outs in the inning when Gonzalez sent a drive to left-center that was originally ruled a double. But a replay review revealed it was a homer, pushing Houston’s lead to 4-0.

The Mariners couldn’t get much going against James. He walked Chris Hermann with no outs in the third before a one-out single by Mitch Haniger. After a short visit to the mound, James retired the next two batters to end the threat. He allowed a double to Robinson Cano to start the sixth before striking out Nelson Cruz with his final pitch.

Cano doubled twice and tied a season high with three hits, but the rest of the team managed only three hits on a night when the Mariners went 0 for 9 with runners in scoring position.

The Astros padded their lead in the seventh when Yuli Gurriel doubled with one out and scored on a single by McCann. Houston added two more runs in the eighth, with the first one coming when Tyler White’s fly to left-center dropped right in between Span and Dee Gordon for a double.

Mariners: LHP James Paxton played catch but was not quite ready to throw a bullpen as he continues to build strength after recovering from the flu and pneumonia. … RHP Felix Hernandez (hamstring) is doing better and is expected to rejoin the team Friday before the start of a series against the Rangers.

Astros: RHP Lance McCullers Jr., on the disabled list since Aug. 5 with a strained right forearm, threw a simulated game and will throw another one Friday or Saturday. The Astros hope he’ll be able to return before the end of the regular season.

Left-hander Dallas Keuchel (11-10, 3.57 ERA), who has won his last two decisions, will start for the Astros when the series concludes Wednesday. The Mariners hadn’t announced their starter, but manager Scott Servais said it will be a bullpen game.

By WILL GRAVES, AP Sports Writer PITTSBURGH (AP) — The Pittsburgh Steelers have been here before. Often in fact. A jarring... read more