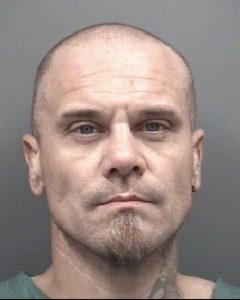 KANNAPOLIS — Kannapolis murder suspect Brandon Hodges was believed to be impaired when he bludgeoned 67-year-old Wanda Upright Kennedy in her Smith Road home a month ago, search warrants allege.

Hodges, of 170 Pleasant Hill Drive, was charged Aug. 29 with first-degree murder. His home is about 100 yards from Kennedy’s home at 8353 Smith Road.

The mother/grandmother had taken her sister to the hospital that morning, but returned. Her grandson, Ronald Helms, was reportedly on military leave. He was asleep when Hodges entered the home and asked: “Where is she at?”

Helms told investigators Hodges assaulted him with a baseball bat and then he stopped. When the assault stopped, Hodges went to a different part of the house and Helms ran to his mother’s home nearby to call 911.

Helms said he did not know his grandmother was home. He thought she’d gone to the store. Investigators found Wanda Kennedy already deceased on the floor. She had a significant head injury, the warrant noted. Hodges was still inside the home.

According to search warrants filed earlier this month, Rowan County Sheriff’s Detective Chad Moose said when he arrived on the scene, some of the things Hodges said led him to believe the 37-year-old was impaired.

He asked the deputies “not to kill him” and the detective noted he was sweating a lot and asked “if I was going to ‘execute’ him,” the warrant said.

Hodges was “extremely agitated” and “seemed very excited” and “unable to focus,” the detective said in the warrant. After his arrest, Hodges was taken to Novant Health Rowan Medical Center to collect a blood sample to determine if and what substance he was under.

Authorities said he stayed overnight in the hospital while in the Sheriff’s Office custody.

Moose noted in the warrant the home was ransacked, numerous items were turned over and broken. There were large holes in several of the walls. A large hole was also visible on the outside the home on the day of the murder as investigators went in and out of the home to process the scene and collect evidence.

Investigators noted Hodges had blood stains on his pants and shoes. Officials collected his shoes. A neighbor told investigators they saw Hodges run toward Kennedy’s home sometime before the break-in was reported. The same neighbor later saw Kennedy’s grandson Ronald Helms run from the house, apparently to call 911 and the neighbor also watched as deputies arrived to the scene.

In the warrant, Hodges admitted he had his cell phone when he went inside the Kennedy home and when the battery died he grabbed a cell from a nearby pocketbook. The purse belonged to Wanda Kennedy, the warrant confirmed. Hodges admitted to detectives that he used Kennedy’s cell phone while inside her home. He still had her phone on him when he was arrested. Authorities collected both cell phones as evidence.

The detective requested a warrant be issued so he could check a Facebook account that belonged to Hodges for any posts that might be pertinent to the investigation.

Hodges is expected in court today to be arraigned where the formal charges will be read to him. He remains in the Rowan County Detention without bond.

Commissioners to consider incentives for potential I-85 development