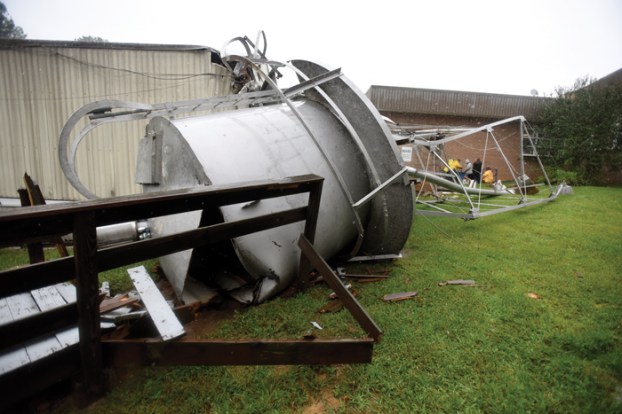 JON C. LAKEY / SALISBURY POST School maintenence workers, Liberty Fire Department personnel and Emergency Services responded to the report of the water tower behind Morgan Elementary School had fallen on Sunday afternoon. Crews reported that the water tower was filled with 4,500 gallons of water when it collapsed. The tower clipped the corner of a mobile classroom and damaged a wooden walkway. The tower held in reserve water supply for the school as well as adding water pressure to the system. A granite pump house next to the tower was slightly damaged.

Down came the rain: Schools suffer some damage after Florence

However, one school will spend the next few months picking up the pieces. Morgan Elementary School was without water Monday, after the school’s water tower fell during heavy wind and rain that blew through over the weekend. The metal structure also damaged a nearby mobile unit when it collapsed, along with part of a metal rain canopy and wooden ramp.

“That was the main water source — potable and non-potable water — for the school,” Vann said of the tower.

Maintenance teams used Monday to clear away debris at Morgan.

The school is on well water, and a ground tank has been installed to provide the more than 4,000 gallons Morgan Elementary uses daily. Though the water pressure may be a bit lacking, Vann said.

“That’s just this temporary measure. That’s not a new tank with new pumps,” he said.

However, repairs and water testing mean students at Morgan Elementary will not return to school until Thursday. The temporary tank cost between $10,000 and $15,000 to procure and install, Vann said. There is no estimate on how much it will cost to replace the water tower.

According to district maintenance personnel, the mobile unit — which had served as an art classroom — is unsuitable for use until repaired. Vann estimated that would cost between $10,000 and $15,000, but it was hard to nail down a specific number Monday afternoon.

However, Vann believes that insurance should cover most costs.

“Based on what I’ve seen insurance should cover everything but our deductible,” he said.

Morgan Elementary School Principal Derek DiStefano assured parents and the community that the damage would not deter faculty and staff from caring for students.

“Safety and quality instruction is always our top priority at Morgan and that the minimal damages caused by the fallen water tower will not disrupt our delivery of either,” he said in an e-mail. “In order to continue education of the whole child, art will be relocated to a space in the building until repairs can be made to the mobile unit.

Apart from Morgan, damage to other schools was very minimal — something Vann credits to the hard work of facilities staff in the days before the storm. Chris Knuckles, district director of construction, oversaw preparations in the absence of a facilities director. Knuckles paused all projects in the week leading up to the storm, and had staff focus on laying sandbags in flood-prone areas and in low school buildings. Staff also checked drainage systems to ensure they were functioning properly.

Schools reported downed limbs and some debris, but none that landed on roofs or damaged buildings. Several schools also reported minor roof or water leaks, but again with minor damage.

“And that’s due to the age of the roof. There wasn’t a lot we could do to prevent that,” he said.

In the meantime, facilities staff are going out to each school, two by two, to assess damage and to look for any needed repairs. So far, they haven’t found much.

Kannapolis City Schools is operating on a regular schedule today. District officials report that all schools have power, and roads in Kannapolis are clear for buses to travel.

District leaders will evaluate the make-up day situation and determine if either of the two days missed during Hurricane Florence will need to be made up by students and staff. Once a decision is made, the district will let students and staff know when or if the days will be made up.

Catawba College re-opened and all classes resumed on a normal operating schedule today. Catawba students who traveled home and are in areas adversely affected by Hurricane Florence are encouraged to use their best judgment about traveling back to campus.

On campus, Frock Athletic Fields and the Catawba Ecological Preserve remain closed due to flooding.