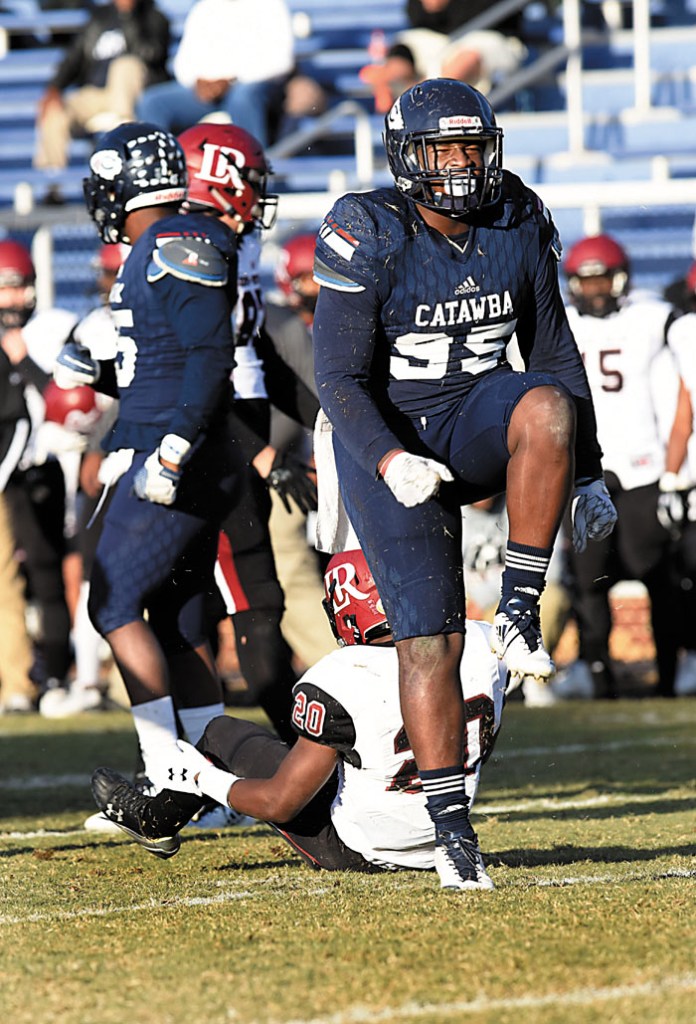 SALISBURY — Kyle Kitchens was a four-year starter and three-time All-American for the Catawba Indians, so you never expect to adequately replace a player like that.

You just try to remember the good times, put someone in his spot, and move on as best you can.

Kitchens carved out his well-earned national reputation as a devastating linebacker, but with Catawba’s football team completing a transition to a 4-2-5 defense last season, Kitchens made a shift to defensive end and continued to excel.

Cameron Davis, a junior defensive end who has been a role player the last two seasons, obviously has taken a jump forward this year, not just physically, but in terms of confidence.

Maybe Davis is the new Kitchens. He’s played like an All-American so far, producing an eye-popping interception in the opener at West Georgia and following it up with a South Atlantic Conference Player of the Week effort at Winston-Salem State in the Indians’ second game. Against the Rams, under the lights at Bowman Gray Stadium, he was in on 11 tackles and had 2.5 sacks. That’s crazy stuff for a defensive linemen, but he was stuffing running plays and chasing quarterbacks with equal proficiency.

“The whole preseason, the big question mark was who was going to replace Kyle Kitchens,” Catawba head coach Curtis Walker said. “Honestly, we weren’t sure. But in our first two games, Cameron Davis has been very reminiscent of  Kitchens. He’s answered a lot of the questions.”

Like a lot of D-II players, Davis is as athletic as his D-I counterparts, but he lacks inches. His 260 pounds are packed on a 5-foot-11 frame. He can run. He was a tight end/linebacker for a strong program at Coffee High in southern Georgia, the same school that produced explosive Kansas City Chiefs receiver/returner Tyreek Hill. He’s swift enough that Catawba will ask him to drop back in pass coverage in certain situations.

“I played high school ball a long way from North Carolina, only about 30 minutes from Florida, but one day the big man himself (Walker) called and offered me a full ride on the phone,” Davis said. “I said, ‘Say no more. I’m your guy.'”

Catawba coaches debated whether Davis would fit best on offense or defense.

“Cameron was really kind of a late recruit, late summer — we were just lucky,” Walker said. “We were looking for a tight end or a defensive linemen, and he was very good at both positions. Being a defensive guy myself, I wanted him more for the defensive side of the ball, and that’s where he ended up.”

More was expected this season as he moved into a full-time starting role for the first time. He has delivered.

“I’ve just been trying to do my job, not trying to do too much, but I did play with a little bit of anger at Winston-Salem State,” Davis said. “I was upset about the loss at West Georgia. I felt like the defense needed a spark and I tried to give it to us.”

He did that. He was recognized as the “Catawba Chief,” the player of the game for the Indians, as well as SAC Defensive Player of the Week.

No one was more disappointed than Davis that Catawba didn’t get to play its scheduled home game with UNC Pembroke last week because of Hurricane Florence.

Maybe that will make him play “a little angry” again when Catawba (1-1) goes to Mars Hill (0-3, 0-1) this Saturday to start SAC play with a 1 p.m. contest. Maybe he’ll spend another 60 minutes reminding people of Kitchens.

“Kyle is still helping us with a lot of advice,” Davis said. “He really wants us all to succeed.”

Catawba’s unplanned week off probably was good for receiver Will Sweeper who got banged up some at Winston-Salem State. He had two big TD catches against the Rams. He’s an explosive pass-catcher with sprinter’s speed and might prove a worthy successor to Sam Mobley. … DB Trey Murray and punter Caleb Berry had big games against Winston-Salem State. Murray was instrumental in Catawba creating four turnovers. Berry said it was his best game as an Indian. He averaged 45 yards per punt, as Catawba won the special teams battle handily.