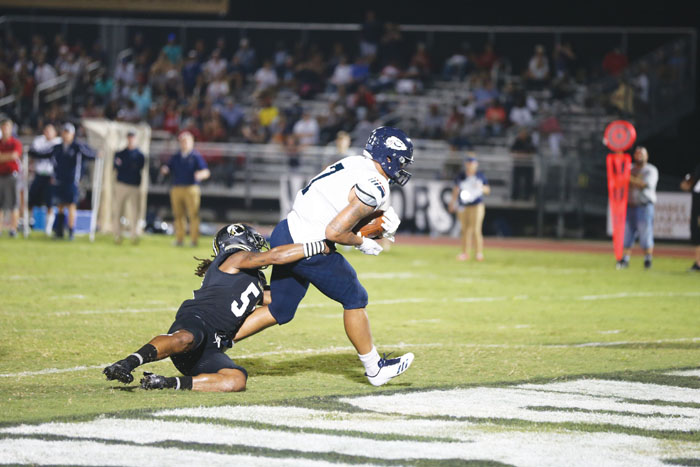 Willis Glassgow file photo/UNCP photo ... Catawba tight end Jourdan Osinskie, right, shown during a game from last year, will be happy to play at Mars Hill on Saturday. The Indians’ scheduled home game against UNCP last Saturday was canceled due to Hurricane Florence.

Only 65 will make the road trip to Mars Hill on Saturday, but they all matter. They all contribute, with many younger players serving on a unit known as the developmental or “scout” team. They’ll be running Mars Hill’s offensive plays and simulating Mars Hill’s defense in practice, helping standouts such as linebacker L.J. Melvin, defensive end Cameron Davis and tight end Jourdan Osinskie prepare for the Lions.

Due to concerns about Hurricane Florence, Catawba didn’t get to play last Saturday’s scheduled game with UNC Pembroke, so Catawba’s players of the week were guys from the developmental team. True freshman linebacker Zach Bond, sophomore receiver Roman White and true freshman tight end Deland Thomas aren’t on the depth chart yet, but they represented the Indians at Tuesday’s press conference.

“They are guys who are building and growing individually and they’re really helping our team out by giving us a look at what our next opponent is going to do,” Walker said. “It’s good to get those guys in the limelight a little bit because they’re unsung. We believe these guys have a future.”

White, who was an outstanding track and field sprinter and jumper at Cuthbertson High in Waxhaw, is one of the more explosive athletes in Catawba’s program. It will be his job in practice this week to mimic Mars Hill’s outstanding receiver Craig Rucker, who has 28 receptions for 343 yards and three touchdowns in the Lions’ first three games. It’s a rare luxury for the Indians to have a developmental player who can imitate Rucker’s wheels.

White was headed to college to focus strictly on academics when Catawba made him an offer. A business administration major with a concentration in accounting, now he’s decided to take football as far as he can. He could be a factor for the Indians next season.

Playing for a 2A private school, Bond was regional defensive player of the year in Bluffton, S.C. He’s 6-foot-1, 200 pounds, which sounds undersized for linebacker, but that’s the type of athlete Catawba is looking for to man its 4-2-5 defense. Catawba’s starting linebacker Melvin (5-11, 200) and Eric Gibson (5-11, 195) aren’t bigger than Bond, although they’re more experienced and probably a bit quicker. Bond will be blitzing a lot in practice this week, imitating the packages that Mars Hill uses and giving Catawba’s offensive linemen a chance to see where a Mars Hill blitz will be coming from.

“I try to give it everything I’ve got on the scout team,” Bond said. “It makes me better, and it makes our team better.”

The sturdy Thomas (6-4, 215) looks like a tight end is supposed to look. He was a good enough athlete to dominate at Rosman High, a 1A school in the mountains, overcoming injuries to put up 14 touchdowns and 10 sacks as a two-way player as a senior. He also may impact Catawba’s basketball program. He averaged 24.6 points per game his last two seasons for the Rosman Tigers and scored 1,688 career points.

Thomas is still learning as a blocker, but he’s already a proficient pass-catcher. Mars Hill has become a passing team, so Thomas will perform his best impression of  Mars Hill freshmen tight ends Ty Snelson and Kendall Johnson in practice this week. They have combined for seven catches so far.

Thomas knows quite a few of the Mars Hill players. The Lions recruit the N.C. mountains a lot more than the Indians do.

Catawba coaches and players found out last Tuesday afternoon that the UNC Pembroke game had been canceled. That gave the Indians a lot of time between games and provided an unexpected opportunity for a “Devo Bowl,” in which the scout team players were able to perform in a live scrimmage against each other. They had a chance to show coaches what they can do.

Brandon Stewart, a freshman quarterback from Maryland, and Jackson Bryant, a cornerback from Greenville, S.C., were stars in the Devo Bowl.

“There were some big hits out there, some of the biggest of the season,” Walker said. “A lot of those guys are really progressing.”

Catawba closed down last Thursday and Friday due to Florence and was still shuttered Monday.

That gave worried players a chance to return home and be with their families. Widespread disaster was feared across the Carolinas.

One of the most concerned players was Bond, whose family lives on Hilton Head Island on the South Carolina coast. The island is only 10 feet above sea level. He left after Wednesday’s practice, traveling on Interstate 85 and then taking back roads until he reached I-95.

“I’m a fourth-generation guy on the island — our family was there before they started calling it Hilton Head Island,” Bond said. “The last two big hurricanes (Matthew in 2016 and Irma last year) caused a lot of flooding in Hilton Head, a lot of damage, power outages and evacuations, and I was afraid that Florence was just going to blow the island away. But it turned out it wasn’t nearly a big a deal for Hilton Head as Matthew had been. There was a lot of wind, some trees down, but nothing really bad. I came back to Catawba on Monday feeling a lot better about things.”

White’s home in Waxhaw is just above the South Carolina line and was drenched by heavy rainfall as Florence plodded westward from the coast.

“My mom was really worried about me, calling, wondering why I wasn’t there yet, but I made it home on Thursday,” White said. “We were fortunate to be at a little higher elevation than some others in our area when the creeks rose and flooded a lot of  places around our home. I helped out where I could, helped clean up our yard, but it wasn’t as bad as I thought it might be.”

Living in the mountains, south of Asheville, Thomas heard reports about potential landslides and mudslides from Florence. There was plenty of rain and wind, but his hometown escaped any major drama.

So, apparently, did all the Indians. Catawba doesn’t have as many players from eastern North Carolina, the area hardest hit by Florence, as it once did. The Indians have had their share of stars from Fayetteville, Wilmington and New Bern over the years. Right now, Melvin, who hails from Fayetteville, is a  notable exception.

Catawba was fortunate. Florence was catastrophic in many areas. Flooding continued Tuesday. There were still hundreds of thousands of citizens without power. The death toll rose into the 20s in North Carolina alone.

“We’re feeling very blessed right now,” Walker said. “Our players that traveled home made it safely and they came back to us safely. I’m not aware of any issues with our players or with our players’ families from the hurricane.”

Walker said that some Catawba players stayed on campus last week and over the weekend, continuing to use the weight room. He said about two-thirds of team was back by Monday, and most of the Indians worked out in the gym.

“With school closed, nothing was mandatory, but a lot of guys did attend on a voluntary basis,” Walker said. “It was almost a standard Monday practice.”

Catawba’s football practice field was flooded by Florence, along with the soccer and softball field, but the team was able to practice in close to normal conditions  on Tuesday at Shuford Stadium.

“Our game field is the driest field that we have on campus right now,” Walker said. “We hate that we didn’t get to play the UNC Pembroke game, but we’re getting back to our routine now, getting back to normal, and preparing to get our South Atlantic Conference season started at Mars Hill on Saturday. We’re thankful and we’re excited.”

Harris has 3 TDs in first start as Duke…