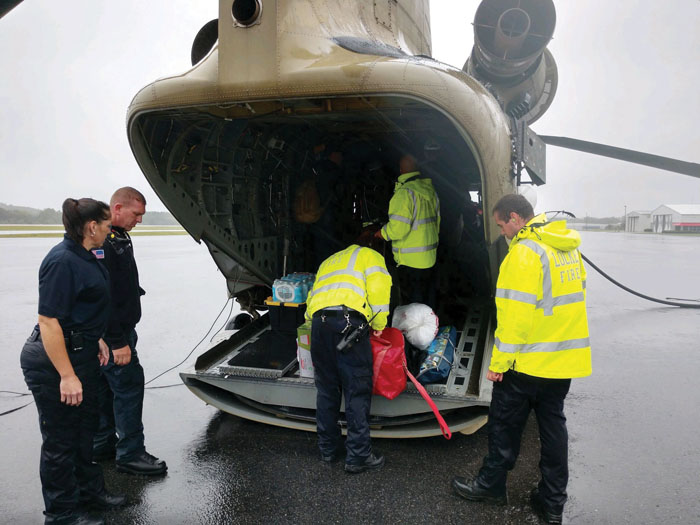 Locke Fire Department sent four firefighters to assist the Leeland Fire Department in Brunswick County where roads into to town remain under flood waters. Firefighters were taken to the area via this National Guard helicopter. Submitted photo

Area firefighters have deployed in other parts of the state to help assist fire departments in towns ravaged by Hurricane Florence and subsequent flood waters. Three local fire departments sent 10 personnel, some of whom had to be flown into flooded areas.

Locke Fire Chief Rusty Alexander said his department sent four people after receiving a call on Sunday around 9 a.m. from the Office of State Fire Marshal who asked for personnel to be deployed to the Leeland Fire Department in Brunswick County.

The four firefighters flew out of the Concord-Padgett Regional Airport on Sunday around 2 p.m. because the only way to get into the flooded area was by helicopter, Alexander said.

In addition to the Locke fire personnel, he said, Shelby, Concord and Sawmills fire departments all sent personnel to Brunswick County.

The helicopter, a CH-64 Chinook, was provided by the National Guard. Locke fire personnel are expected to stay until Friday.

“They will let me know if I need to send replacements,” Alexander said.

The firefighters are expected to work around the clock with few breaks in any capacity needed including responding to fires, wrecks and routine emergencies as well as help with further Hurricane Florence response.

Alexander said it’s most likely the firefighters will work some 72 to 96 hours and get sleep when they can in order to relieve the firemen there.

The firefighters took with them at least three days worth of water and non-perishable food as well as their turnout gear, air packs and bedding to sleep on, Alexander said.

He said the creeks and streams are pretty much overrun just like some in Rowan County. He added that there weren’t too many impassable roads between Rowan and Cumberland County.

“We will be covering for the department around the area. Their guys are tired,” Shinn said.

His department also brought their own supplies.