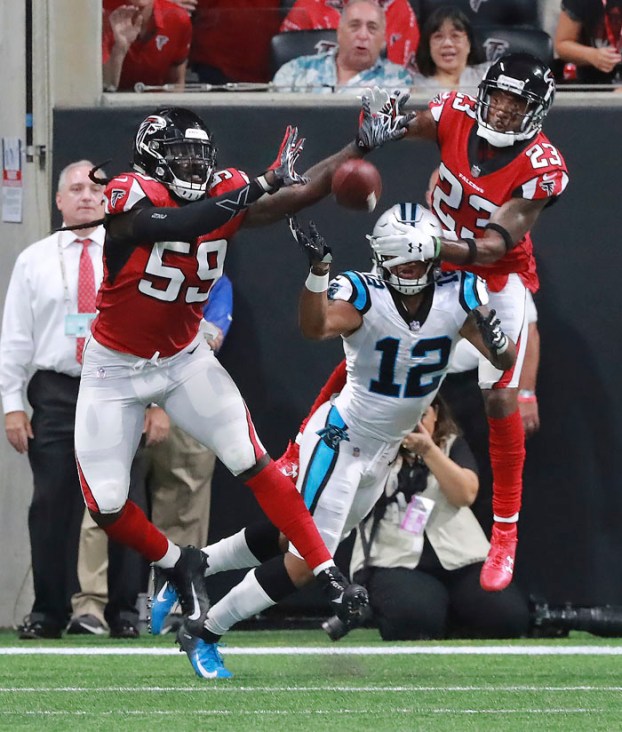 Atlanta Falcons defenders De'Vondre Campbell, left, and Robert Alford break up the final pass of the game to Carolina Panthers D.J. Moore during the fourth quarter of an NFL football game on Sunday, Sept 16, 2018, in Atlanta. (Curtis Compton/Atlanta Journal-Constitution via AP)

Panthers’ Moore has a day to remember — both good and bad

ATLANTA (AP) — D.J. Moore had a day to remember.
Both good and bad.
Carolina’s first-round pick had the first catch — and touchdown — of his fledgling NFL career when he hauled in a 51-yard scoring pass from Cam Newton with just over 2 minutes remaining Sunday against the Atlanta Falcons.
But, with a chance to send the game to overtime, Moore couldn’t hang on.
Newton’s final heave into the end zone slipped through the rookie’s hands, allowing the home team to escape with a 31-24 victory over the Panthers.
“Real frustrating,” Moore said. “At the end of the day, you want to make that play every time.”
Trying to come back from a pair of 14-point deficits in the second half, the Panthers had a chance after Atlanta punted the ball away with 1:48 remaining. Starting at its own 16, Carolina drove into Falcons territory and had one last chance from the 31 with 5 seconds remaining.
Newton threw one up from Moore in the left side of the end zone. The receiver managed to box out cornerback Robert Alford, though linebacker De’Vondre Campbell was still lurking next to him.
Campbell somehow failed to knock down the ball, giving Moore a chance.
But the rookie let it slip through from his grasp, ending the game.
“It was up there for us and I just knew the linebacker was in front of us,” Moore said. “He kind of dropped it, so I had to go up underneath him. I just tried to reel it in.”
No such luck.
“I had a good shot at it,” Moore said, “but it just came down too fast through his arms as I reacted.”
Newton was hit as he threw by Grady Jarrett, but managed to put the ball in the right spot.
“I was just trying to give somebody the opportunity to make a play,” the quarterback said. “From what I did see before I got hit, that was as close to a one-on-one as anybody had. I was just trying to give him a chance.”
A few minutes earlier, the youngster was celebrating his first NFL catch.
It was certainly one to remember.
Moore made the grab at the Atlanta 34, put a move on safety Jordan Richards, shook off an attempted tackle by linebacker Duke Riley and sped between two more defenders to reach the end zone standing up, cutting the Falcons’ lead to a single touchdown.
“We don’t ever give up, no matter who the opponent is,” Moore said.
Newton turned in a gutsy effort after taking a vicious hit from Falcons safety Damontae Kazee early in the second quarter .
Showing off his running ability, Newton scampered for a 10-yard gain on fourth-and-4 at the Atlanta 33.
Knowing he had plenty of yards to extend the drive, the quarterback went into a slide. Kazee launched into Newton’s head, delivering a helmet-to-helmet hit that left the Panthers star sprawled on the turf while skirmishes broke out all over the field.
Receiver Torrey Smith delivered a retaliatory shot to Kazee, sending him to the turf and also drawing a personal foul. Falcons safety Ricardo Allen jumped on top of his teammate, protecting him from any further blows.
Kazee was ejected from the game, but Carolina didn’t pick up any extra yards because of the offsetting penalties.
“That probably isn’t the most mature answer, but in the heat of the moment, I’m going to stand up for any of my guys,” Smith said.
Newton let out an emphatic scream as he left the field for quick check in the medical tent. He wasn’t seriously hurt and was able to return to the field for the next play after the officials sorted out the penalties.
Six plays later, the Panthers scored on Newton’s 5-yard touchdown pass to Jarius Wright for a 10-3 lead.
Newton, who has endured his share of tough hits over the years, didn’t seem too upset by Kazee’s cheap shot after the game.
“It looked worse than it was,” he said “I’m just lucky that nothing pretty much happened. This game isn’t fit for cheap shots like that, but at the end of the day you can’t blame him. He’s playing as hard as he can, I’m playing as hard as I can. That’s what this football game brings.”