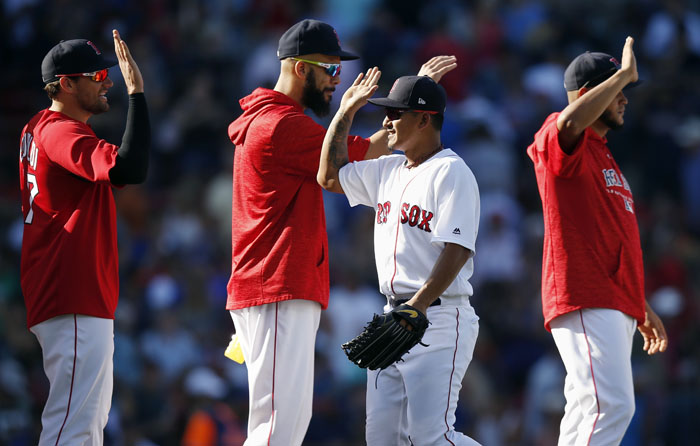 BOSTON (AP) — Red Sox right fielder Mookie Betts left the game after hurting his left side making a throw to home plate during a 4-3 win over the New York Mets on Sunday that cut Boston’s magic number to two for a third straight AL East title.
Boston can clinch the division at Yankee Stadium for the second time in three seasons, needing only one win during a three-game series that opens Tuesday afternoon.
Betts said the injury is minor and he will be in the lineup Tuesday. He is hitting .337 with 29 homers and 72 RBIs.
Andrew Benintendi hit a tiebreaking sacrifice fly in the eighth inning off Seth Lugo (3-4) after a matchup of Boston’s Chris Sale and New York’s Jacob deGrom, both Cy Young Award candidates. Brandon Workman (5-0) pitched a scoreless eighth, and Steven Wright got three outs for his first big league save.

BLUE JAYS 3, YANKEES 2
NEW YORK (AP) — Dellin Betances wasted a 2-1 eighth-inning lead, allowing hits to four of his first five batters. Pinch-hitter Rowdy Tellez had a tying single and Randal Grichuk a go-ahead double. Betances (4-6) has lost in two of his past three appearances.
The Yankees maintained a 1½-game lead over Oakland for the top AL wild card. Manager Aaron Boone said All-Star slugger Aaron Judge could return to the lineup against Boston.
Andrew McCutchen hit his fourth homer with the Yankees on the second pitch from Thomas Pannone (3-1). Toronto closer Ken Giles struck out Gary Sanchez with a runner on to end his second save in two days.

CARDINALS 5, DODGERS 0
ST. LOUIS (AP) — Adam Wainwright pitched two-hit ball over six innings for his first win in five months, Marcell Ozuna homered and St. Louis salvaged the finale of a four-game series with Los Angeles.
The Cardinals snapped a season-high four-game losing streak and moved into a tie for the second National League wild card with the Dodgers, who slipped a half-game behind Colorado for the NL West lead.
The Rockies visit Dodger Stadium for a three-game series beginning Monday night, the last regular-season meeting between the teams.
Wainwright (2-3), making his second start since missing almost four months with right elbow inflammation, struck out a season-high nine while earning his first victory since April 16.
Ozuna had three hits and Yadier Molina drove in two runs.
Cardinals reliever Bud Norris left the game with a blister on his middle finger in the seventh. Jordan Hicks and Carlos Martinez completed the four-hit shutout — one night after the Dodgers piled up 17 runs.
Ross Stripling (8-4) started strong but lasted only 3 1/3 innings.

ASTROS 5, DIAMONDBACKS 4
HOUSTON (AP) — Justin Verlander (16-9) struck out 11 in seven innings, allowing one run and three hits for Houston, which leads second-place Oakland by 4½ games in the AL West.
Arizona is 4½ games behind in the NL West and four games back for the second NL wild card.
Zack Greinke (14-10) allowed four runs and eight hits in 6 1/3 innings.
Tyler White hit a two-out, RBI double in the sixth for a 2-1 lead, Josh Reddick homered leading off the seventh, Jose Altuve had an RBI single later in the inning and Martin Maldonado added a run-scoring single in the eighth.
Eduardo Escobar had a sacrifice fly in the ninth and Daniel Descalso hit a two-run homer off Roberto Osuna, who struck out Ketel Marte for his 18th save.

MARLINS 6, PHILLIES 4
PHILADELPHIA (AP) — Peter O’Brien homered and drove in three runs as Miami ended a five-game losing streak. O’Brien put the Marlins ahead with a two-run homer in the fourth and Bryan Holaday added a pair of doubles.
Nick Pivetta (7-13), who has won only one of his last 11 starts, struck out seven in the first three innings.
Jose Urena (7-12) allowed one run and three hits through a five-inning stint for his third straight win. He left early because of cramping in his pitching hand.

ROCKIES 3, GIANTS 2
SAN FRANCISCO (AP) — Antonio Senzatela pitched shutout ball into the sixth inning and hit a two-run single as Colorado topped San Francisco and moved back into first place in the NL West.
The Rockies, blanked the previous two days, avoided a three-game sweep. They jumped a half-game in front of Los Angeles when the Dodgers lost at St. Louis.
Senzatela (5-6) left in the sixth and Wade Davis got his NL-leading 40th save. The Rockies scored three times in the second against Dereck Rodriguez (6-4).

PADRES 7, RANGERS 3
SAN DIEGO (AP) — Rookie Francisco Mejia hit a grand slam with two outs in the ninth inning and San Diego avoided three-game sweep in a matchup of last-place teams.
It was the first walkoff for Mejia, who was promoted from Triple-A on Sept. 4. The prized prospect has hit three homers since then.
The Rangers were two outs away from a 3-2 win before Freddy Galvis hit a tying double off rookie reliever Jeffrey Springs (0-1). Mejia homered off Springs.
Kirby Yates (5-3) got two outs for the win.

ANGELS 4, MARINERS 3
ANAHEIM, Calif. (AP) — Kole Calhoun hit a tiebreaking home run and Justin Upton connected in his third straight game as Los Angeles averted a four-game sweep.
Angels star Shohei Ohtani appeared to be limping as he jogged off the field in the eighth inning after he slid awkwardly into second base and was caught stealing.
Calhoun’s solo homer in the seventh off reliever Nick Vincent (3-4) snapped his 0-for-25 skid.
Taylor Cole (2-2) got the win and Ty Buttrey struck out the side in the ninth for his third save.

TIGERS 6, INDIANS 4
CLEVELAND (AP) — The Indians rested several regulars a day after clinching the AL Central. Jim Adduci homered and drove in a career-high four runs for Detroit
Francisco Liriano (5-10) allowed three runs in seven innings for the Tigers, who won two of three in the series after losing 10 straight at Progressive Field dating to last season.
Cleveland rookie Shane Bieber (10-4) wasted a 3-1 lead in the fifth.
Indians reliever Andrew Miller pitched a scoreless seventh but gave up a solo home run to Mikie Mahtook in the eighth. Miller has been on the disabled list three times this season with hamstring, knee and shoulder injuries.

ORIOLES 8, WHITE SOX 4
BALTIMORE (AP) — Jonathan Villar and Adam Jones homered and rookie Cedric Mullins had a career-high four hits.
Baltimore took control with a five-run first inning against Lucas Giolito (10-11) and held on for its 43rd victory. That means the Orioles can’t match the major league record of 120 losses in a season, set by the 1962 New York Mets.
Ryan Meisinger (1-0) got the final two outs in the fifth for his first major league victory, and Paul Fry finished for his initial big league save.

TWINS 9, ROYALS 6
KANSAS CITY, Mo. (AP) — Tyler Austin hit one of Minnesota’s four home runs and made a spectacular catch while flipping into the dugout down the first-base line as Minnesota avoided a four-game sweep.
Max Kepler, Johnny Field and Jorge Polanco also went deep for the Twins, who had a season-high 18 hits.
Kyle Gibson (8-13) lasted into the seventh and ended a four-start losing streak despite giving up five runs and 11 hits.
Jerry Vasto (0-1) allowed one run on three hits to take the loss in relief.