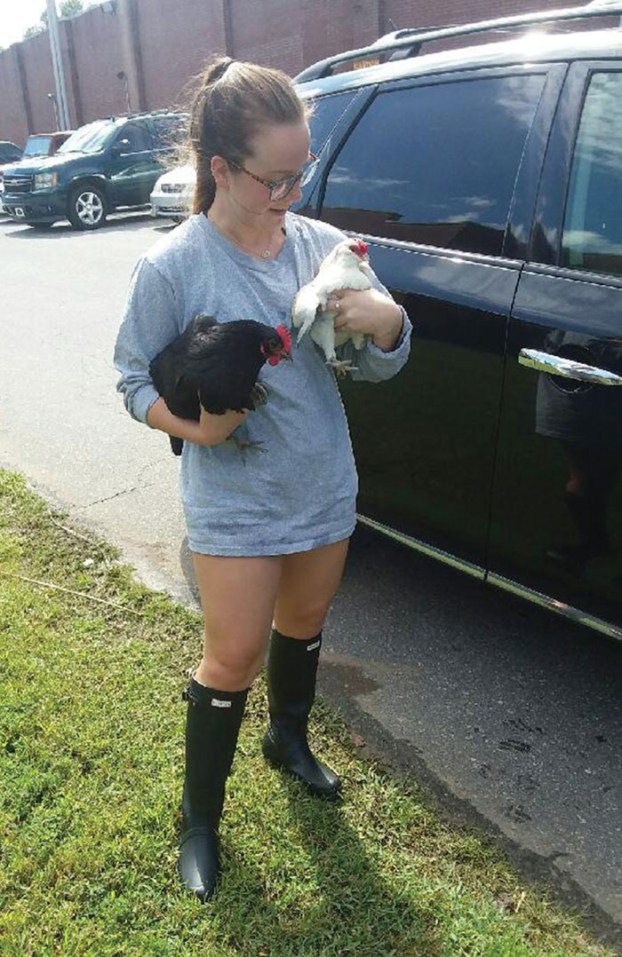 Rebecca Rider/Salisbury Post Jenna Thompson rescued the chicken from the Partners in Learning coop in a flooded yard.

Birds of a feather: Chickens rescued from flood waters

SALISBURY — It was just before 11 a.m. Monday when Jenna Thompson waded into the rising waters of Grant’s Creek on a rescue mission.

Heavy rains from Hurricane Florence caused the creek to spill its banks, flooding over practice fields at Catawba College and edging ever closer to Partners in Learning’s Catawba location. While the center itself was still high and dry, its garden and chicken coop were underwater.

Norma Honeycutt, executive director, sent out a plea for help, asking if any Partners in Learning staff could go recover the day care center’s two chickens, Henny and Little Roo. While the coop was mostly flooded, the birds had climbed up — clinging to the last bit of high ground. Thompson, a volunteer and soon-to-be-employee, responded.

So Thompson donned her tall rain boots and stepped into the muddy water. The water was several feet deep at that point and flooded over the top of her calf-high boots. When she got to the coop, the chickens were damp, bedraggled and clinging to a floating piece of wood.

Still new to Partners in Learning, Thompson said she didn’t know if those were the only two chickens in the coop.

“I was really scared at first,” she said. “I was digging through everything to see if there were more.”

But the black and white pair were the sole occupants, so Thompson scooped them up — one under each arm — and sloshed back to dry land.

“I was glad I could get them both at the same time,” she said.

Staff later confirmed that those were the center’s only chickens. Thompson settled the birds on a towel in her car, letting them enjoy being safe, dry and cooled by the air conditioning. The two chickens will be resettled at Partners in Learning’s Novant location on Best Street, which also has a coop.

According to Honeycutt, the Catawba College location was not damaged by flood waters as of noon Monday.

Cleveland pair charged with stealing car, selling it for scrap

By Shavonne Walker shavonne.walker@salisburypost.com SALISBURY — Rowan authorities say a Cleveland pair stole a vehicle and other items from a... read more