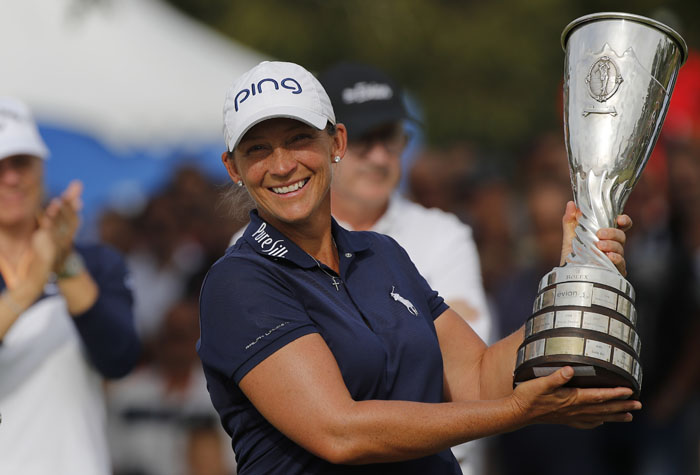 EVIAN-LES-BAINS, France (AP) — In her 18th year on tour, after a wild and tearful final few holes, Angela Stanford became a major tournament champion Sunday.
It was a long journey to an unlikely one-shot victory at the Evian Championship for a player who believed as a rookie in 2001 that major titles would come sooner than her 40th birthday — and probably not in France.
“I would have laughed, ‘No way, it’s going to happen before’,” said Stanford, whose runner-up finish at the 2003 U.S. Women’s Open was the first of 13 top-10s in majors without a win.
“I didn’t know at the time how close I was,” she reflected of that playoff loss 15 years ago. “It was only my third year and I had no idea what I was doing, to be perfectly honest.”
Those feelings returned on the 17th tee at Evian Resort Golf Club, she said, after double bogey at the par-3 16th dropped Stanford out of a tie with long-time leader Amy Olson.
Stanford closed her round of 3-under 68 with eagle-double bogey-birdie then a barely missed birdie that left her in tears minutes before Olson played the 18th and made double-bogey.
Her winning 12-under total of 272 was good by one shot to earn a $577,500 check.
Olson (74) fell into a four-way tie for second place with fellow Americans Austin Ernst (68) and Mo Martin (70), and South Korea’s Sei Young Kim (72). Martin barely missed with a birdie chance on the 18th to face Stanford in a playoff.
Olson missed a six-foot putt for bogey on the 18th to force a playoff. Stanford waited green-side out of sight of the putting surface after signing autographs for young spectators.
Tears flowed again as Stanford watched on a giant screen for Olson — who spent all day as outright or joint leader — to putt.
More than six years after getting the last of her five LPGA Tour titles, the 76th-ranked Stanford, put her hands to her mouth in surprise before beginning an emotional round of television interviews.
The result ensured American women extended a streak of winning at least one major title each year since Evian was added as the fifth in 2013.
Olson, who led by three shots with five holes to play, was stoic about a career-best result that ended by three-putting.
“It’s disappointing to finish like that,” said the 26-year-old Olson, whose previous best finish in an LPGA event was tied for seventh in 2014. “I committed to every shot and did everything I could.”
Playing in the second-last group, Stanford started the day five shots back of Olson who had a two-shot lead over Kim.
The leaderboard changed little on the front nine until Olson made bogey at the par-3 8th. She stayed as joint leader with Kim on 13 under — three shots clear — only when Kim’s putt from off the same green hit the pin and stayed out.
Olson’s two-shot lead was soon restored after Kim’s double bogey 6 at the 10th. She padded her lead to three with a tap-in for birdie at the par-5 13th.
Two more Americans, Stanford and Ernst, joined Kim three behind Olson, who let a good chance slip at the par-5 15th after her short approach chip to the green was weak.
In a wild ride for Stanford, she joined Olson on 13-under after making eagle at the 15th, then gave back both shots when she found thick rough below the par-3 16th green. Soon, Stanford was punching the air with her right fist on sinking a 25-footer for birdie on the 17th.
Olson went to the 17th with a one-shot lead on 13 under as Ernst set a clubhouse target of 11 under. Her bogey-free 68 saw several putts lip out.
Refusing to check the leaderboard all day, Olson said she only knew on the 18th tee where she stood. A par 4 would win, but she hooked her tee shot into the rough, and her third-shot approach was well below the pin. A 40-foot par putt for victory raced past.
On a stellar day for the Americans, 16-year-old amateur Rachel Heck (71) tied for 44th in her second major. Her 2 over total of 286 tied with defending champion Anna Nordqvist.
“I really hope that this is what I’ll be able to do with my life in a few years after college,” said Heck, a Memphis, Tennessee native was is to attend Stanford University. “I can’t wait to be out here full time.”