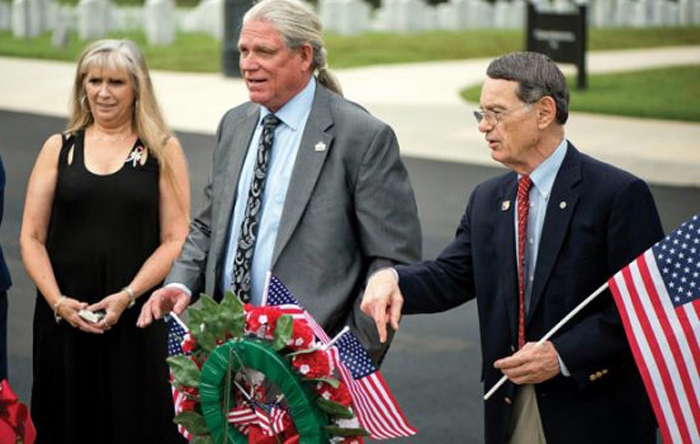 A weekly quiz on local news; answers below

1. Salisbury City Manager Lane Bailey sets aside time every month to see residents one-on-one and hear their concerns. What does Bailey call these personal discussions?
A. In the Right Lane
B. Bailey Briefings
C. Meeting With the Manager
D. Bailey’s Beat

2. John McLaughlin recently retired, but for close to 60 years, his business was a fixture in the West End community of Salisbury. That business is still operating. What is it?
A. A barbershop
B. A pawnshop
C. A jewelry store
D. A grocery

4. Rowan County has received a shipment of something for which it paid about $245,000. The county is now the proud owner of what?
A. Fifty new ballot machines for elections
B. Six new patrol cars for the Sheriff’s Office
C. Ten new paddle boats for Dan Nicholas Park
D. A new, handcrafted water wheel for Kerr Mill at Sloan Park

5. As forecasts related to Hurricane Florence became more ominous, Jill Foster and Bobby “Sev” Sellers decided to move their Saturday wedding to Concordia Lutheran Church in China Grove. Where was it originally supposed to be?
A. Walnut Hill near Barber
B. The Arbors near Cleveland
C. The Shrine Club along High Rock Lake
D. The Henry Connor Bost House off Potneck Road

8. Before they enter her fourth-grade classroom at Hurley Elementary School, students of teacher Spencer Ann Bowden receive what?
A. A special handshake
B. A handwritten, inspirational quote meant especially for each student
C. An apple
D. Mismatched locks and keys. Only when the students work together to figure out which keys fit which locks can they go to lunch.

9. The T-Man 5K, which will be run in Mooresville in coming weeks, is named for Tristen Hobbs, 15, who died in January. The run is trying to raise awareness for the prevention of what?
A. Juvenile diabetes
B. Cerebral palsy
C. Reckless driving among teens
D. Teen suicide

10. Nancy Fezler had a close connection to the terrorist attacks of Sept. 11, 2001. How so?
A. As a customer relations worker for United Airlines, she personally knew the Denver-based crew on Flight 93, which had been overtaken by hijackers before going down in a field near Shanksville, Pennsylvania.
B. As a corporate attorney in New York, she had left the North Tower of the World Trade Center 30 minutes before the first hijacked plane struck.
C. As a captain in the Navy, Fezler was stationed at the Pentagon when one of the hijacked planes hit the wing where her office was located.
D. As a battalion chief with New York City Fire Department, Fezler worked 36 hours without sleep after the Twin Towers fell.