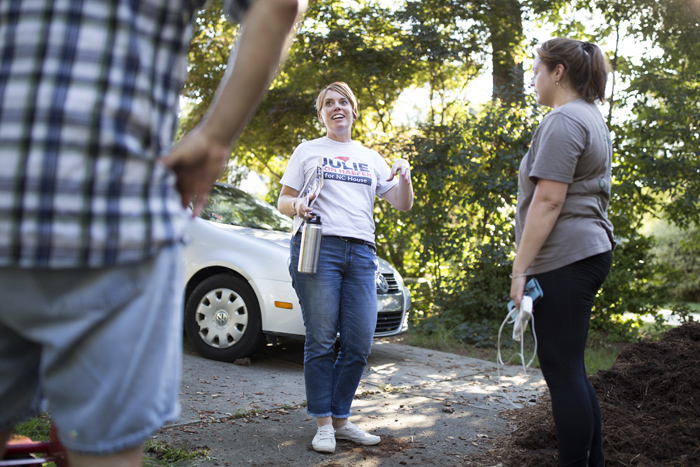 APEX — The owner of a small vodka distillery near this traditionally Republican enclave in suburban Raleigh says he is so fed up with GOP leadership in the state capital that he took leave from his job to try to defeat a state senator.

A popular local weatherman in the state’s Appalachian Mountains with no experience in politics threw himself into a race to unseat a four-term GOP member of the state House.

And the daughter of a legendary former governor is taking her first crack at a run for office by challenging a Charlotte area state House Republican with a promise to renew the legacy of her father, Jim Hunt, as a champion for education.

An unusual political battle is raging across North Carolina, where national and state Democrats have recruited an army of candidates and are pouring millions of dollars into a campaign to loosen a years-long Republican grip on a state legislature that has turned an otherwise evenly split state into a bastion for some of the country’s most conservative laws.

Among them: a limit on transgender access to restrooms that was ultimately repealed under pressure from business leaders; congressional district maps that courts have ruled were designed to curtail the voting power of African-Americans; and education spending levels that have sparked mass protests at the state Capitol.

“North Carolina has been a beacon in the South, and I had to try and stop this Republican leadership from tarnishing our brand,” said the leader of the campaign, Democratic Gov. Roy Cooper, who has seen the GOP’s legislative supermajority override his vetoes 20 times since he narrowly ousted a Republican incumbent two years ago.

The campaign reflects an often-overlooked subplot of the Democratic Party’s broader push to engineer a “blue wave” across the country in the November midterms — tapping into voter anger at President Trump as well as Republican policies on school funding, taxes and health care to chip away at GOP dominance in state capitals.

“Go! Go! Go knock!” Arun Dhar exclaimed at his door on a recent weekday evening in Apex, shooing away Sam Searcy, distillery owner-turned-Senate-candidate, because Dhar and his wife, Sandosh, are certain Democratic votes. “You have my vote, you can rest assured of that. A lot of knocking is needed!”

The Dhars are from Kashmir, retired pharmaceutical executives who moved to the Raleigh area 13 years ago, bringing with them moderate politics and high expectations for government to fund public schools.

“It’s a terrible thing,” Dhar said of the partisan imbalance in the state legislature. “It is a long fight. Let’s hope. Let’s hope.”

The Democratic Legislative Campaign Committee is pouring $35 million into state legislative races across the country, twice as much as in 2016, with hopes of flipping 15 chambers nationwide, according to a spokeswoman.

The Republican counterpart expects to spend even more — more than $45 million, according to a spokesman. But the financial field within the state is far more level this year than the GOP spending advantage of the recent past. And Republican candidates must contend with Trump’s unpopularity among Democrats as well as unaffiliated voters, whose numbers have been growing dramatically in recent years.

Democrats hold just 45 of 120 seats in the North Carolina House and just 15 of 50 seats in the Senate. While they face steep odds in their quest to win the legislature outright, some Republicans here have begun to acknowledge their party appears increasingly likely to lose the veto-proof supermajorities that have been key to much of their success in thwarting Cooper. For that, Democrats must pick up just four seats in the House and six seats in the Senate.

“If you’re a Republican and you’re not nervous, you should be,” said Carter Wrenn, a longtime GOP operative in the state who made his name working for the late Sen. Jesse Helms.

Even Art Pope, the wealthy GOP donor and former lawmaker who helped choreograph the Republican takeover in the state in 2010, conceded in a recent interview: “At this point in time, it looks favorable to the Democrats.”

Democrats sense a potential voter backlash over what they call Republican overreach on a range of issues — from the bathroom bill and gerrymandering to a new push by GOP lawmakers to block the governor’s power to appoint judges, the state elections board and other executive-branch panels.

Democrats have recruited candidates to run in all 170 legislative districts for the first time that anyone can remember, with the party’s Break the Majority political committee hiring 70 full-time field organizers and banking nearly $6 million — enough to put its spending on par with state Republicans for the first time in a decade.

Indivisible, the grassroots organization that formed after Trump’s election, has launched a “Flip NC” campaign targeting 20 seats in the House and 10 in the Senate. Former President Barack Obama has backed four state House candidates with more endorsements expected this fall, and former Attorney General Eric Holder’s group, the National Democratic Redistricting Committee, has contributed $250,000 to the effort.

NextGen America, the organization of liberal funder Tom Steyer that focuses on registering young voters, expects to spend $1 million in the state by Election Day.

Some state-level Republicans have been invoking rhetoric in recent weeks that suggests a keen awareness of the challenges ahead this fall.

In the Charlotte area, incumbent Republican state Sen. Jeff Tarte is running a TV spot in which a Democratic colleague talks up Tarte’s history of working across party lines. “I served with Jeff, and together we worked together to improve public education for all our children,” Sen. Joel Ford says to the camera.

State Rep. Nelson Dollar, a Republican budget writer and redistricting chairman who has been an architect of some of the party’s policy priorities, touts his role in boosting teacher pay. In an interview with The Washington Post, Dollar also said he would vote to let North Carolina expand Medicaid under the Affordable Care Act — something he has opposed since Republicans took over in 2010.

Dollar, 57, who lives in Cary, a suburb of Raleigh, is facing a challenge from a high-profile opponent, Julie von Haefen, a Democrat and past president of the Wake County PTA. Von Haefen has led the charge against the legislature for what she describes as inadequate public-school funding and an unfunded mandate, since adjusted, to reduce class size that prompted local rebellions across the state.

“That law threw all the schools in Wake County into what we call class size chaos,” said von Haefen, 47. “It was going to require many school districts to fire our art, music, PE and other special teachers. And it would have required Wake County to build 15 schools in one year, which is absolutely impossible.”

Dollar takes credit for brokering a compromise on class size, but von Haefen likes to point out he was also responsible for the original law.

Republican leaders, meanwhile, seem less concerned about moderating their message. Some Republicans here, particularly those competing in competitive races, privately cringed earlier this year when their party’s top two legislative leaders mocked Cooper’s political weakness while speaking to reporters in May about their proposed ballot amendments to undercut his appointment powers.

Asked about further plans to curtail more of the governor’s power, Senate leader Phil Berger quipped, “Does he still have any?” House Speaker Tim Moore added: “If you have any suggestions, let us know.”

Moore’s office did not respond to an inquiry from the Post. Through staff, Berger declined requests for an interview.

For Democrats to succeed this year, they will need voters like Marla Sloane, 60, a registered Republican who runs an internet business selling novelty items from her home. Sloane showed up last week at a meet-and-greet for Searcy, the Democrat running for Senate.

“I don’t hear any state Republicans saying, ‘We’re standing up against ‘Trump,'” said Sloane, who voted for GOP presidential nominees John McCain in 2008 and Mitt Romney in 2012 but could not get herself to vote for Trump. “I think this is a very scary time in America where we’re trying to make sense out of crazy. And I don’t see anyone standing up at the state level saying, ‘This isn’t right.'”

Searcy’s opponent, incumbent Republican Tamara Barringer, won her seat two years ago by just 1,042 votes, and she campaigned, in part, at odds with her own party — on a promise to repeal the bathroom bill, which she had voted for earlier that year.

Barringer, seeking her fourth term, said she has always run in competitive races and has always been willing to buck her own party to represent a district that is roughly evenly split among Democrats, Republicans and unaffiliated voters. She said she changed her mind about the bathroom bill because “I was wrong. If I don’t get it right, I will do my darndest to go back and fix it.”

Searcy, 41, has been canvassing neighborhoods here nearly every night and, despite the area’s traditionally Republican bent, he has been unabashedly introducing himself to potential swing voters as a “Democrat running for state Senate.” As he greets voters, he promises to boost school and health care funding and put an end to partisan redistricting — and he tries to brand Barringer as part of her overreaching party.

“Voters in this district are pretty upset about steps this legislature has taken,” Searcy said in an interview. “This really is the GOP.”