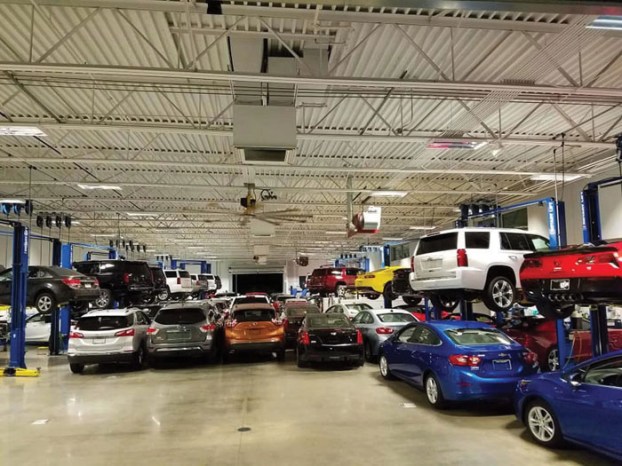 PHOTO SUBMITTED / SALISBURY POST Team Chevrolet recently open a sister Chevrolet dealership in the North Carolina coastal town of Swansboro between Jacksonville and Morehead City. Owners and employees decided to make every effort to minimize damage to their new dealership. With help from local volunteers, including several off duty US Marines, employees filled sandbags, cleaned storm drains, and moved hundreds of new automobiles into the showroom, and shops on the campus before fleeing the area in accordance to mandatory evacuations. Several of the employees that left the area are currently working out of the Salisbury location as they wait for the approaching Hurricane Florence to hit. . SWANSBORO, NC. (9/13/18) 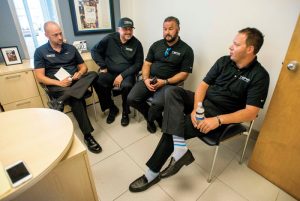 Dillard began contacting dealerships for advice of how to prep for a devastating hurricane, got in her car and drove five hours to the coast to help her team that she calls family.

Moving more than 225 vehicles inside with an inch apart from each other, making sandbags and picking up pine straws to clear the drains, the team worked all day.

“When they called mandatory evacuation at 11 o’clock and we were still there at 4 o’clock with people who were just volunteering to stay and help us get ready,” Dillard said. “We still had sandbags and computers. We had to wrap up all the computers and put them upstairs in trash bags. They were all there helping to stay. A couple of us were out there raking pine straw to get it away from the grates. It was a long day. It was amazing that they all stayed, even after that evacuation. Micah and Tara walked around and said, ‘You can leave, you can leave,’ and they said, ‘No, we’ll stay until we’re done.’ It was pretty amazing.”

“They went out of their way to secure the facility first and put their teammates first and then after the site was secure they went and took care of their personal homes, which is very admirable,” Gandy said. “They care that much about the families that we support through that storm. That’s not something that they will say about themselves.”

Gandy splits his time in Salisbury and Swansboro. He had not received an update on the state of his Swanboro home as of Saturday.

Anthony Gardner, the fixed ops director, just moved from Indiana to Swansboro with his family. He joked on Thursday, saying “I’m getting adjusted to the hurricane life pretty quickly.” While helping prepare the store for the hurricane, his family had to pack up their life to evacuate to Salisbury.

“It was a juggling act,” Gardner said. “Primarily my family lives down there. Micah’s family lives up here. Tony’s bachelor living down there. It was a juggling match. When you’re that close to the storm or the coast if you will, there’s very little you can do when you’re that close. You know it’s going to hit. Luckily my wife was really good taking care of a lot of stuff at home, so I could be at the dealership a lot of time.”

By Saturday, Gardner and his family had lost their home after a tree fell on it, causing the roof to leak and flood the house, destroying it.

Tony Rios, the lead sales operation, wears a bracelet saying “I am second” with the rest of the team.

“Our teams are our family,” Rios said. “It helps when we pull together that way. We’re fortunate to have that work environment where everyone feels that we’re a family. It’s not just punching a clock with these guys. They’ll do whatever we need and they understand big picture stuff.”

Rios has been through hurricanes in south Florida and was in Jacksonville, N.C., for Floyd. He currently lives by the coast in Swansboro. Hurricane Florence washed away his home.

As for the condition dealership, Dillard said she has heard little. They lost power late Thursday night, but a passerby informed her dealership was OK. She said she is nervous about more flooding to come as rain water from the inland begins flowing to the coast.

She said three people with Team Chevrolet had lost their homes, but no one has been hurt.

“We’re just going to keep praying for our team and their safety and the first responders too,” Dillard said.

Dillard said she plans on accessing the damage on Monday as long as they can get to the dealership. They have allowed the Red Cross to use the now-empty parking lot to pass out food and supplies. They also will inspect cars for damage with an emergency response team from their insurance company.

“One of our mantras is to lead with love and they’ve certainly done an amazing job of leading with love,” Dillard said.

SALISBURY — A 23-year-old man is being treated at Carolinas Medical Center in Charlotte after being shot in the head... read more