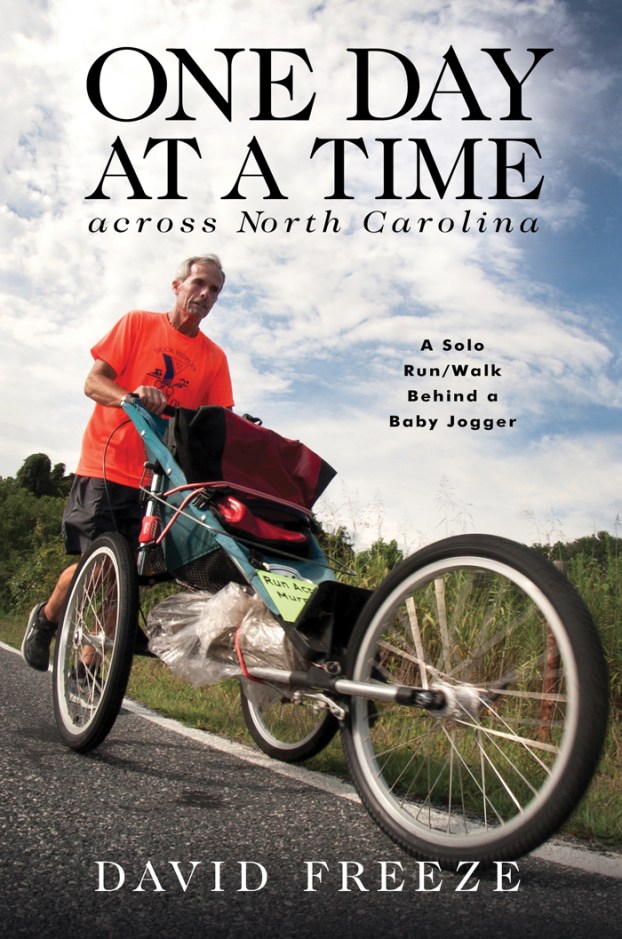 “One Day at a Time Across North Carolina,” by David Freeze.

I must admit, I have been looking forward to getting this book into my hands since David Freeze spoke to my father, Ed Dupree, last September about doing the run across North Carolina.

I could not wait to open the book and get started. My father was a dedicated runner who pursued his goals with record-setting fervor. All in all, he ran 24 years and 82 days without missing a day. He knew how to set goals and develop a plan to achieve them. No goal was too difficult to pursue.

Running across North Carolina was one goal my father was never able to achieve. When he realized his health prognosis looked poor and he might not have long to live, Dad asked David to try to complete the run across North Carolina. He was the perfect person to do it, according to my father. David’s journey was an emotional and spiritual one guided by Ed’s hand on his shoulder every step of the way.

David’s journey of over 600 miles takes you along U.S. 64, starting in the beautiful mountains 20 miles west of Murphy and concluding by the peaceful sea of the Outer Banks in Nags Head.

David tackles sore legs and fatigue to travel to towns across our beautiful state to tell his story. His dedication to completing the journey was a testament to a promise he made to an avid runner and close friend.

There are several stories along the journey that bring humor and show you the concern the people of North Carolina had for David along the way. On a long and cold stretch from Wilson to Raleigh, at least a dozen people stopped to check on David. Some even came by to check more than once.

Another humorous moment I enjoyed in the book was a double-vehicle police stop in Raleigh. David has several “check-ins” from law enforcement officers throughout his journey. This particular stop, one police car slid to a stop in front of David and another stopped behind him. One officer got out of his car with his hand on his weapon and says, “Sir, what are you doing?”

David heard this several times in different ways on the trip. Some people were concerned for his safety and some contacted law enforcement concerned that he was pushing a baby stroller on a major highway.

One of the most meaningful parts of the book for me was the very last day of the journey. David tackled an amazing 43 miles on that day. He was so exhausted that he wanted to walk. But something deep within willed him to finish and for his legs to keep running.

He felt Ed’s hand on his shoulder giving him the extra momentum to climb the final two bridges. This sudden surge of power from beyond brought out such an emotional response from David, he began to pump his fists and look up to the sky, then tears began to stream down his face.

“One Day at a Time Across North Carolina” takes you on an incredible trip on foot through the rural back roads and small towns of North Carolina. You meet some of North Carolina’s most interesting residents — great people with big hearts and helpful intentions. Throughout the book, David braves the elements on his journey to Nags Head — rain, cold, sleet, snow and wind.

Most of us have never dreamed of running across the state of North Carolina but this book immerses you in the journey, just as if you were running those miles right along with both David and my dad.

This book fulfills my dad’s dream of running across the state of North Carolina. Even if you aren’t a runner, you will instantly be inspired as soon as you begin this book. You may even make plans to start your new adventure or goal.

I highly recommend “One Day at a Time Across North Carolina” to help inspire and motivate you to take the time to “run your own race.” This can apply to many facets of your life.

By Susan Shinn Turner For the Salisbury Post ENOCHVILLE — Bubba and Megan McLaughlin are finally living happily ever after.... read more