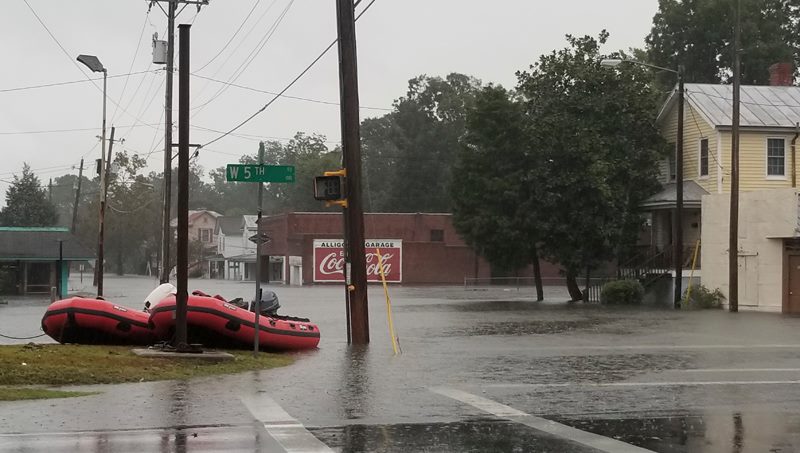 Crews made dozens of water rescues in Washington, NC, on Friday.

We had the television on more than usual in the newsroom last week as we followed the progress of Hurricane Florence.

Forecasters gave everyone plenty of warning about the pending storm, which is a good thing, especially for the people hit hardest in the eastern part of the state.

Watching TV reporters try to talk while being buffeted by hurricane-force winds was both nerve-wracking and telling. It certainly brought home the ferocity of the storm, though you couldn’t help but worry that a piece of debris or gust of wind would wipe somebody out.

The Salisbury Post prepared for the worst not only for ourselves, but also for one of our sister papers in the Boone Newspaper organization, the Washington Daily News. “Little Washington,” as it’s sometimes called, is on the banks of the Pamlico River. For a while, Florence appeared to be headed straight for the town. If the staff at the Daily News for some reason could not produce a paper afterwards, we were on call to fill in.

Fortunately, that didn’t happen. Washington is having its share of troubles — 90 percent of its streets flooded — but so far the town has escaped the destruction seen farther south. The reporters, editor and publisher have kept the news coming.

We plan to do the same.

Florence is slogging across the region at a very slow pace, but the recovery process has already begun.

This is serious business. You can tell by the look that’s been on Gov. Roy Cooper’s face for a week.

Hurricanes are called disasters for a reason. The deaths are so tragic — a mother and infant crushed by a fallen tree in Wilmington, a 77-year-old man blown down in Lenoir County while going out to check on his hunting dogs.

Another Kinston man, 78, was electrocuted while trying to connect two extension cords outside his home. A 61-year-old South Carolina woman died after her car crashed into a downed tree around 9 p.m. Friday.

Even the state’s best preparation efforts can’t save everyone.

During snowstorms and hurricanes and such, the working world divides into two kinds of jobs: those that send you home because of bad weather, and those that require all hands on deck to respond to bad weather and the calamity it brings — first responders, hospital staff, journalists and the like.

In between, there’s actually a third kind of job — or boss — that expects everyone to keep being productive despite the danger and distractions.

I’m told someone posted the below notice at the Rowan County Courthouse last week:

“Category 1 Hurricane: No excuse for being late. Leave earlier to give extra time to avoid fallen trees and limbs.

“Category 2 Hurricane: Due to the horizontal rain, you may dress casually.

“Category 3 Hurricane: Whereas most of the area will be flooded, we suggest you avoid wearing open toe sandals when coming to work. Canoes/kayaks will be provided to get in the building safely.

“Category 4 Hurricane: More than likely there will be no electricity. Office personnel will be given manual typewriters and rotary dial phones. If you choose to wear makeup, we suggest waterproof.

“Category 5 Hurricane: Velcro will be provided to keep you attached to your seat when the windows and doors blow out. For those that survive, we will have chocolate cake at 3:30 in the conference room.”

As we watched the impending whirl of Hurricane Florence, people shared stories about Hurricane Hugo. “Reminiscing” doesn’t seem like the appropriate word for recalling a destructive storm.

I was associate editor then, facing a morning deadline for an article of some kind. I got up before dawn to work on the story at home.

That was before the days of laptop computers, so I was planning to write it out longhand. What I didn’t anticipate was a power outage. So there I was, scribbling away at the kitchen table by candlelight when what sounded like the roar of a train came through.

I hope by the time we’re saying goodbye, Florence, that no more lives will have been lost.

Thank goodness for meteorologists, who warned us that this hurricane was building off the coast.

Thank goodness for all the officials and public servants who make it their business to protect us at times like this.

And kudos to the TV reporters who broadcast live from the teeth of the beast. You got our attention.