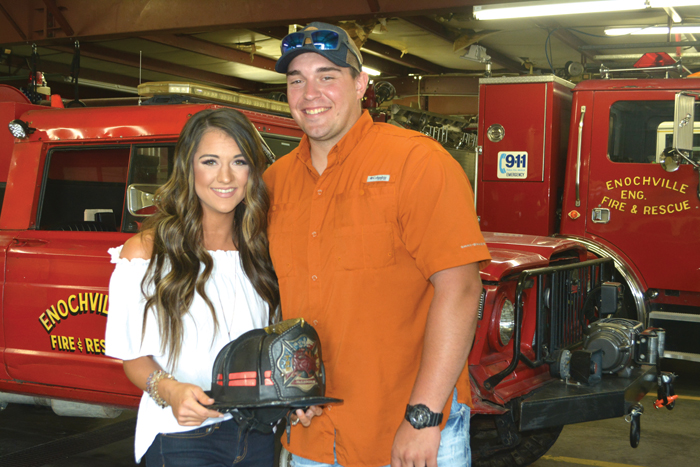 Megan and Bubba McLaughlin married in May. He’s realized his dream of being a full-time firefighter after collapsing on Sept. 21. 2016, at rookie school at the Concord Fire Department.

ENOCHVILLE — Bubba and Megan McLaughlin are finally living happily ever after.

OK, fine. But they’ve made the “happily” part.

On Sept. 21, 2016, Bubba collapsed during a training run at the Concord Fire Department, where he was in rookie school. His firefighting brethren immediately surrounded him and, using CPR and a defibrillator, brought him back to life. 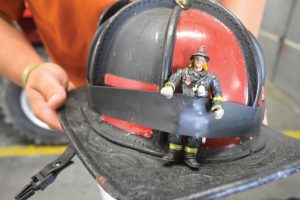 Bubba McLaughlin has attached one of his old toys to his helmet.Bubba spent nine days at Carolinas Medical Center NorthEast, six of them in intensive care. Every day, Megan was there.

Megan and Bubba dated in high school and college but they were not dating at the time. But she felt a need to be there and see that he was OK.

“I wanted to be there with his family to rally around him,” says Megan, 23.

Once Bubba got home, it was a waiting game to see whether he could return to firefighting. 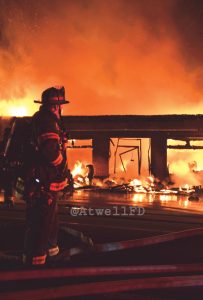 Bubba helped fight a fire at a convenience store in July that was extremely hot because of the weather.
Photo courtesy of Atwell Fire DepartmentFor Bubba, the wait was excruciating. He comes from a family of firefighters, including his father, Gary; an uncle, Johnny; and his brother, Ryan Yost.

So his best friend, Patrick Bearden, and Patrick’s wife, Ruby Ann, started asking Bubba to do stuff to keep his spirits up. Since Ruby Ann and Megan are best friends, she naturally joined them.

The two showed up at the same Halloween party in similar red and black plaid flannel shirts and vests. Then they started texting each other. (She started it, he insists.) Then they went to dinner one night at El Amigo’s.

They rode around in his pickup for three hours, then talked another three hours. They got engaged on Dec. 30, 2016.

They were married on May 20 at Bermuda Run. Bubba even wore his turnout gear at the reception. 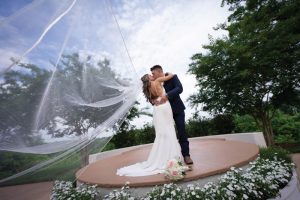 Megan Lambert and Bubba McLaughlin were married May 20.
Photo by Serdar Gulmez

They’ve cleared a lot beside his parents’ home but are waiting until Megan finishes cosmetology school to start building.

“The thought of building your forever home at 23 is scary,” Megan admits.

“When I’m home, I’m always playing catch-up,” Megan says. “We’re there long enough to make a mess, but not long enough to clean it up. We’re still trying to figure it out.”

They’ve learned to buy milk by the half gallon so it won’t go bad.

When they went on their honeymoon at Wrightsville Beach, they had to stop and see a friend of Bubba’s at the nearby Leland Fire Department.

Along with her schoolwork, Megan teaches dance classes at Motion Dance in Concord and is entering her third season as a TopCat cheerleader with the Carolina Panthers. Bubba says he’d much rather go to football games than the beauty pageants she used to enter.

The internal defibrillator Bubba’s had for the past two years gives him no trouble. He recently took a hazmat class at the Concord Fire Department. It was a bittersweet drive for him because he was never cleared to return to work.

Instead, he was able to see a doctor in Richmond, Virginia, who cleared him for duty. That physician had cleared another firefighter in the same situation. The Virginia firefighter has served on a truck for 11 years while wearing an internal defibrillator.

“If Mom told me to move on once she told me a thousand times,” Bubba admits. “But I wasn’t having it.”

Bubba now works full time at Bostian Heights Volunteer Fire Department and also works paid shifts at Atwell and Enochville. And if he’s home at night and hears the alarm go off at either place, he’ll probably go, he says.

He’s continuing to work toward his goal of advancing his career — and working on that “after” part of “happily ever after.” 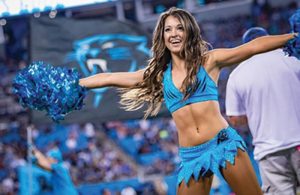 Megan McLaughlin is beginning her third season as a TopCat cheerleader for the Carolina Panthers.
Photo by Goodstuff Creative