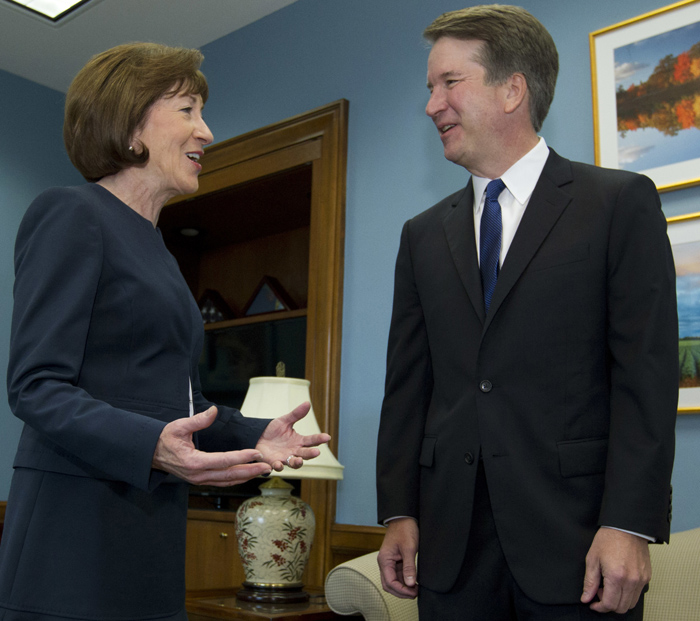 Is it illegal to tell a politician what you think about an issue and vow to back her opponent if she disagrees?

Such a straightforward question should be easy to answer, but it’s not. That alone is an indictment of the hundreds of pages of statutes and regulatory rules that constitute our federal campaign-finance laws. Even the late Justice Antonin Scalia once admitted that “campaign finance law is so intricate that I can’t figure it out.”

This week’s hullabaloo began in Maine when a crowdfunding campaign by two liberal groups to pressureRepublican Sen. Susan Collins topped $1 million. There’s one catch: The groups would only charge the pledgers’ credit cards if Collins votes to confirm Supreme Court nominee Brett Kavanaugh. A to-be-determined Democratic nominee would then get the money if Collins seeks re-election in 2020.

Collins called the effort “the equivalent of an attempt to bribe me.” Others argue that the organizers, Mainers for Accountable Leadership and the Maine People’s Alliance, along with Crowdpac, the website hosting the campaign, are violating federal law.

At its core, much political action is transactional. Voters ask candidates to do (or not do) certain things, and either offer their support or threaten to withhold it, depending on the candidate’s response. Collins knows that every high-profile vote — even a principled one — will alienate some voters and donors while pleasing others. But is this particular tactic legal?

Others have suggested the statute doesn’t apply because the funders are not offering anything to Collins — they’ll be giving it to someone else. Is it a “thing of value” to not give money to a candidate’s opponent?

I think the answer to each of these questions is a clear “no.” Few would consider it an illegal bribe, for example, if an advocacy group threatened to turn out 100,000 opposition voters unless the officeholder went the right way on a crucial issue. But could an ambitious U.S. attorney get an indictment or a plea bargain on the theory that this is a corrupt offer of “anything of value”?

I’m guessing probably yes. Whether a jury would convict is another question.

These uncertainties illustrate the dangerous complexity of our public corruption and campaign-finance laws. Americans should not have to consult a lawyer before engaging in political advocacy but, too often, they do, and even then, the answers are not always clear.

The second element here is campaign-finance law, which prohibits direct corporate support for candidates. Crowdpac — which is actually a for-profit corporation, not a political action committee — argues that its fundraising methods were specifically approved by the Federal Election Commission in a 2014 advisory opinion. But that opinion was based, in part, on Crowdpac’s assurances that it would offer “all candidates an equal opportunity” and operate “on an equal and nonpartisan basis.”

Crowdpac abandoned that model earlier this year, suspending all fundraising campaigns for Republican candidates, so the advisory opinion may no longer protect it.

But should Crowdpac have to serve all comers? We don’t require pollsters, consultants or printers to make their services available to all candidates. In a later advisory opinion, the FEC’s three Republican commissioners voted that a website such as Crowdpac need not serve everyone. But the commission’s three Democrats disagreed, so the issue remains unsettled. If a complaint is filed, it will be interesting to see how the commission votes. Crowdpac’s position may be dicier than it thinks.

Then there is the Maine People’s Alliance, which is also an incorporated entity. Thanks to the Supreme Court’s Citizens United vs. Federal Election Commission decision, the group can spend money urging votes for or against a candidate. But it is still prohibited by law from using its corporate resources to raise funds for a candidate’s campaign, meaning the Alliance may have run afoul of the law. It wants to overturn Citizens United but, perhaps, it should be calling to expand it.

Legalities aside, the Crowdpac campaign is jarring for its “vote our way or else” tone. What should be reassuring, however – regardless of how one feels about Kavanaugh — is that it has almost no chance of succeeding. Collins is highly unlikely to change her vote because of these fundraising threats.

For those who tell us money is the root of all political evil, that should be an encouraging result.

Smith is chairman of the Institute for Free Speech, a former Republican chairman of the Federal Election Commission, and a visiting fellow in the James Madison Program at Princeton University.