A few bricks short: Collection goes back to 1800s 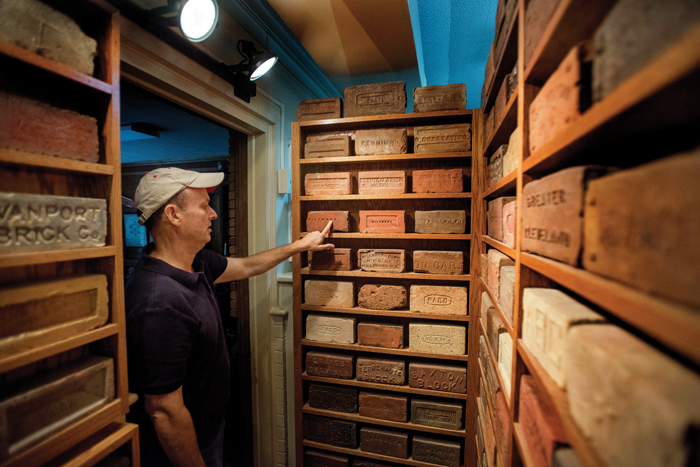 JON C. LAKEY / SALISBURY POST Steve Blankenbeker points out a few of the North Carolina made bricks that is in the collection. Blankenbeker develops materials for Taylor Clay Products and Brick Company gives the history of the items in a large brick collection on display at the Salisbury Company. . Salisbury, NC. (8/22/18)

SALISBURY — Who knew the world of bricks could be so fascinating? Steven Blankenbreker, for one. A ceramics engineer who studied at N.C. State, his collection is a paltry 350 bricks today, compared to the 4,000 he once had.

His personal collection is displayed at Taylor Clay Products and is not open to the public. It includes bricks from as far back as 1860.

The bricks in the collection vary in size, color, texture, shape and detail. Some bricks are embossed, with pictures or words standing out above the surface; some are debossed, with words or images stamped into the clay.

A favorite is the Lincoln Commemorative brick, which dates back to 1910. The town of Equality, Illinois, had hosted Honest Abe during the “Tippecanoe and Tyler Too” campaign in 1840 when Lincoln debated in favor of William Henry Harrison for three days. “The townspeople never forgot the storytelling and persuasive powers of the young lawyer, Abraham Lincoln…” says the Hannibal Courier-Post, and a local brick maker marked the event in 1910 with the issuance of the brick. The 200th anniversary of Lincoln’s birthday in 1995 prompted a re-issuance of the bricks, but Blankenbreker’s is an original.

Because Taylor Clay’s trademark is a tiger, they produced a tiger brick in Cincinnati, where they started business in 1860. Blankenbreker picks it up reverently. “This is as amazing a brick as you’re ever going to see.” It’s another embossed brick, the raised tiger crouched as if to attack its prey. The brick is dense and solid, despite its age.

Shape was important in the days when streets were paved with brick. A Robeson Clay brick has raised letters spelling the company’s name. The bricks were laid with the raised letters turned to the side. The letters caused a gap between bricks just wide enough for the sand to fill between and hold everything securely.

Another shape of note is the Clydesdale “hill brick.” On the face, this brick looks like a rectangle with a corner lopped off. The lopped corner was laid against a regular brick edge, forming a tiny ledge to give horses’ hooves traction to climb hilly streets.

A historic brick from the early 20th century has debossed letters reading, “Don’t Spit on Sidewalk.” This brick was an initiative of Dr. Samuel Crumbine. Crumbine served as secretary of the Kansas State Board of Health for 20 years, much of it during a deadly tuberculosis outbreak. Spitting on the sidewalk was a common, if unsanitary, habit in those days, and Crumbine ordered brick with this admonition. The preferred word at the time was, “expectorate,” according to the Kansas Historical Society, but a brick maker in Topeka came up with the shorter phrase.

Embossed brick and debossed brick have distinctive differences. To deboss a brick, a roller is fashioned with the correct sequence of letters. As the brick moves through production, the roller stamps the letters one by one. Less clay saves a little money, and the recessed letters allow the brick to adhere to mortar better. There are three known styles of Biltmore debossed brick, and Blankenbreker has them all.

Embossing brick uses a mold fashioned just for the particular brick, which takes much longer to produce. Rather than cutting and stamping the clay, a worker must pack a mold and release the clay from the mold before firing. Blankenbreker has several examples of embossed bricks including, of course, the Lincoln gem and the tiger.

Some of his bricks were made in prisons: “Ohio State Reformatory,” “Convict Made, 1912,” and “OSPN” — for Oregon State Penitentiary — to name a few. One brick states, “Indian Territory,” and another, “Oklahoma Territory.” Oklahoma became a state in 1907, so the brick likely dates to the 1800s.

Blankenbreker is a member of the International Brick Collectors’ Association. The group boasts over 1,800 members and they host brick swaps in various parts of the U.S. three times a year. “There’s no value in the brick,” he says. “They can withstand the weather, they’re unique for a hobby, and at some point you think, ‘I can do this!’”

Case in point: When Blankenbreker was first married, his young bride asked that his collection stay outside. He complied, with no damage to the bricks.

Collectors typically gift bricks to one another or trade their duplicates for something they don’t have. Brick collectors, he says, are quite generous and often give bricks away to someone who might enjoy them.

Regional bricks are a common sight in Ohio and Pennsylvania, where he is from, and he had saved a few of them over the years. One day a collector from the IBCA sent him a World’s Fair brick, “and I was hooked!”

That brick is from the 1893 Chicago World’s Fair. If a brick can be beautiful, this one is. The Chicago World’s fair was held to celebrate the 400th anniversary of Christopher Columbus’ arrival in the New World, and Blankenbreker’s brick is a memento of the event.

There are still a few bricks he has yet to collect: an E.A. Poe brick from Fayetteville; a Jeffries Brick from Rocky Mount; and a brick from the Buncombe Brick Company. The Buncombe plant went out of business in 1895 and the brickyard was rebuilt into a tuberculosis sanatorium.

In the meanwhile, he’s saving some of his iconic Tiger bricks — so he can swap them for something really rare.