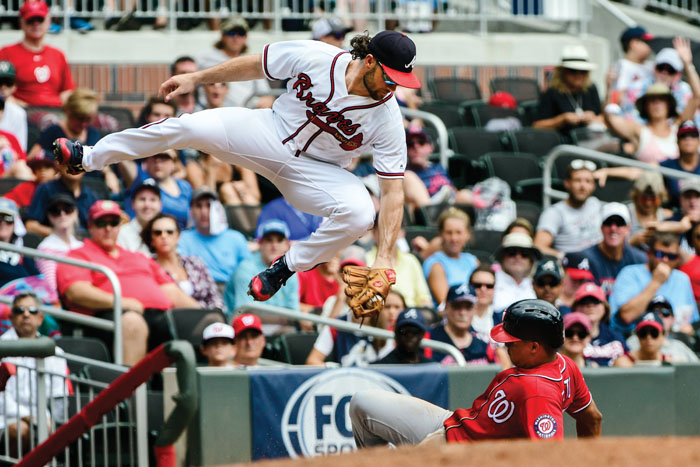 Washington Nationals' Juan Soto steals third base as Atlanta Braves third baseman Charlie Culberson tries to make a tag after going high for the ball during the fourth inning of a baseball game Saturday, Sept. 15, 2018, in Atlanta. (AP Photo/John Amis)

ATLANTA (AP) — Juan Soto shrugged off his latest accomplishment after showing what he can do on the bases.

“I stole three bags, and I helped my team to win,” he said. “That’s pretty good.”

Soto become the youngest player to steal three bases in a game, had an RBI single and scored the tiebreaking run, helping the Nationals stop the Atlanta Braves’ season-best, six-game winning streak with a 7-1 victory on Saturday.

Soto hit an RBI single in the first inning and stole second, then walked in the fourth, stole two bases and came home on a bases-loaded walk for a 2-1 lead. He surpassed the mark set by Oakland’s Rickey Henderson at 20 years, 241 days on Aug. 23, 1979, against Cleveland, according to the Elias Sports Bureau.

Soto began the day with two stolen bases, but his video study showed he could run on Braves starter Julio Teheran.

Soto also extended his on-base streak to 20 consecutive games to join Hall of Famers Mel Ott and Mickey Mantle as the only teenagers to do so.

“That guy doesn’t surprise me,” Washington manager Dave Martinez said. “He pays attention to what’s going on. He’s a student of the game. He felt like he had an opportunity to run on certain guys and he did.”

Nationals starter Jeremy Hellickson may miss the rest of the season after reinjuring his right wrist while batting in the fourth inning.

Hellickson sprained his right wrist on Aug. 15 when he landed awkwardly while covering home plate after throwing a wild pitch at St. Louis.  He made his first appearance since and got hurt again. The 2011 AL Rookie of the Year is scheduled for an MRI on Sunday.

He grimaced after fouling off the first pitch of his at-bat in the fourth against Teheran (9-8), then swung and missed at a low and outside pitch. Hellickson walked to the dugout and was examined by director of athletic training Paul Lessard.

Andrew Stevenson pinch hit, took two balls and swung and missed at strike three. The strikeout was charged to Hellickson, who allowed two hits and one unearned run in three innings.

Jefry Rodriguez (3-2) relieved to start the bottom half and pitched 4 2/3 hitless innings. He also drove in his first big league run.

Atlanta entered with a 7½-game lead over second-place Philadelphia in the NL East.

Washington opened a 5-1 lead in the sixth when Adam Eaton hit a run-scoring double and Anthony Rendon had a two-run double off Touki Toussaint, who walked four in the inning — one intentionally.

“We’ve got to be aware of that,” manager Brian Snitker said. “We’re winning some games with high walk totals and eventually that’s going to bite you. You can’t have that.”

Rendon has reached safely in a career-best 24 straight games. … Soto, the first player in franchise history with three walks and three stolen bases in a single game, has hit safely in nine straight and has a .351 average with two doubles, four homers, nine RBIs, three walks and nine runs over that span. … Soto ended a streak of four straight games with a homer. His solo shot Friday made him the third teenager to hit at least 20 homers in a season, two behind teammate Bryce Harper in 2012 and four behind Tony Conigliaro in 1964.

Nationals: Harper fell hard on his left wrist with an unsuccessful dive attempt on a liner by Kurt Suzuki that fell in right-center for a single leading off the second. Harper walked three times and struck out twice.

CLEVELAND (AP) — Unchallenged for months, the Cleveland Indians clinched their third straight AL Central title with a 15-0 blowout on Saturday of the Detroit Tigers, who made four errors and managed only two hits.

Francisco Lindor and Michael Brantley connected for back-to-back homers in the first inning off Michael Fulmer (3-12), Jose Ramirez had three hits and the Indians built an 11-0 lead after two on the way to becoming the first team to clinch a division championship.

It’s the initial step toward an October when Cleveland will try to win its first World Series since 1948 — the longest drought in the majors. After so many close calls, the Indians believe this is their year.

Cleveland’s current three-year reign in the Central is the club’s longest since winning five straight from 1995-99. The Indians became the first team this year to clinch a division and the second assured of the postseason after Boston, which will be no worse than a wild card.

Mike Clevinger (12-8) allowed one hit in six innings, and Yonder Alonso added a two-run homer as Cleveland’s offense awakened from a late-season slump.

BOSTON (AP) — Pinch-hitter Brock Holt drove a tiebreaking double off the Green Monster on the first pitch after Jackie Bradley Jr. hit one off the very top of the left-field wall, helping Boston lower its magic number to five.

Rick Porcello (17-7) earned his 10th straight interleague victory, pitching five innings of two-hit ball as the Red Sox improved their major league-best record to 102-47. Steve Pearce had three hits for Boston, and Craig Kimbrel pitched the ninth for his 41st save.

The Mets, who had won four straight, took a 3-1 lead on Brandon Nimmo’s three-run homer in the fourth. With two on in the fifth, Bradley lined a ball that bounced off the top edge of the wall and up, back toward the field. Although the umpires signaled for him to circle the bases, Bradley was sent back to second base when replays showed it didn’t completely clear the red line that signifies a homer.

Paul Sewald (0-6) intentionally walked Rafael Devers, Drew Smith replaced Sewald, Holt hit for Sandy Leon and, on the first pitch, lined one off the Monster in left-center to score both runners and make it 5-3.

Puig hit a solo homer in the fourth off John Gant (7-6) and three-run drives in the fifth against Mike Mayers and in the seventh versus Luke Weaver. Puig raised his season total to 21 homers with the first three-homer game of his major league career. He became the fourth Dodgers hitter since 2000 with consecutive multihomer games after Cody Bellinger, Adrian Beltre, and Shawn Green.

Bellinger hit a three-run homer in the ninth off Weaver and had a career-high six RBIs. The defending NL champions have won four consecutive games and nine of their last 14.

Rich Hill (9-5) allowed four runs, two hits and four walks in five innings, improving to 3-1 in seven starts against the Cardinals, who have lost four straight games for the third time this season.

Seeking their third straight division title, the Cubs entered 1½ games ahead of second-place Milwaukee. Chicago has won three straight and four of five.

Lester (16-6) is 4-1 with a 1.73 ERA in his last six starts, following a mid-season slump. A day after saying closer Pedro Strop has a hamstring strain that will cause him to miss the rest of the regular season, four pitchers combined for two-hit relief.

Cody Reed allowed two hits and struck out a career-high 10 in five innings, matching his longest outing this season.

NEW YORK (AP) — CC Sabathia got clocked early and New York, despite hitting four home runs during a furious rally, kept wobbling toward a playoff spot in a loss to Toronto.

Didi Gregorius hit a solo homer with the Yankees down 5-0 in the sixth inning. It was 8-1 in the seventh before Gregorius and Giancarlo Stanton homered and Miguel Andujar launched a grand slam.

New York began the day with a 1½-game lead over Oakland for the top AL wild-card slot. The Yankees are just 6-7 this month.

Sean Reid-Foley (2-3) struck out 10, giving up singles in five shutout innings. Ken Giles earned his 21st save, nine since being traded from Houston to Toronto.