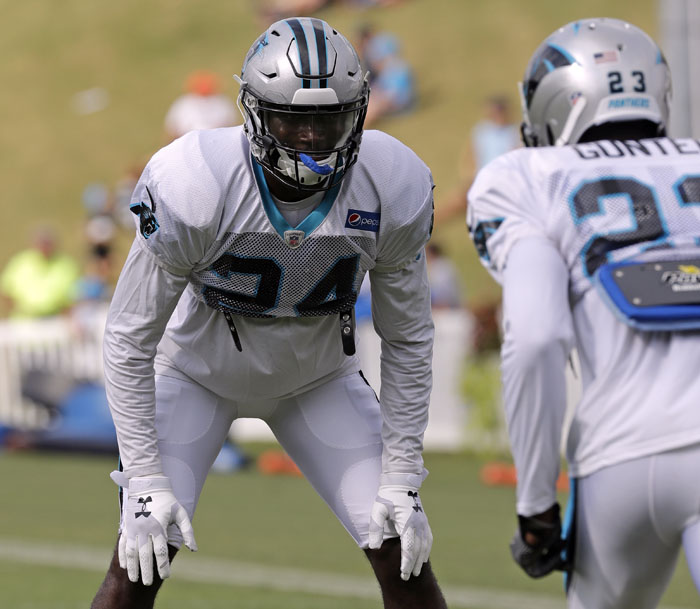 CHARLOTTE (AP) — Panthers cornerback James Bradberry has set his sights on becoming an All-Pro cornerback this season.
He will certainly have the opportunity to prove he belongs in that category.
The Panthers third-year cover man will face the some of the league’s best wide receivers in the coming weeks, beginning with Atlanta’s Julio Jones on Sunday.
Bradberry, who regularly draws the opposition’s best wide receiver, will also match up with Cincinnati’s A.J. Green, New York Giants’ Odell Beckham Jr. and Pittsburgh’s Antonio Brown in the next eight games. He’ll face Jones, Tampa Bay’s Mike Evans and New Orleans’ Michael Thomas twice this season playing in the NFC South.
Bradberry sees this season as a chance to show the rest of the league he’s an elite cornerback and solidify his long-term future with the Panthers.
He isn’t shying away from the challenge.
“That is what I find fun in this game is going against the best,” Bradberry said.
“This year is going to be a special year for him,” said Panthers veteran nickel back Captain Munnerlyn. “He definitely can make a name for himself.”
Bradberry has come a long way since being a part of the secondary that allowed Jones to compile 300 yards on 12 receptions in a 48-33 loss at Atlanta four games into his rookie season in 2016. Bradberry started the game covering Jones but left in the first quarter with a turf toe. He returned briefly in the second half and struggled to keep up.
He said the game has stuck in his memory ever since, and still remembers the crowing chanting Jones’ name in the fourth quarter.
He said the embarrassment of the game still serves as motivation for him.
“I knew we couldn’t let that happen again,” Bradberry said. “It was a disappointment to our fans and coaching staff. I didn’t want to see that reaction on their faces again.”
Panthers coach Ron Rivera said Bradberry is a different player than he was back then — smarter, more experienced, smarter, and better prepared.
Unlike other cornerbacks the Panthers have had — Josh Norman and this year’s rookie Donte Jackson, for example — Bradberry generally doesn’t say much on the field.
Rivera said there is a “quiet confidence” about him.
“The neat thing about James is he’s very steady,” Rivera said. “You don’t see a lot of change in him. He works hard and he’s learned how to work. He understands what it takes in terms of studying and preparation and he talks more.”
Bradberry had better be ready.
Jones’ play hasn’t dropped off since that game.
He remains focal point of Atlanta’s passing game. Quarterback Matt Ryan targeted Jones 19 times in the season opener against the Philadelphia Eagles and he caught 10 passes for 169 yards. So Bradberry is expected a busy Sunday afternoon.
Jones had 11 catches for 198 yards in two games against Carolina last year.
“You have to take your level of competitiveness and ability to another level when you are facing guys like that,” Bradberry said of Jones.
Bradberry called Jones a great athlete and the toughest receiver he’s faced in his first two NFL seasons, but qualified it by saying he hasn’t played against Brown.
“It’s going to be a great matchup,” Bradberry said.
Bradberry only allowed opposing receivers to catch 55.9 percent of the passes thrown his way last season, according to Pro Football Focus.
And while he is Carolina’s unquestioned No. 1 cornerback, he knows that in order to gain some national recognition he needs to find a way to get more interceptions.
He has only four in his first two seasons.
“That’s how you get the voter’s attention, that’s how you get your opponent’s attention is by getting interceptions, causing interceptions and getting the ball back to the offense,” Bradberry said. “That’s the name of the game on defense.”

Clemson to play this weekend with storm battering coastline