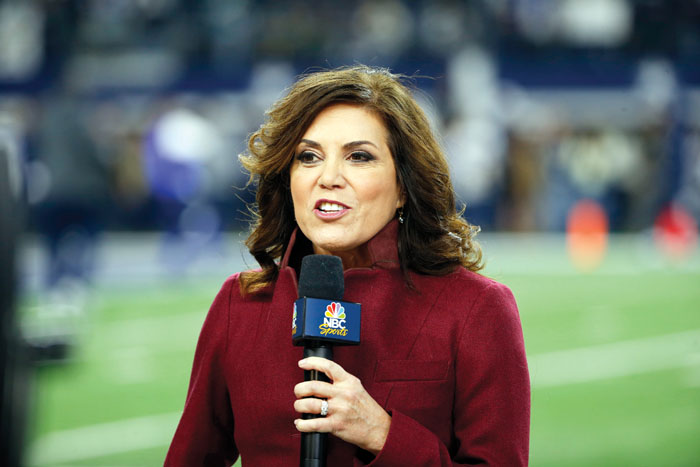 In this Nov. 19, 2017, file photo NBC sideline reporter Michele Tafoya reports before an NFL football game between the Philadelphia Eagles and Dallas Cowboys in Arlington, Texas. Tafoya will work her 250th NFL game as a sideline reported on Sunday night at AT&T Stadium when the Cowboys host the Giants. That's one of the favorite venues for Tafoya, who also has done games for ABC and ESPN and now is with NBC. (AP Photo/Ron Jenkins, File)

Michele Tafoya will work her 250th NFL game as a sideline reporter on Sunday night at AT&T Stadium when the Cowboys host the Giants.

That’s one of the favorite venues for Tafoya , who also has done games for ABC and ESPN and now is with NBC.

“Dallas is a lot of fun, a completely different atmosphere than, say, Lambeau Field,” she says. “It’s like a big party in there. There are people at field level, club seats, music, dancers, all of it making it a party atmosphere.”

It’s also an indoor facility, and that’s a key for Tafoya — or any sideline reporter working football games.

Indeed, one of the first things she checks out when the Sunday night schedule is released by the NFL is how many outdoor games she will have in cold weather, and how many indoor overall.

“The elements are probably always the biggest challenge,” she explains. “We worked the third-coldest game in NFL history, the Seattle-Minnesota playoff game when the Vikings were playing at the University of Minnesota. It was very cold, so we tried to get things in a situation where we had some hot soup to warms us up. You really learn how to layer clothes. I get those hot inserts in the boots to keep warm, you can have a battery in the gloves. You really learn which parkas are warm and which look warm and really are not.”

The real test in such conditions is, well, doing what Tafoya is paid to do: talking.

“Just trying to speak in that cold, it’s very difficult,” she says, almost shivering at the thought even though it’s still summer. “Your face is so cold, your nose is frozen, your mouth is freezing, and you’re trying not to shiver and trying to get out a coherent sentence.

“You just learn a lot of tricks along the way.”

Minnesota’s Mike Zimmer is a rarity as a head coach who continues to call plays for the defense. He has often considered relinquishing the responsibility to defensive coordinator George Edwards, as a way to lessen the load on an already stressful game day, but Zimmer has yet to do so.

“I have a style of how I call a game,” Zimmer says. “George, even though he tries to do it like I do it, I don’t want to tell him, ‘I hate that call,’ or ‘You should’ve called this.’ I don’t think that’s fair to him. If I want something called, I should call it.”

Falcons owner Arthur Blank, along with the team and his MLS club, the Atlanta United, made a $1 million pledge toward storm relief efforts. The grant will be split between the American Red Cross of Georgia and Greater Carolinas Region, as well as the United Way, to assist rebuilding and recovery efforts during hurricane season.

“These types of storms bring devastation that is almost unimaginable,” says Blank. “No matter the region, they disrupt the lives of kids, families, social services, schools, houses of worship and businesses in so many ways, and it’s heartbreaking. So many resources, financial and otherwise, are going to be needed to help people rebuild their lives this season, and we feel a strong responsibility to help. I encourage our fans to join us in supporting this cause in any way they can.”

The teams plan to launch a public service announcement featuring Blank, Falcons and United players. It will be available on digital and social media platforms and will also be shown at Mercedes-Benz Stadium during upcoming games and matches.

The Falcons host the Carolina Panthers on Sunday.

Jackson was released by Chip Kelly in 2014 after having his best season and going to his third Pro Bowl in 2013. He has 20 catches for 440 yards and two touchdowns in five games vs. Philadelphia. He’s been on the winning side four times.

“I love those guys to death, but they’re just an opponent to me,” Eagles right guard Brandon Brooks said. “This week, I’m not thinking about the Super Bowl or nothing like that. That’s my opponent, the guy across from me.”

There will be plenty of Eagles fans from the Philadelphia area at the road game and there’s a fan club called Tampadelphia that could help make it feel like a home game for the defending champs.

It was about two weeks before the regular season arrived that Brandon Marshall took a closer look at the Seattle Seahawks schedule.

The opener: at Denver, his first NFL stop.

Week 2: at Chicago, another of his NFL stops.

“Back to back, that’s pretty cool,” Marshall said. “The biggest one was Denver. Since I’ve left (Denver) in 2010, (I’ve) never got a chance to go back, so it was pretty cool going back. A lot of memories, so it felt good.”

Marshall’s debut with his sixth team went well in Week 1, even though Seattle ended up losing 27-24 to the Broncos. The 34-year-old receiver had three receptions for 46 yards and a touchdown in his Seattle debut.

His role is likely to increase this week headed back to Chicago, where Marshall spent three seasons from 2012-14 and had 272 catches and 31 touchdowns in 45 regular-season games. Seattle will be without its top pass-catching option with Doug Baldwin out due to a knee injury, meaning Marshall could become an even more important target for Russell Wilson.

“You can’t replace Doug. What he does, no one else in the NFL can do,” Marshall said. “I’m just going to continue to be myself. Whatever role I’m given, I’m going to take advantage of those opportunities and be grateful.”