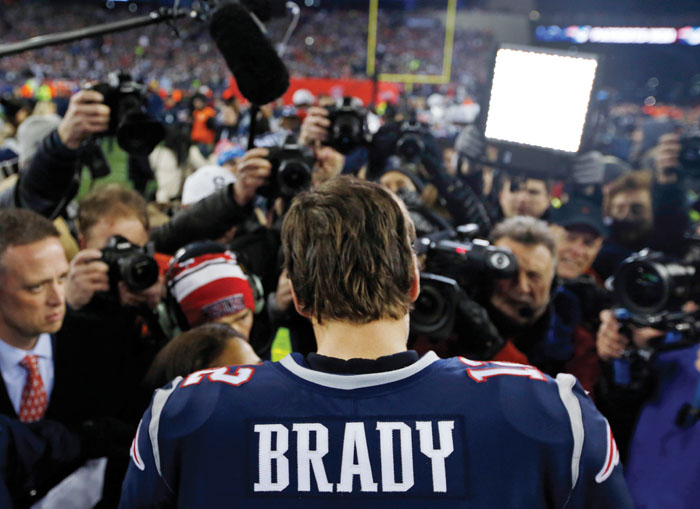 FILE - In this Jan. 21, 2018, file photo, New England Patriots quarterback Tom Brady talks with a reporter after the AFC Championship NFL football game against the Jacksonville Jaguars at Gillette Stadium in Foxborough, Mass. If there's ever going to be a changing of the guard in the AFC, then Sunday's visit to Jacksonville by the Patriots would seem a perfect time. Except when you look at the numbers that say Tom Brady doesn't lose to the Jaguars. Ever. (AP Photo/Winslow Townson, File)

If there’s ever going to be a changing of the guard in the AFC, then Sunday’s visit to Jacksonville by the Patriots would seem a perfect time.

Except when you look at the numbers that say Tom Brady doesn’t lose to the Jaguars.

Jacksonville had a 10-point lead at New England in the second half of the AFC championship game last January when Brady worked his magic, helped mightily by the Jaguars’ discomfort being so close to making the Super Bowl. It shouldn’t have been a surprise in this matchup: Brady now is 8-0 against the Jags, the only AFC team without a win against the five-time Super Bowl champion and three-time league MVP. He has 19 TDs and two interceptions against Jacksonville while completing more than 70 percent of his passes for more than 1,800 yards.

So solving Brady, as it is for most teams, is a must for Jacksonville in this battle of opening-game winners that could wind up pivotal for the AFC playoffs.

“It’s going to be an emotional environment,” Brady said. “I think everyone, whenever you play some of the best teams, you want to see where you’re measured up to, and that defense has been ranked very high all last year, and I could see why. We practiced against them. They were very good. They’ve got a lot of very talented players — some of the guys that are probably the best at their position. So, it’s going to be a great environment for football.”

Brady has 224 career wins, one shy of the NFL record held by kicker Adam Vinatieri, whose Colts are at Washington.

Jacksonville could be short-handed in a key area: running back Leonard Fournette has hamstring issues, and the Jags need a strong running game to keep Brady on the sideline.

T.J. Yeldon would get the start if Fournette can’t go.

“He has always been good,” coach Doug Marrone says of Yeldon. “I think he is more explosive. He’s stronger. He’s elusive. I think he can carry a load of carries.”

The weekend began with Cincinnati’s 34-23 home victory over Baltimore. Andy Dalton threw four touchdown passes in the first half — three to A.J. Green — to help the Bengals improve to 2-0. The Ravens are 1-1.

Not only did the Falcons falter in Philly in their opener, they had two significant long-term injuries with safety Keanu Neal and linebacker Deion Jones. The defense kept them in the Eagles game while Matt Ryan struggled. Sure, he completed 10 passes for 169 yards to Julio Jones, but Ryan generally was off the mark.

Carolina has its own injury woes, losing star TE Greg Olsen with a foot problem. Its defense was super stingy against Dallas, with LB Luke Kuechly in on 13 tackles.

One reason the Eagles had the NFC’s best record in 2017 was a 6-2 road mark. They were sloppy yet victorious in their opener at home against Atlanta and haven’t played since Sept. 6. Nick Foles gets the call at quarterback again with Carson Wentz still not ready, though Philly’s running game with Jay Ajayi, who had two touchdowns last week, and strong defense could decide things.

The Buccaneers come off an impressive upset win at New Orleans in which Ryan Fitzpatrick showed why he has been a quality fill-in passer for years. He threw for a career-best 417 yards, four TDs, and had no interceptions against the Saints. He also scored a rushing TD.

As ugly as the Steelers’ performance was in the rain in Cleveland, that’s how pretty Chiefs fan think their team’s work was in Los Angeles.

But this is a nightmare matchup for KC: The Steelers have won seven of the last eight vs. the Chiefs, who are 0-6 in Pittsburgh since 1986. Plus, the Steelers are 15-2 in home openers at Heinz Field.

Two of the NFL’s most dynamic wideouts go at it here: All-Pro Antonio Brown for Pittsburgh, WR-KR Tyreek Hill for Kansas City. Don’t take your eyes off the field.

Right up until kickoff, the fans at Lambeau Field will be holding their breath to see if Aaron Rodgers can go. Green Bay is in massive trouble if he can’t, as last week’s heroic performance by A-Rod in the comeback victory over Chicago showed.

“Yeah, well, you know he walks on water, so I’m sure he’s going to play,” Minnesota coach Mike Zimmer said.

The Vikings aren’t the Bears and won’t likely be playing passively if they get a lead. Not with that dynamic defense that handed Jimmy Garoppolo his first pro defeat in the opener.

Barring a tie — and we all know those never happen in the NFL, right? — one of these teams will be a surprising 2-0 Sunday night.

The Dolphins come off the longest NFL game since the 1970 merger, outlasting Tennessee in 7 hours, 8 minutes, including 3:59 in multiple weather delays. RB Frank Gore has 14,087 career yards rushing and needs 15 to surpass the Jets’ greatest runner, Curtis Martin (14,101), for fourth place on the NFL’s list.

Sam Darnold threw a pick-6 on his first pro attempt, then reversed things with aplomb at Detroit. The Jets’ defense deserves the highest accolades for making Matthew Stafford look like an inept rookie, something Darnold didn’t resemble beyond that opening pass.

Oh yeah, they do have ties, which for the Browns is a monumental achievement considering they lost all 16 games in 2017 and were 1-15 the previous year. Oddly, the Browns overwhelmingly lead this series 13-4, winning five of the last six meetings.

WR Michael Thomas had a Saints single-game record 16 catches last week for 180 yards and a score. Drew Brees will target him often, sometimes against rookie Denzel Ward, who had two picks of Ben Roethlisberger in the opener.

All seven of the new head coaches lost last week, none more distressingly than Arizona’s Steve Wilks at home against Washington. QB Sam Bradford, the top overall draft choice by the Rams in 2010, now is the Cardinals’ starter, and he has an all-time great receiver in Larry Fitzgerald. Yet Arizona was outclassed in its first game for Wilks.

No such problems for the Rams, who looked strong in all phases at Oakland. A worry, though, is losing All-Pro kick returner Pharoh Cooper to an ankle injury.

The glow from the return of Jon Gruden as coach will fade into the Mile High air if the Raiders put forth another mediocre showing in this bitter rivalry. Oakland struggled in the second half in falling to the Rams, with only TE Jared Cook a consistent positive with nine catches for a career-best 180 yards. The defense clearly missed Khalil Mack.

In all, Jon Gruden’s teams are 1-9 against the Broncos, with the one win coming in Oakland in 2001.

The last time Frank Reich coached in a game that counted, he helped Philly win a Super Bowl. His Colts blew a big lead at home to Cincinnati, but at least Andrew Luck is back behind center. And Luck likes the look of Redskins burgundy: He threw for 370 yards, five TDs and one interception in his only previous game vs. Washington.

After their long, weather-related wait to eventually lose in Miami, and a right elbow injury to Marcus Mariota, the Titans could use a boost in a key early season AFC South game. Mariota should play for new coach Mike Vrabel, who was an assistant in Houston the last four years under Bill O’Brien.

The Texans have won nine of the last 12 against Tennessee, and O’Brien is 6-2 against the Titans. Houston lost at New England last week, but kept things close.

So, first-round pick Josh Allen will start and hope to avoid another debacle after the 47-3 defeat at Baltimore. Allen will have a long leash. Remember, Buffalo’s other QB, Nathan Peterman, threw five first-half interceptions in his start against the Chargers last year. He was just about as bad against the Ravens.

The Chargers have won three straight and 17 of the past 22 meetings. They outscored the Bills by 113-44 in those three victories.

It’s impossible to fathom Stafford being as awful again. He threw four picks, one returned for a touchdown by the Jets. His passes were off the mark most of the game.

Now that 49ers QB Garoppolo has lost a game, maybe the expectations in the Bay Area can be tamped down a bit. Keep a watch out for DL DeForest Buckner (2 1/2 sacks at Minnesota) and LB Fred Warner, who led all rookies with 12 tackles last week and forced a fumble.

Easy to understand why the NFL keeps scheduling this matchup in prime time and why the broadcasting network loves it: big audiences. This year’s faceoff doesn’t have all that much charm considering both teams stumbled, particularly with the ball, in losing openers.

Of prime interest will be the running backs, second overall pick Saquon Barkley, who excited Giants fans with his 68-yard TD burst in his debut, and Dallas star Zeke Elliott.

So the two night games in the second week of the schedule feature a combined record of 0-4. YAWN!

Both teams lost close ones on the road, with the Bears infamously blowing a 20-point lead at Green Bay to a hobbled Rodgers. Seattle gave up 475 yards at Denver and the usually slippery Russell Wilson was sacked six times.