‘I’d rather be safe:’ Hurricane evacuees seek refuge in Rowan 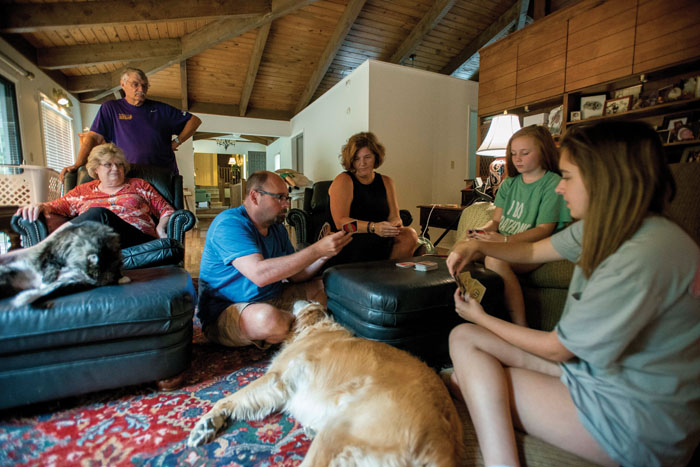 Tony and Jeannie Misenheimer watch their family play a game of Eno in the family room of their Rockwell home. Derek and Heather Stepp and their two daughters, Olivia and Stella, evacuated their Greenville home and are staying with Heather's parents because of Hurricane Florence. Jon C. Lakey/Salisbury Post

SALISBURY — Thousands of people were urged to evacuate this week as Hurricane Florence made landfall on the North Carolina Coast, bringing strong winds and rising water. Many of those shelter seekers found their way to Salisbury during the latter part of the week, holing up with family, friends and even old college roommates.

Chuck and Linda Bowman of Rockwell spent the week watching their rambunctious granddaughter, Rylan, age 4. The Bowmans’ daughter lives in Charleston, South Carolina, but works at a hospital, so she had to work through the storm.

Rylan, however, took an unexpected trip to stay with her grandparents.

“She’s fine. As long as we’ve got cartoons on TV, we’re good,” Linda said with a chuckle.

She and her husband have been keeping tabs on Rylan’s mom, but by midday Friday, it looked like Charleston would escape the worst of the storm.

“It’s almost looking like our weather is going to be worse than theirs,” Linda said.

Other evacuees, however, aren’t sure what will be waiting for them by Monday.

Heather Stepp packed a car and moved inland to Rowan County to stay with her mom, Jeannie Misenheimer.

Stepp lives in Greenville with her husband, Derek, daughters Olivia and Stella, and two dogs, Bella and Pristy. When Florence made a beeline for North Carolina, the whole family evacuated.

“If nothing were to happen, I’d rather be safe than stuck there,” Heather said.

Misenheimer has two other daughters who live in Greenville. One evacuated to the family’s mountain house, but the third stayed home.

“So our family is kind of split up, but we’re all safe right now,” Misenheimer said.

For Stepp and her family, leaving was a difficult decision. But with two girls and a yard full of trees, they eventually chose to evacuate.

“For us, it was just that uncertainty of not knowing,” she said. “… We just didn’t want to sit there for the next two days, 48 hours.”

Greenville is no stranger to hurricanes, however. Stepp was living there in the late 1990s during Hurricane Floyd when the Tar River flooded.

“We had tons of friends who lost everything,” she remembers.

With Florence, the fear is the same. While flooding likely won’t occur for a few days — after swollen rivers rise from rain upstream — it’s still on everyone’s mind.

Stepp said she’s also worried about how the storm will affect business and development. She is a real estate agent and said she had two closings planned today before Florence came. Now everything is up in the air.

“What’s that going to look like on the flip side to our businesses?” she wondered.

No matter what happens, Stepp knows people will pull together. After previous hurricanes, local residents and aid organizations have set up shelters, delivered supplies and helped clean up.

“It’s just going to be a time where we all have to come together and help where we can,” she said.

Stepp’s own company has two tractor-trailers filled with generators on standby, waiting to support those who lose power.

“Everybody pitches in,” she said.

In the meantime, she and her family are safe. They are spending their days watching Netflix and playing games. Stepp said she’s worried about the friends and family who stayed behind and about what she’ll find when she returns to Greenville. But for now, there’s nothing to do but wait.

Erin Hagan evacuated New Bern with her two young children Tuesday. Her husband, Ryan, stayed behind in the picturesque river town where he has a dental practice. His parents, brother and other family also decided to wait out the storm in New Bern.

Erin is staying with her parents, Joy and Van Kelly of Spencer, and has been watching numerous TV news reports of substantial flooding in New Bern.

USA Today and CBS News report that at least a couple of hundred people have been rescued by boat and the town’s historic downtown is flooded in many sections.

“They’re devastated,” Joy Kelly said of the Hagans and New Bern residents in general. “It’s like something they’ve never witnessed before.”

The Hagans live in a subdivision called Trent Woods. Their home is not being threatened by floodwaters right now, but it is without power. A neighbor has power thanks to a generator.

“We know more than Ryan knows,” Joy Kelly said Friday morning of the televised and internet updates they’ve been watching about the storm and New Bern specifically. “… Ryan can’t get out yet. He wasn’t going anywhere. Plus there are trees down.”

New Bern officials declared a curfew from 7 a.m. Friday to 7 a.m. Saturday. The Trent River feeds into the Neuse River in New Bern, and a 10-foot storm surge has been reported.

Ryan Hagan closed his dental practice Wednesday morning in advance of the storm.

The Kellys own a townhouse in New Bern because of their frequent trips to the city. Joy Kelly said she wasn’t sure of its status because their next-door neighbor also had evacuated.

She’s happy her daughter and grandchildren left New Bern when they did, beating much of the traffic associated with the mass exodus from the coast and eastern North Carolina.

Former Salisbury resident Steve Hanf says he has run into several other people who evacuated to the Piedmont since he and his family headed west earlier this week.
Steve and wife Stacy and their children evacuated from their Southern Shores home in Dare County at 3:30 a.m. Tuesday after a mandatory evacuation order went out Monday evening.
Their children are Logan and Delaney, a high school sophomore and eighth-grader, respectively. They’re all staying at the home of Stacey’s dad, Dick Franklin, and stepmother Barbara on Old Mocksville Road.
Steve, a former Salisbury Post sports reporter who now teaches high school journalism, said the family went to the Greensboro Science Center on Wednesday to make the best of their unexpected “hurrication” and encountered another family from the coast.
On Thursday, at Chick-fil-A in Salisbury, they met a couple from Sunset Beach.
Hanf said Thursday that he and Stacey might have waited later to evacuate if they’d known the storm was going to turn south, but they don’t regret leaving their house, which is about a mile from the ocean.
“When they say ‘mandatory,’ there’s no shame in leaving,” Steve said.
He’d rather be cautious than “wind up on the roof hoping to be rescued.”

Harvey and her husband, Will, and their son decided to flee the rising water — stopping by Kinston, where Will has a dental practice, and then Salisbury before heading to Asheville.

“We thought we would leave Wednesday, but then we heard at 8:30 Tuesday morning of the mandatory evacuation by noon, so we ran around for three hours to get packed and ready,” she said.

She’s still in touch with neighbors and keeping tabs on how her home is faring during the storm.

“Someone who’s (in Beaufort) told us the water in front of our house was mid-thigh on a 6-foot adult,” Kristy said.

Their home is above street level on a small rise.

“We’re hoping for the best,” she said.

The home, which Kristy and her mother, Beth Woodson, decorated, was brought back from a derelict when the Harveys decided to move to Beaufort. The house has sturdy storm shutters, which helped them prepare to leave quickly. Harvey and her family also relocated many of their belongings to higher ground.

“We moved a lot of things upstairs, but we didn’t want to go too far up because what if the roof leaks?” she said.

They hope to come back to Salisbury on Saturday and then head to Kinston on Sunday. Her husband has dental offices in Kinston, Morehead City and Beaufort, and they feel the need to start working to get the offices ready to reopen as soon as possible.

“There have been so many storms, and they were all sort of ho-hum, but this one felt different from all the others,” she said.