Fromm and Holyfield play a half, Georgia routs Middle Tenn. 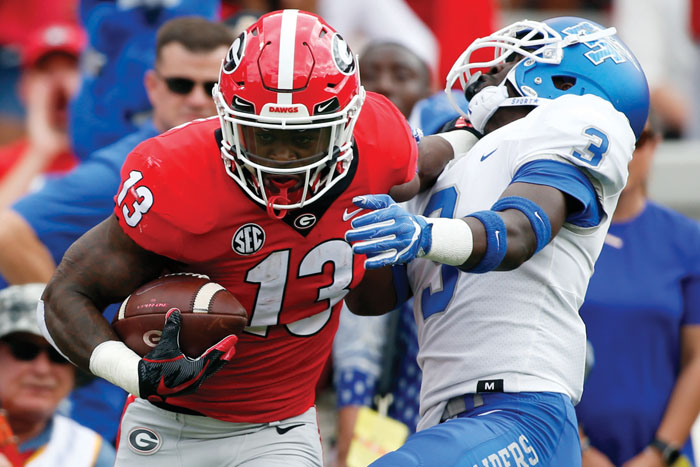 ATHENS, Ga. (AP) — Jake Fromm threw three touchdown passes and Elijah Holyfield ran for 100 yards, each playing only the first half for Georgia.

Georgia (3-0) led the Blue Raiders (1-2) 42-7 at halftime. It was an impressive warmup for the Bulldogs’ stretch of seven straight Southeastern Conference games, beginning next week at Missouri. There were clouds but no rain in the game that was moved up to a noon kickoff due to Tropical Storm Florence.

Freshman Justin Fields ran 15 yards for a touchdown in the first half and threw a touchdowns pass in relief of Fromm. Jeremiah Holloman caught three passes for 90 yards, including an 11-yard scoring pass from Fromm in the first quarter. Mecole Hardman had a touchdown catch and a 70-yard punt return touchdown, and Tyler Simmons had a 56-yard touchdown run.

AMES, Iowa (AP) — Kyler Murray threw for 348 yards and three touchdowns and Oklahoma held off Iowa State 37-27 in the Big 12 opener for both teams.

Marquise Brown had 191 yards receiving and a TD to help the Sooners (3-0), a year removed from a stunning home loss to the Cyclones, extend the nation’s longest road winning streak to 17 games.

Iowa State (0-2) rallied from a 14-point halftime deficit to make it 34-27 late in the third quarter. But the Sooners killed nearly eight minutes on a drive that ended with a 42-yard field goal from Austin Siebert with 2:51 left, and Parnell Motley’s interception with 1:11 to go sealed.

Backup Zeb Noland threw for a career-high 360 yards and a pair of long touchdown passes to Hakeem Butler for the Cyclones. Starting quarterback Kyle Kempt sat out with a knee injury.

Costello threw interceptions on two of the first three drives of the game for the Cardinal (3-0) before settling in a bit against the overmatched Aggies (2-1).

The game kicked off at the unusually early time of 11:01 a.m. local time in front of a sparse crowd at Stanford Stadium. The Cardinal even played without star running Bryce Love, who got the week off to heal some minor ailments. Costello finished 17 for 30 for 214 yards with two TDs and two interceptions.

McSorley completed 11 of 22 passes for 229 yards with an interception and ran for three touchdowns for the Nittany Lions (3-0). He has 24 rushing TDs, two more than Daryll Clark’s previous mark.

The Hurricanes (2-1) never trailed and led 21-0 late in the first half, but Toledo (1-1) twice pulled within a touchdown.

The Hurricanes lost standout safety Jaquan Johnson late in the second quarter to an apparent injury. He was back on the sideline using a stationary bike during the second half.

Despite a slow start, the Wildcats (3-0) outscored the Racers 31-7 in the second half and rolled to a 48-10 victory Saturday. Murray had trouble stopping Kentucky quarterback Terry Wilson, who threw for 163 yards and rushed for 80 more to keep the Wildcats perfect on the season.

Coming off an 11-point victory over the Gators that ended a 31-game losing streak in their Southeastern Conference opener, the Wildcats (3-0) showed no signs of a letdown and overwhelmed the Racers from start to finish. Leading 17-3 at the break, Kentucky pulled way in the second half.

Paced by Wilson, the Wildcats used a balanced offense to defeat the Racers, amassing 528 yards of offense, including 245 on the ground. Wilson targeted nine different receivers, mainly Lynn Bowden, who caught eight passes for 89 yards. Wilson and backup Gunnar Hoak threw for 240 yards and one touchdown.

PITTSBURGH (AP) — Qadree Ollison and the rest of his Pittsburgh teammates found a unique way to combat the lingering effects of a loss to Penn State that could have defined their season: willful amnesia.

And then the senior running back laughed. Just a little. There’s nothing the Panthers can do about their nationally televised second-half meltdown against the Nittany Lions . Best to just move on.

“You’ve got to flush it out,” Ollison said. “You’ve got to forget about it and realize that all our goals are still intact. Nobody said you had to be undefeated to go to the ACC championship or national championship. If we win the rest of our games, nobody will remember what happened last week.”

Not exactly, but Pitt (2-1, 1-0 ACC) took a significant step forward by racing to a three-touchdown lead and holding off the Yellow Jackets late.

Ollison scored on runs of 31 and 8 yards, backfield mate Darrin Hall added a 5-yard scoring burst of his own and the Panthers opened conference play by playing the kind of game they’ll need to repeat many times over the next two-plus months if they want to be a factor in the wide-open Coastal Division.

“We know last week, that really wasn’t us,” safety Damar Hamlin said. “We didn’t get to show who we are as a team. So we just tried to get to this game as quick as we can to get off that bad page.”

Quarterback Kenny Pickett left briefly due with a left leg injury at the end of the first half but played the entire second half, completing 16 of 23 passes for a season-high 191 yards and an interception. Pickett wore a brace on the leg over the final two quarters, something he does regularly in practice but never in games. That will change going forward.

“He’s healthy, but he likes to go run, and he wants to feel clean, but that ain’t going to happen. I’ll tape that thing to his leg.”

A week after rolling up 602 yards in a loss to South Florida, the Yellow Jackets managed just 386 against the Panthers, 99 of it coming on a last-gasp drive in the final minutes. The Yellow Jackets (1-2, 0-1) did little in the first half when six of their seven drives lasted five plays or less.

TaQuon Marshall scored on a pair of short touchdown runs in the second half and finished with a team-high 103 yards rushing. He struggled through the air, completing just one pass until Georgia Tech’s final drive. Marshall ended up 6 of 15 for 66 yards and an interception on a heave to the end zone with just under 10 minutes remaining that was easily picked off by Pitt’s Phillipie Motley to end any real threat the Yellow Jackets had of mounting a comeback.

Some unorthodox decision making by Johnson didn’t exactly help things. He called for a fake punt from the Georgia Tech 28 in the first quarter, and Antwan Owens was stuffed for a two-yard loss. Three plays later Hall scored to Pitt up two touchdowns before the game was 10 minutes old.

Georgia Tech faced another fourth down at the Pitt 23 in the second quarter. Rather than attempt a makeable field goal to get on the board, the Yellow Jackets went for it. Needing five yards, Marshall dropped back to pass, which sailed high and out of the reach of Jalen Camp.

“If we can’t throw a pass that is eight yards and catch it, then that’s a bad call,” Johnson said. “That was a bad call. It was on me.”

Pitt responded with a 60-yard completion from Pickett to Taysir Mack off a flea-flicker to set up Ollison’s second score and take firm control.

Georgia Tech: The Yellow Jackets have to stop beating themselves. The playcalling was odd at times. So were a couple of personal foul penalties on late hits that handed Pitt yardage on drives that turned into touchdowns.

Pitt: Considering the daunting stretch ahead — three of Pitt’s next four are on the road, two against ranked opponents — the Panthers needed a bounce-back performance and they got one.

Georgia Tech: Hosts No. 2 Clemson next Saturday. The Tigers have won five of the last six meetings, including a 24-10 victory last October.

Pitt: The Panthers travel to North Carolina on Saturday. The Panthers are 0-5 against the Tar Heels since joining the ACC in 2013.