Cokie and Steven Roberts: To publish or not to publish? 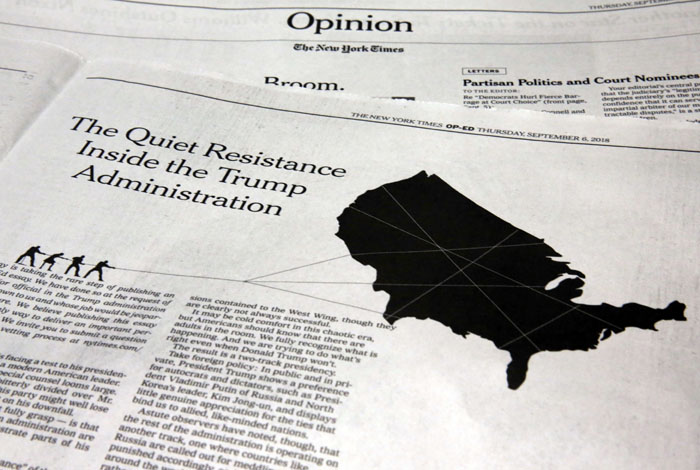 This anonymous opinion piece in The New York Times said there is a "resistance" working "from within" the Trump administration to thwart Trump's most dangerous impulses. Richard Drew/Associated Press

Should The New York Times have published an anonymous op-ed column that describes a White House in chaos and a “quiet resistance movement within the administration” aimed at containing President Donald Trump’s worst impulses?

The column has provoked a fierce debate in many quarters, including the classroom at George Washington University where Steve teaches a course in journalistic ethics. Margaret Sullivan, media critic of The Washington Post, calls the fallout from the article “a quagmire of weirdness.” Trump has accused the author of “TREASON” and called for a Justice Department investigation.

The public is conflicted and confused. A Quinnipiac poll found that 55 percent believe the writer’s allegations. And yet 51 percent say it was “the wrong thing” to publish those charges anonymously.

A similar debate is simmering over the new book by Bob Woodward, who depends heavily on confidential sources to draw a damaging picture of a dangerously deranged president. Even defenders of Woodward and the Times concede that using unnamed sources is never an optimal solution, and always a risk. You’re asking the public to trust you while withholding key information they deserve to know and usually receive.

Here’s the first test that must be met in justifying those risks: Is the story truly significant? Does it tell your stakeholders something they really need to know as informed citizens?

To Sullivan of the Post, the answer in the case of the Times op-ed is yes. “For me, it comes down to newsworthiness — and that the piece has, in spades,” she writes. “Its revelations may not break entirely new ground, but certainly add to our understanding of an administration in dangerous turmoil.”

The second test is whether the information could have been obtained in another way, and the paper insists that was not possible. Trump demands such total loyalty, goes this argument, that no internal critic could have spoken openly and survived. As James Dao, the Times editor who commissioned the piece, put it, anonymity “was necessary to protect the author from reprisal, and the concern has been borne out by the president’s reaction to the essay.”

The third test is making certain the anonymous source is a credible authority who knows what he or she is talking about. Dao assured Times readers that he talked to the author directly, did “some background checking,” and received a recommendation from a “trusted intermediary.”

Critics were not persuaded, calling the essay old news that broke no ground. “The fact that senior administration officials have been trying to block Mr. Trump’s uninformed policy impulses, and mute his self-destructive anger and narcissism, has been reported hundreds of times,” argues a Wall Street Journal editorial.

Others fear that the column will backfire, fueling even more of that anger and narcissism from Trump. As conservative columnist David Frum wrote in The Atlantic, “He’ll grow more defiant, more reckless, more anti-constitutional and more dangerous. … Things will be worse after this article. They will be worse because of this article.”

Trump loyalists echo the president’s charge that the author is “gutless” for refusing to go public. U.N. Ambassador Nikki Haley wrote in the Post that officials who disagree with the president should tell him so directly. “I do it,” she says. “And he listens.”

“If that doesn’t work,” she adds, “and you are truly bothered by the direction of the administration, then resign on principle. But do not stay in your position and secretly undermine the president and the rest of our team.”

Donald Trump Jr. charged on ABC that the op-ed writer is trying to “subvert the vote of the American people who elected my father to do this job.”

An especially damaging criticism is voiced by Woodward, who says the Times description of the author as a “senior administration official” is “too vague” and “does not meet the standards” of authority and credibility he uses in his own book.

“It is very important who it is,” he explained on CBS’ “Sunday Morning.” “It’s very important whether this is somebody who witnessed and participated.” Pressed on whether he would have published the article, Woodward replied, “I wouldn’t have used it.”

This is a close call with no clear answer. Cokie shares Woodward’s reservation that the Times did not sufficiently identify or authenticate the author. Steve agrees with Sullivan that the “newsworthiness” of the column outweighs its drawbacks.

The public will have to make its own judgment — about the validity of the Times column and the behavior of a president the writer finds so fundamentally flawed.

Steve and Cokie Roberts can be contacted stevecokie@gmail.com.

Hurricanes reveal our vulnerabilities. They also show our strength.