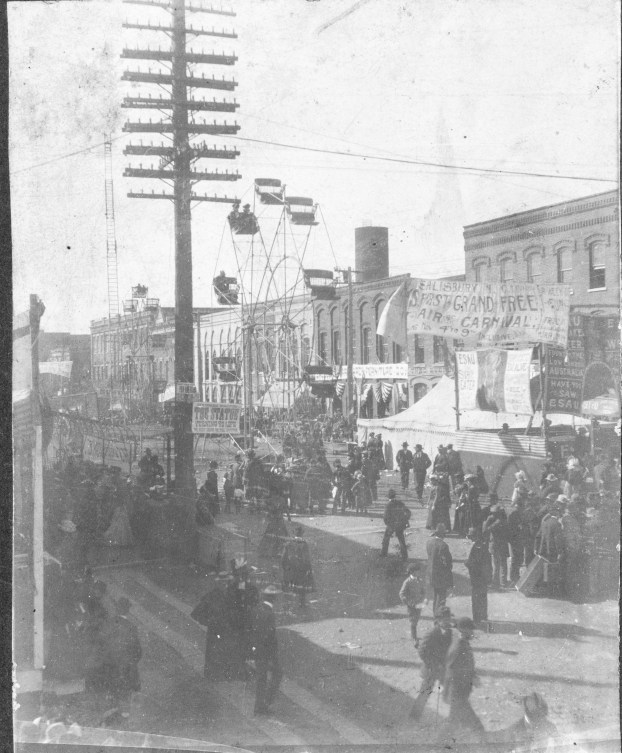 Clyde, Time Was: First county fairs would seem mild to us now

Time was we had a kermis in the fall. Ker for “church” and mis for “mass” — festivals with fairing boxes and trinkets.

In England, country fairs sprang up in strawberry fields forever, and here they were confined to fairgrounds.

The good, old county fair, feriae, was originally about the sale of goods. Remember “to market, to market, to buy a fat pig?” They met him on the way, already coming back with his purchases. Kinda like early birds at a yard sale.

Carnival started out at churches with carnem le vare, literally removal of meat before Lent. Carnivores still lean for a good steak at Duos Santos or Ivan’s. Gives a double meaning to “carnies.”

Paul Bernhardt’s Uncle Val owned a merry-go-round. He was bad to go off with the circus, and he died with it in Virginia.

Early entertainment in our quiet little ’Bury included balls, dances, cock fighting, the Opera House and gambling on horse races where “the streets of Salisbury sometimes served as the path.” Ike Fraley built a track near the Salisbury Lumber Co. and, as late as 1930, W.F. “Walt” McCanless ran the Maple Grove Fair Grounds on what is called “29 South.”

Later on, the Country Club took over where the Sparks Circus had wintered on land that later became “the VA” — the VA Medical Center. There is an elephant buried out there, they say.

George Washington Gale Ferris Jr. first thought about putting Pullman cars on big wheels for the 1893 World’s Fair, and they have been singing meet me in St. Louie Louie ever since. We still get a thrill atop the big top. Don’t rock the car.

Imagine the view at the turn of the century. The midway, halfway between the three rings and the side shows, came about because Buffalo Bill wasn’t part of the main attraction. No contract.

Read more about how Annie Oakley almost “bought the bank” across the river. People have relics from that train wreck.

Of course, everybody’s favorite was the geek show, which originally was a wild man from Borneo eating the head off a live chicken. That has been expanded today to include people we see walking down the street on any give day; their tortured bodies on display.

The first grand fair, Nov. 4-9, 1903, was sponsored by the Rowan Rifles. Imagine veterans raising money for that statue to honor their war dead. Shame on us to question such a noble cause.

Tents and banners across the Square — that was before the sign ordinance. Booths lined dirt streets and invited guests to see a statue that came the like, Esau, the snake eater, and Ki-lo, who could suck the blood out of a rattlesnake. There was a high diver from a ladder over near the stand pipe on Fisher Street. Cheap thrills by today’s standards.

A good time was had by all, but not all alcohol-related events, DSI.

The Fireman’s Convention in 1896 was the one where all the buildings were festooned with flags and bunting. As they say, everybody loves a parade, with bells, sirens, whistles and calliopes. Good luck, Shari and Hen.

What is it about human nature that wants us to show off in an ostentatious display for all to see, in need of a little come-uppance, like boastful Yankees?

We would be better off showcasing our talents and accomplishments for others to see.

“Therefore thou art inexcusable, O man, whosoever thou art that judgest: for wherein thou judgest another, thou condemnest thyself; for thou that judgest doest the same things.” — Romans 2:1

Meet me at the fair.

Time was, fall came. And went. Not like the fog on little cat feet, but on the gossamer wings of... read more