Stories of the storm: Snapshots of people coping with Hurricane Florence 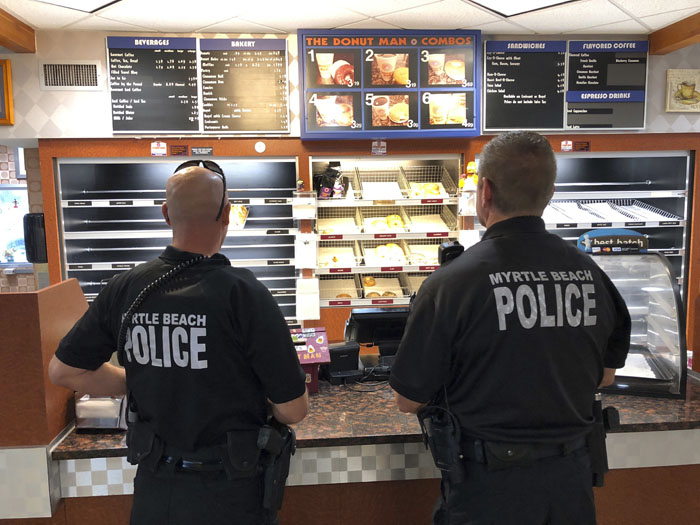 Two police officers place an order at Joseph Santos' Donut Man restaurant in Myrtle Beach on Friday. Santos says he keeps his restaurant open to feed police officers, firefighters and others who have to work no matter what. Jeffrey Collins/Associated Press

Millions of people in the path of Hurricane Florence were hunkering down Friday as the monster storm pummels North Carolina and South Carolina, bringing catastrophic inundations and flooding and forceful, destructive winds. Here are snapshots of people struggling to cope with the slow-grinding storm.

“Donut Man” Joseph Santos might run the only place to eat that is open on Myrtle Beach as Hurricane Florence approaches.

Santos and his wife spent most of Friday preparing, baking and selling doughnuts. A steady stream of police officers, firefighters and other first responders came to the Donut Man restaurant as the rains and winds of Florence settled in. Santos welcomes anyone but stays open for the people who have to work no matter what.

“I see the first responders. They put their lives on the line every day of the year. I can stay open for them,” Santos said, taking a brief break from the kitchen as his wife of 47 years, Maria, worked the cash register.

Santos moved to Myrtle Beach from Massachusetts 14 years ago. He bought an old bank and turned it into a restaurant. That wasn’t a deliberate decision, but the sturdy building and vault in the back help him stay open no matter the weather.

All those pinwheels and whirligigs spun with extraordinary speed and fervor Friday at Vollis Simpson Whirligig Park in Wilson, North Carolina.

They got quite a boost from Hurricane Florence’s winds.

On an otherwise somber day across the state, the downtown park full of whirling contraptions provided at least a bit of a light diversion.

This eastern North Carolina city is about 120 miles north of Wrightsville Beach, where Florence made landfall as a Category 1 hurricane Friday morning, and was receiving fierce winds and heavy rain from one of the storm’s bands.

Tim White, a 64-year-old electrician, is a lifelong resident of the city and self-proclaimed friend of Simpson, the late artist who created the contraptions out of salvaged metal. White walked through the park Friday afternoon to watch the whirligigs spin with his wife.

He said Simpson and his son spent “all their spare time” assembling the dozens of mechanisms for the park before his death in 2013.

FALLING TREES A NUISANCE — AND A DANGER

Numerous trees were down in the Forest Hills neighborhood of Wilmington, blocking driveways and falling on cars and the roofs of at least two houses.

Chris Butcher of the Arborist Plus tree service said his crew had just arrived from Edgewood, Florida, with chain saws, extended tree-trimmers , a generator, and a small front-end loader.

“I’ve been on every hurricane since Fran in 1996,” Butcher said. “We are here to help. And make some money.”

He was helping Mike Kiernan clear trees that had fallen on or near vehicles and damaged the front of the house.

WAITING IT OUT — OR NOT

Bruce Manney eyed the creek at the end of his street in Lumberton, North Carolina.

Two years ago, during Hurricane Matthew, water poured from it and inundated the neighborhood. His neighbors had to be rescued from their houses. Most evacuated this time. But Manney just moved in a month ago and thought he’d be able to wait it out.

“I don’t know anymore, I’m starting to get concerned,” he said.

Authorities say the Lumber River, which feeds the creek that flooded this neighborhood, is likely to crest Sunday even higher than it did during Matthew.

That storm devastated the city, and many neighborhoods have not recovered. The elementary school behind Manney’s home was rendered a total loss in the flood and permanently closed.

He watched the downpour from his porch where he marked how high he’s been told the floodwaters rose, about a foot from the floor.

“If it keeps on like this, I’m getting out of here,” he said.

RESTAURANTS PROVIDE SOLACE — AND SOMETHING TO DO

In Greenville, North Carolina, most roads were open as the city experienced the equivalent of a conventional soaking rainfall late Friday morning.

But most businesses in the home of the region’s primary medical center were closed, some protected by plywood over the windows and with sandbags around the base of doorways.

Some eateries remained available with the determined operation of the odd Bojangles’ and Waffle House restaurants.

A Cracker Barrel restaurant was doing a brisk business. Nursing home worker Cameron Willis, 27, and East Carolina University accounting student Justin Weathers, 22, delighted in finding the restaurant open and a chance to interact with other people.

The neighbors at an apartment complex almost completely vacated ahead of Hurricane Florence said they had plenty of food available at home but needed to see what was happening in the city.

“Bored and stuck in the house. There’s only so much to do,” Weathers sad.

TOURISTS NOWHERE TO BE SEEN

The heart of downtown historic district of Charleston is nearly empty as Hurricane Florence makes its slow trek across the Carolinas.

Pat Reilly of neighboring Mount Pleasant was one of the few people out walking Friday morning on Market Street, where downtown shops typically teeming with tourists were boarded up and fortified with sandbags.

Reilly sells real estate in the Charleston area and has seen his share of storms over the past two decades, including Tropical Storm Gaston in 2004 and Hurricane Matthew in 2016.

“I love a good storm. I haven’t left for any of them over the years,” he said.

Wareheim said he lost power early Friday. He bought a generator earlier this week, but at the moment, it wasn’t very helpful.

“I wish I read the instructions a little more carefully on that generator. It can’t be operated near rain,” Wareheim said. “So I’m going to have to wait until the rain stops. That may be a while.”

The National Weather Service said the area should get heavy rain through Sunday.

Wareheim said so far the wind has only knocked down branches and limbs small enough to be carried. “Nothing you need to get a chain saw after yet,” he said by phone.

Wareheim was preparing for the heaviest winds from Florence, whose center was about 15 miles from his house about 4 miles inland.

Kathy Griffin was hunkering down Friday in a hotel in Wilmington with her husband. They decided to leave their fifth-floor Wrightsville Beach condominium before Hurricane Florence trapped them.

Still, storm conditions were frightful for the retired teacher and Realtor.

Griffin said she was jolted awake when the power went off at the hotel as some of the storm’s strongest bands lashed Wilmington with wind and rain.

As she sat in the hotel lobby eating a cold breakfast of bananas, cereal bars and pastries, she recalled that the decision to heed the mandatory evacuation order for her area wasn’t difficult.

“If you are over there and something bad happens, you’re out of luck,” she said.

She said her Wrightsville Beach unit is insured against flooding and also has glass strong enough to withstand 135-mph winds.

She wasn’t as lucky when a property she owns in Florida was heavily damaged by Hurricane Irma last year.

“We have a house that was destroyed in Irma,” Griffin said. “She came and she went, and it trashed everything inside.”