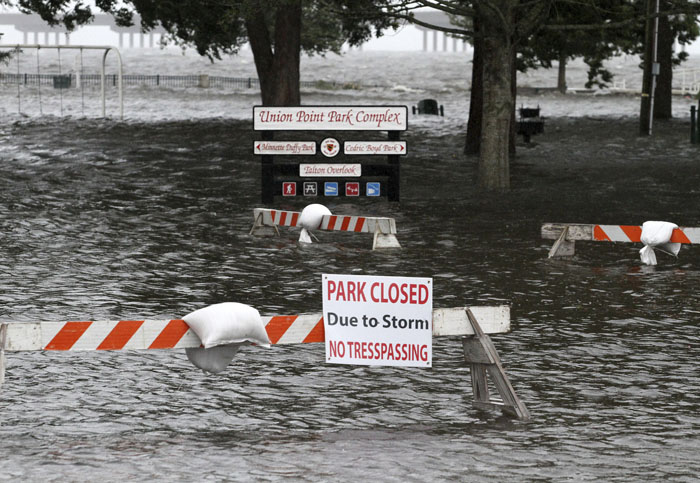 Union Point Park is flooded with rising water from the Neuse and Trent Rivers in New Bern on Thursday. Gray Whitley/Sun Journal via AP

According to the Associated Press, more than 1.7 million people in the Carolinas and Virginia were warned to evacuate over the past few days and the homes of about 10 million are under watches or warnings for hurricane or tropical storm conditions.

Some coastal evacuees have made their way to Salisbury.

Sloan said the hotel, located on Jake Alexander Boulevard, typically has plenty of room midweek. But Thursday afternoon, that wasn’t the case.

Econo Lodge, also on the boulevard, also has seen an increase in guests. A hotel employee said lots of people have been calling to make reservations since Florence turned its gaze on North Carolina.

Other hotels across town have seen a moderate increase in business, but some reported not seeing any uptick at all.

At Hampton Inn, it was a toss-up. General manager Krista Osterweil said that while the hotel has quite a few guests seeking shelter from the storm, several others cut their visits short to hurricane-proof their own homes.

“So some of it has been a bit of a trade-off with normal business,” Osterweil said.

Out-of-towners aren’t the only ones seeking shelter. High winds and heavy rains could pose a risk to some of Rowan County’s most vulnerable residents, including the homeless population.

Erica Taylor, communications manager with Rowan Helping Ministries, said that while the organization is not a disaster shelter, its doors are always open to homeless people seeking refuge.

“We don’t want to see anyone suffering,” Taylor said. “… So we’re doing everything we can to help someone in an emergency.”

The shelter will not turn people away because of bad weather, but those who want to stay the night will have to abide by shelter rules.

“They’ll have to go through the normal process of intake and everything, but we’re not going to turn them out into the weather,” Taylor said.