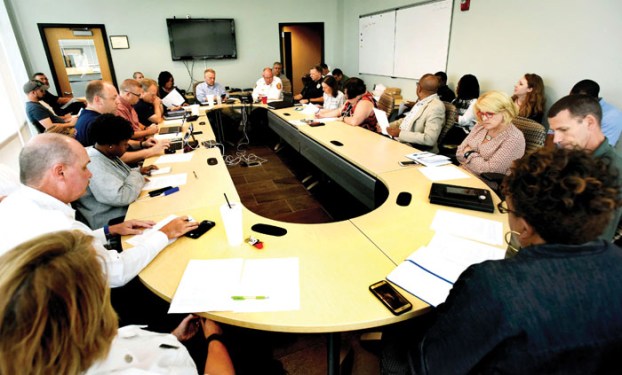 City and county department heads and emergency personnel meet Thursday afternoon to continue mapping out plans for services and responses to the effects of Hurricane Florence. Jon C. Lakey/Salisbury Post

By Shavonne Walker and Andie Foley

SALISBURY — Rowan County is guaranteed to get pounded with rain through Tuesday, says Steve Monday.

On Thursday, the Rowan County Weather forecaster provided an update on the storm during a preparation meeting for city of Salisbury emergency responders and key officials.

“The track has shifted a lot,” Monday said.

Rowan residents will see 30- to 40-mph winds today and rain as early as 1 p.m. this afternoon, he said. On Saturday, there will be sustained 40-mph winds with gusts of 50 to 70 mph, as well as heavier rainfall.

The brunt of the storm will be Saturday and Sunday with 1 to 3 inches of rain by early Sunday morning and an estimated 6 to 8 inches overall, he said.

The worst-case scenario is 12 to 15 inches of rain within the same Saturday-Sunday time frame, he said.

“The biggest emphasis is on the duration of winds, which will make it difficult to keep power,” Monday said.

Rain will linger through at least early Tuesday, he said.

Monday spoke during a meeting that closely mirrored sessions held each morning by county staff. The sessions started Tuesday after the county commissioners declared a state of emergency.

Each department head or a representative has provided updates about storm preparations. The meetings also have helped personnel stay current on action plans and support services available for residents and workers alike.

“The county’s main role is planning, preparing and informing people and then providing support and safety for the citizens,” said County Manager Aaron Church.

Leading the effort is the county’s new chief of emergency services, Chris Soliz.

Soliz came to Rowan County from Colorado, bringing with him more than 25 years of experience in emergency management. He has a master’s degree in emergency services management, has been credentialed through the Department of Defense as an incident commander and safety officer, and is credentialed by Colorado and North Carolina as a division supervisor.

On Tuesday, Soliz and Church announced two resources that are available to county residents.

One is a searchable damage assessment map that will be updated as hurricane-related incidents occur around the county so that responders know where the hardest hit areas are.

Officials are looking into making a form available publicly so that residents can report damage in their neighborhoods, Soliz said.

The map also includes historical flood-plain data, allowing residents to search for their address and evaluate potential risks. Areas most in danger are highlighted in blue.

The city’s GIS coordinator, Levi Coldiron, said the map was developed through composites of a 50-year and 100-year flood map drawn up using technology via sites including the North Carolina Flood Risk Information System.

“Just because these places are marked doesn’t mean these areas are going to flood. It just means they are more prone to flooding,” said Church. “Similarly, just because some houses aren’t in these danger zones doesn’t mean residents don’t need to be worried.”

The map is available through www.readyrowan.org by clicking “Rowan Damage Assessment” in the left column.

A second resource is a dedicated Emergency Operations Center, where officials from multiple departments will be stationed and ready for dispatch.

“(It will be) a lot of different county departments having to do with things like agricultural services to facilities, human services for sheltering, and DHS and DSS will be here,” Soliz said. “… All key players will be in one room so that when any need comes in, we can look right across the table and make it happen.”

Rowan County Emergency Management professionals will be available to answer non-emergency questions related to the local impact of Hurricane Florence.

Residents are urged to continue preparing for the storm and to sign up for community alerts by visiting https://tinyurl.com/rocoalerts

Additional information can be found at www.readyrowan.org, including what to put in a disaster kit and information about power outages and flooding.

Responders continue to remind residents to not drive, walk or try to swim across flooded streets.

Other updates from Tuesday include:

• The Salisbury police and fire departments will have a joint operations center out of Salisbury Fire Station No. 1 on East Innes Street. Police Chief Jerry Stokes said the departments have identified personnel who will be on duty during the entire operation as well as extra staff.

“I think we are as ready as we can be,” Stokes said.

• Fire Department Battalion Chief David Morris said emergency calls will be prioritized and the appropriate response will be given. He warned there may be a situation when responders have to put up hazard tape for a downed utility line, then run to another call. Officials also have a task force to aid other fire departments with water rescue calls, if the need arises.

Battalion Chief Nick Martin warned department heads to inform responders not to rush into a rescue situation for which they are not trained or equipped to handle. They should help the victim remain calm until adequate help arrives. Otherwise, the rescuer may end up needing a rescue.

• Heather LeMaster, a disaster program specialist with the Hanford Dole Chapter of the American Red Cross, said the No. 1 question she has received is why evacuation shelters are not opening.

LeMaster said the main reason is that officials simply don’t know where the storm will strike. She said it would be futile to open a shelter in a neighborhood hit by a power outage. All shelters are on standby. The county’s YMCA facilities would be the primary shelters if needed.

“Our experience is people don’t come if they don’t have,” she said.

LeMaster said the Red Cross will not open a shelter just because of power outages. The only exceptions would be if the outages are widespread for a number of days and if flooding is widespread.

Anyone with special needs who may end up in a shelter must bring with them all their essentials, including oxygen tanks, medications or a home health care worker.

Service animals only are allowed in the shelters. People with household pets must make arrangements for them because pets are not allowed to sleep in the same quarters as humans, LeMaster said.

The Red Cross is monitoring local hotel rates and availability. Many area hotels are about 75 percent full because of bookings for events planned this weekend. But many of those events have been canceled, opening spaces at these hotels.

LeMaster said the Red Cross also has been asked where people can make donations. LeMaster said the organization is not accepting clothing or similar items but has received donations of water for people who have to work during the storm.

• Rowan County parks will be closed Saturday, Sunday and Monday. Full-time staff will be on call and working Monday.

According to a news release, people who have shelter reservations are being contacted for rain checks and refunds. No new campsites will be reserved at Dan Nicholas Campground as power outages are highly probable and would leave bathhouses without hot water and lighting.

• Salisbury Transit Director Rodney Harrison said city buses will be available if residents have to evacuate. The transportation system has diesel fuel and bus drivers on standby.

Mid-Carolina Regional Airport will operate as normal. Kevin Davis, the airport director, said there is not a lot to prepare for. Piedmont Triad Airport will remain open as well with airlines dictating cancellations or flight delays. Charlotte Douglas International Airport recommends that passengers check with their airline for flight information and follow the airport’s Twitter account, @CLTAirport.

Amtrak has canceled several passenger train routes for through Sunday, including:

• Auto Trains (Trains 53 and 53), which run from Lorton, Virginia, to Sanford, Florida.

• Silver Meteors (Trains 97 and 98), which run from New York through Rocky Mount and Fayetteville and end in Miami.

• Crescents (Trains 19 and 20), which run from New York to New Orleans and travel through Greensboro, High Point, Salisbury and Charlotte.

• Silver Star (southbound Train 91), which runs from New York through Rocky Mount, Raleigh, Cary, Southern Pines and Hamlet and end in Miami, is canceled between New York and Jacksonville, Florida.

• Silver Star, (northbound Train 92), which runs from Miami to New York and through Hamlet, Southern Pines, Cary, Raleigh and Rocky Mount, is canceled between Jacksonville, Florida, and New York.

UPDATE: Due to high winds and rain moving in, the fair is canceled for Friday night. Officials plan to open as... read more