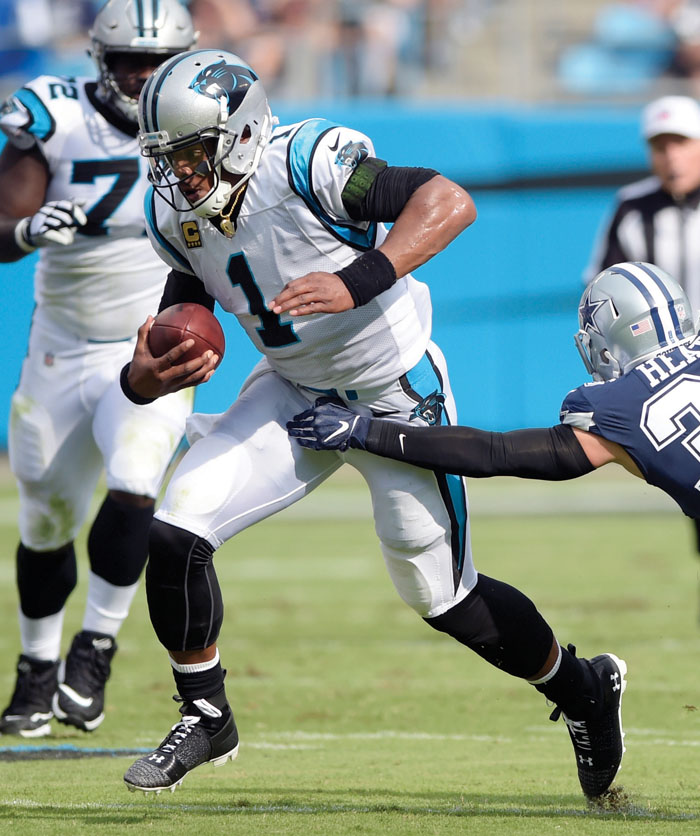 ATLANTA (AP) — One season after the NFC South sent three teams to the playoffs, the division may be just as deep.

The Atlanta Falcons know they can’t afford to fall too far behind in the division as they prepare to play the Carolina Panthers on Sunday. Atlanta made the playoffs at 10-6 in 2017 despite finishing third in the South, behind New Orleans and Carolina.

Now, coming off last week’s loss at Philadelphia , the Falcons (0-1) need to beat the Panthers to avoid falling two games behind only two weeks into the season.

Falcons coach Dan Quinn said the team that wins the NFC South this season “will have been in some fights.”

For Carolina and Atlanta, this is an early opportunity to establish a pecking order in the division.

“For us to have a division game … early in the season, I think it’s good for us and good for the division, too,” Quinn said.

A road win would be another strong statement for Carolina (1-0), which won its opener over Dallas .

Each team has lost key starters to injuries.

Carolina tight end Greg Olsen and as many as three offensive linemen could be held out. Olsen has a broken bone in his foot for the second straight year , but hopes to return this season and has not been placed on injured reserve.

“We are missing a Pro Bowler on offense,” said wide receiver Devin Funchess, referring to Olsen. “We are just here to play our game. Those guys don’t make up their whole team and Greg does not make up our whole team. … I know for sure in our locker room we have the next-man-up mentality.”

The Falcons placed two key defensive starters , safety Keanu Neal (left knee) and linebacker Deion Jones, on injured reserve this week. Neal will miss the remainder of the season. The team hopes Jones will return, but he must miss at least eight games.

Meanwhile, running back Devonta Freeman could be held out with a knee injury. Tevin Coleman would move up to the role of lead back.

Here are some things to know about this NFC South showdown:

The Panthers will turn to rookie Ian Thomas at tight end. Thomas is still very raw having only played two seasons of major college football at Indiana.

“He has everything you would want in a premier tight end,” Newton said. “But he has to believe in himself and know that it starts with understanding the small things make a big difference.”

Quinn prefers having Freeman and Coleman split the carries “because then we can feature the uniqueness of them, the balance of them.” But Sunday could be another chance for Coleman to prove he can be more than a backup. He had six starts in his first three seasons.

“We highly regard Tevin,” Quinn said. “We’ve been down this road if it gets to that, Tevin can certainly handle that.”

Middle linebacker Luke Kuechly and defensive tackle Kawann Short led Carolina’s defense in holding Dallas to 232 yards and eight points last week. Kuechly was all over the field, making 13 tackles. He set the tone with six stops in the first quarter.

“Luke played out of his mind,” defensive coordinator Eric Washington said. “But that’s who Luke Kuechly is.”

In a handoff from one former Louisiana State player to another, Duke Riley will take over for Jones at inside linebacker. Riley had been starting on the weak side.

Rookie Foyesade Oluokun, a sixth-round pick out of Yale, could share time with Kemal Ishmael at weakside linebacker, with De’Vondre Campbell still starting on the strongside.

Damontae Kazee will be start at Neal’s safety spot.