Florence going to hit late tomatoes, corn and even strawberries 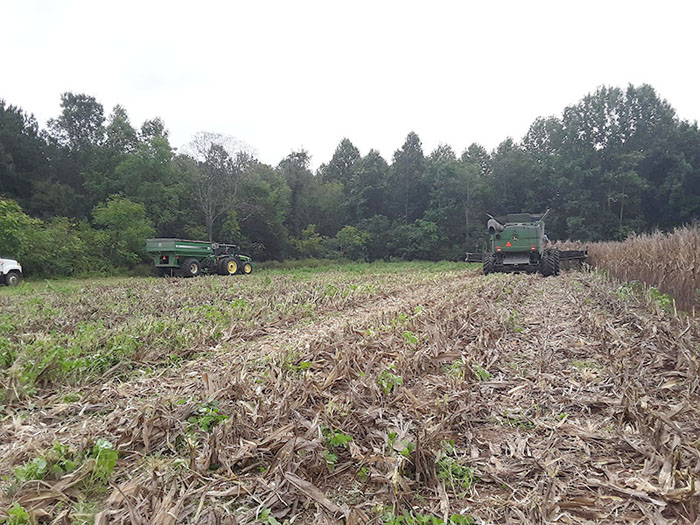 Rowan Cooperative Extension Farmers were rushing Thursday to bring in the corn crop for grain. Heavy rain can flood the fields.

SALISBURY — Hurricane Florence is blowing in some trouble for farmers, grape growers and tomatoes in Rowan County.

The expected winds of 35 mph and rain as much as 7 inches will take its toll particularly on producers like Patterson Farm and Correll Farm, which have tomatoes planted for harvest at least through the early part of October.

“Most of the tomato guys in Rowan typically try to … produce through September and into October,” said Michael Fine of the Rowan County Cooperative Extension office. “The late-season tomatoes can be good for business. I know David Correll is picking as much as he can, and probably picking harder today.”

Fine said Rowan is big in tomato production compared to neighboring counties. “We’ll see a reduction” in that late crop.

“Strawberry folks are trying to get the ground ready,” Fine said.

He thinks most growers have already laid down plastic in preparation for the season.

“You don’t want the field to flood and distort the beds. It puts planting behind.”

The biggest concern now, says Morgan Watts, livestock and field crops agent, is not all growers have harvested their corn for grain.

“We’ve been working on it the past couple days,” she said. “Farmers are working all hours to get the corn in before the rain hits.”

Watts said a couple of people grow popcorn or corn for deer feed, but the bigger producers in the county grow corn for grain.

Watts said many cornfields are in low-lying areas or next to a waterway, and wet corn just isn’t any good.

The Rowan County Fair is expected to open tonight, but Watts said all livestock shows scheduled for today, Saturday and Sunday have been canceled.

“Those folks need to stay home and take care of their animals,” she said.

The other Rowan crop that Florence can hurt is grapes. Anita and Biff Yost own Cauble Creek Vineyard, which grows mostly muscadine grapes.

“We are two weeks out from harvest and we’ve got 50 tons of grapes on the vines. We are going to pray,” said Anita Yost. “It’s in the hands of the Farmer himself.”

Yost said they are diligently watching the weather and expecting winds between 35 and 43 mph and about 6 inches of rain, according to the N.C. Department of Agriculture.

The muscadines are not like the vinifera grapes Tommy and Amie Baudoin grow at Morgan Ridge Vineyard and Brewhouse.

Much of Morgan Ridge’s crop near Gold Hill has already been ruined by excessive rain and high heat.

The chardonnay and cabernet crops “are toast,” Baudoin said. The chardonnay crop was picked weeks ago, but it is no good for making wine.

Amie Baudoin said they talked about picking the cabernet grapes today, but once they looked at the damage — split grapes, mold, fungus — they decided it wasn’t worth the effort.

“When it wasn’t raining, it was foggy or humid, and the grapes never dried out,” Tommy said.

Agent Fine said those grapes are a Mediterranean crop.

“They love dry weather. … But no produce likes this much water,” he said.

Anita Yost said six or seven years ago, a microburst laid down their muscadine vines, “but we got them back on the posts and they were fine. If they’re just laid down, we can survive that. This is the type of stuff that’s in the Lord’s hands.”

“The chambourcin is perfect, and the merlot is perfect,” she said. “Out of our seven varieties, we lost four. This is the third year in a row we’ve lost the cabernet to weather.”

Tommy said he has enough grapes to make about 1,000 cases of wine.

The Baudoins own a cottage in Gold Hill that is housing evacuees from the coast, one of their beer customers. Thursday was Amy’s birthday.

“Looks like a got a hurricane for my birthday,” she said. “But we’re hanging in there.”