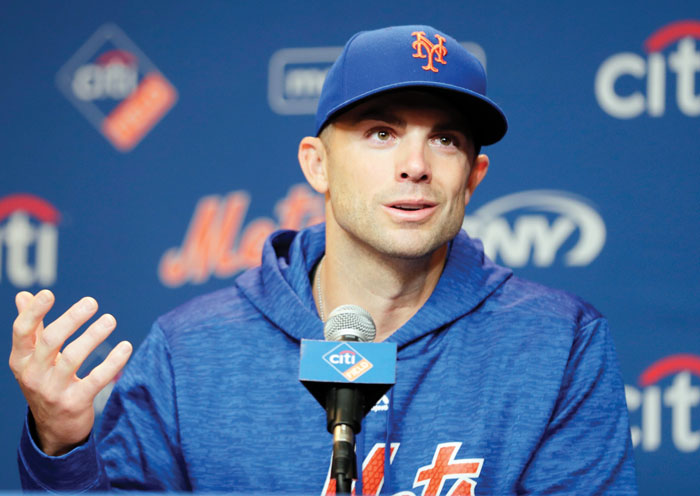 NEW YORK (AP) — New York Mets captain David Wright will return for the team’s final homestand, making what will probably be his last appearance as a big leaguer.

The Mets said that they plan to activate Wright when they return to Citi Field on Sept. 25 against Atlanta. The 35-year-old is scheduled to start at third base on the second-to-last day of the season against Miami.

It would be his first major league game since May 2016. Wright has worked to return from a litany of neck, back and shoulder injuries that have required surgery.

Although he’s not officially retiring, Wright is not expected to play again after this season.

“The way I feel right now and from everything the doctors have told me, there’s not going to be an improvement,” Wright said when asked if he could play beyond 2018. “So, yeah, I don’t see that as a possibility.”

Mets Chief Operating Officer Jeff Wilpon and Senior VP of Baseball Operations John Ricco joined Wright for an emotional news conference prior to the club’s doubleheader against the Marlins to make the announcement, ending speculation on whether the seven-time All-Star would return.

“David Wright is a Mets icon, one of the finest players and people ever to wear the uniform, Mets uniform or any uniform, and clearly our fan favorite,” Wilpon said.

“Despite more than two years of hard work, three surgeries and a rehab assignment, his body’s still preventing him from making it back. I’ve had many conversations with David and he’s told me that he wants to end this year on our active roster.”

Wright’s contract includes salaries of $20 million this year, $15 million next season and $12 million in 2020. By reinstating him from the 60-day disabled list, it would likely lessen the amount of insurance money the Mets could collect.

“David has earned the opportunity to return to the major league field. Out of respect for him personally, professionally, and for our fans we want to give him that opportunity,” Wilpon added.

“The decision has nothing to do with insurance or finances. It’s about David’s long-term health, his quality of life and desire to get back on the field. Giving him the chance to return to the field is the right thing to do for David, our organization and the fans.”

Wright appeared in 12 rehab games in August, hitting a combined .171 with a double and two RBIs in 41 at-bats for Class A St. Lucie and Triple-A Las Vegas. Wright took live batting practice twice since Saturday and also fielded grounders.

“A lot of times my mind and my heart were telling me one thing and my body was telling me something completely different,” Wright said.

“Once things ramped up and baseball activities got tougher and certainly the games became for me more of just, ‘Let me get through this and survive it,’ it became more apparent to me that that goal is now, I just want to put this uniform on again.”

A first-round pick of the Mets in 2001, Wright has hit .296 with 242 home runs and 970 RBIs in 1,583 regular-season games. The longest-tenured active player with a single team in the major leagues, he is the team’s all-time leader in hits, runs, walks, RBIs and doubles.

“I’ve been wearing this uniform or something similar for half my life now, and that’s an honor that I don’t take lightly and something that I take a lot of pride in,” Wright said, choking back tears. “I truly bleed orange and blue.”

In the room were several of his teammates including Jacob deGrom and Michael Conforto, along with manager Mickey Callaway. Wright informed them of his plans in the clubhouse prior to the announcement, pulling a small group aside before addressing the entire team— one that included longtime teammate and friend Jose Reyes.

“I think he (Reyes) was probably the reason I teared up so much because he gave me a big hug and you just can’t help but to think about how this started and then you get to this point,” Wright said.

“I just really enjoy getting a chance to be around Jose, to reminisce a little bit, before I had to put in all this work to take a swing. When I used to just be able to kind of roll out of bed and play the game.”

Reyes tweeted a simple “Love you #5,” with a heart emoji.

Another factor in Wright wanting to take the field one more time: his two young daughters, Olivia and Madison.

“I really, really am going to love that game because they get a chance to see me play in the big leagues for the first time and for me that means a lot,” Wright said. “We got my 2-year-old Olivia out there, trying to teach her how to throw and catch now, so it’s going to be special to have her there for sure.”

Wright is unsure what his future holds, but said he’d like to stay involved in baseball.

“When I went on that minor league rehab assignment, you know these 18, 19-year-old kids come up to you and they ask these questions and I love sitting down and talking baseball,” Wright said. “I really enjoy that.”

One thing is clear, however: The longtime face of the Mets is satisfied with the effort he gave over a long and successful career.

“I wish that things could have certainly turned out different for me physically but as far as regrets go, I can’t say that I have regrets because I felt like I knew one way to play the game,” Wright said.

“I’ve tried to play that way and there’s not a lot of people out there that can say that they’ve made it to the big leagues, that they got to be with one team for their entire career, and they go to captain that team and have the success that at least in my mind I’d like to think that I did.”