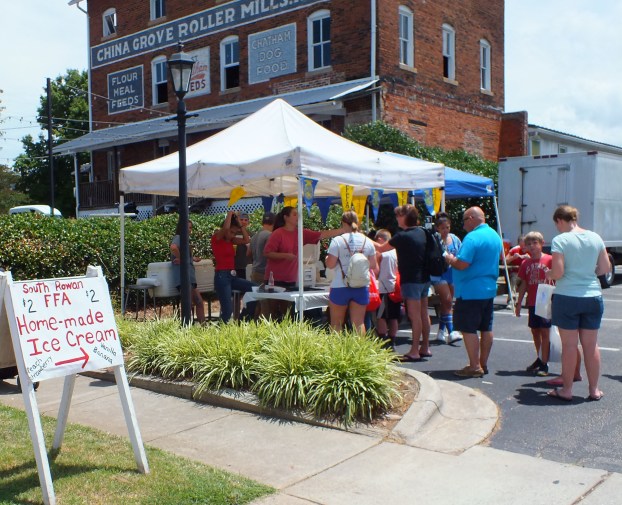 Eudy earned the team’s highest individual score. Other members that competed were Abbey Zentmeyer and Brianna Haynes, who were selected as state winners in the Agriscience Fair’s plant systems Division 6. They will travel to Indianapolis where they will compete at national convention.

Additionally, during the state convention, winners of FFA proficiency awards included Elizabeth Law, who was second in equine placement in the state, and Brianna Haynes, who placed first in the state in agriscience research in plant systems.

South Rowan’s FFA chapter received a 3-star gold National Chapter Award — one of only seven chapters in the state to earn the distinction. The school’s FFA Alumni were also selected as the state Outstanding Alumni Chapter.

On July 21, South Rowan FFA members participated in the Farmers Day in downtown China Grove. Throughout the day, upcoming freshman and other members from South Rowan helped working a shift at a booth near the Roller Mill to sell ice cream for the FFA. Homemade ice-cream flavors included peach, strawberry, banana and vanilla ice cream.

Throughout the summer, students helped to harvest produce and collect eggs which were donated to Main Street Mission and Unity Mobile Meals. This project is supported by the National FFA through a Living to Serve Grant that sponsors chapters to identify and address needs of the community. In addition to assisting those in need, our members learn the value of service, a trait we hope will follow them through life. The South Rowan FFA chapter was able to donate more than 4,100 pounds of produce and 435 dozen eggs.

South Rowan FFA President Abbey Zentmeyer also attended the Washington Leadership Conference where she was able to gain leadership skills to bring back to the South Rowan FFA chapter. The overall objective for the conference is for students to become an engaged citizen who can make a measurable positive difference in their communities.

During her trip in Washington she had the chance to meet with elected members of congress — including Senator Tom Tillis — tour the national monuments and created a “Living to Serve” plan for South Rowan’s community.

South Rowan High School’s FFA closed out the summer with the chapter officer retreat on Aug. 8 and 9.   Members participated in the East Peak Challenge ropes course to build teamwork and control their fears.

Salisbury Sumphony SALISBURY — Continuing an annual tradition of service to the community, the Salisbury Symphony has scheduled a series... read more