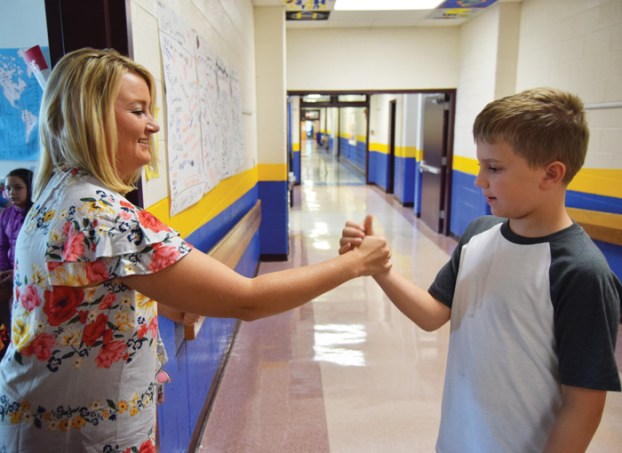 Spencer Ann Bowden, a fourth-grade teacher at Hurley Elementary School, gives a special handshake with student Cameron Dean Young. Bowden has a unique handshake with every student in her class — an idea she got from a viral video. Rebecca Rider/Salisbury Post

Shake on it: Teacher goes extra mile for students

SALISBURY — Spencer Ann Bowden was still a new educator when she saw a viral video of a teacher going the extra mile. The short clip showed a teacher offering a unique handshake to each student entering his class. Bowden said she knew immediately it was something she wanted to do in her own class — she just needed the opportunity.

That opportunity came this year when Bowden, previously a third-grade teacher at Hurley Elementary school, was moved to fourth grade. It was a change that meant she’d be teaching many students for a second year in a row.

“I’m trying to build really strong relationships,” she said. “But I’d already built relationships with them — so I knew I wanted to strengthen those even more.”

So Bowden pulled out the handshake plan. Instead of the usual first-week of school activities, she spent time each day meeting with students individually and in small groups, developing and practicing handshakes.

“I think at first they were shocked that I was going to learn a handshake for every one of them,” she said with a laugh.

But she was determined, and her students were excited.

Bowden now greets each student with a special handshake when he or she comes into her classroom. The moves range from simple clapping games to complicated sequences of hand motions to a short jitterbug.

“It’s more fun than just the same, ‘Good morning’ I give to everyone,” she said.

Bowden admits her memory for the handshakes isn’t perfect yet. But with buy-in from her students, she knows she won’t get away with mistakes.

“They remember, and if I don’t get it right, they make sure to let me know,” she said.

In the few weeks since school started, Bowden said she’s noticed a difference in her students.

“They’re happy to be here,” she said.

The handshakes bring a level of care and individual attention that some children may not receive at home.

“I think it means a lot to them to have that individual attention,” she said.

However, the handshakes aren’t the only way Bowden is letting her students know they’re one of a kind. Before the year started, Bowden assigned each student a number and then took to Facebook.

Interested friends, family members and co-workers picked a number and are in charge of writing notes, sending gifts and praying for that student. Students remain anonymous to the volunteer assigned to them.

At the beginning of the year, Bowden asked her volunteers to purchase a book for their child and to write a personal message inside the cover.

For her students, it’s a priceless gift.

“There are kids that really need that love from somebody,” she said.

The handshakes and sponsors are things that have changed her classroom for the better, and Bowden said she would recommend the practices to any educator.