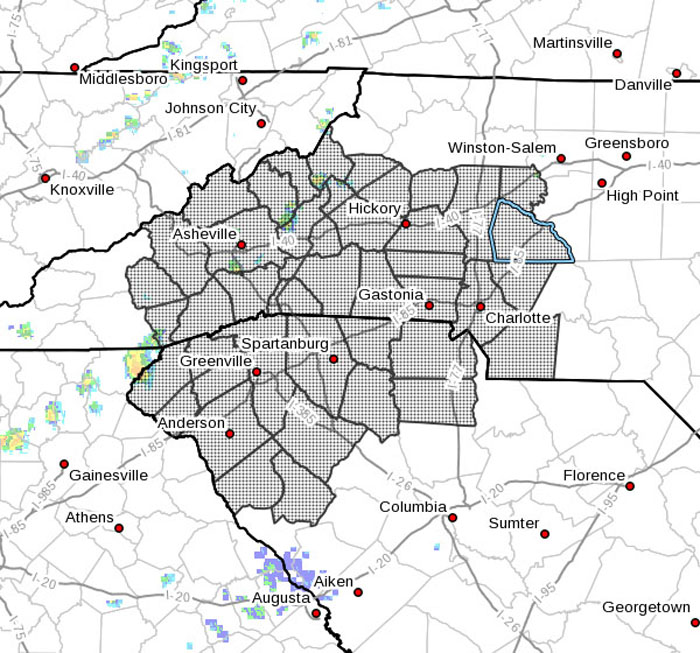 Hurricane Florence will move inland Friday, slowly progressing westward across the Carolinas through early next week. The storm will gradually weaken over the region, though heavy rain will continue even after winds taper off.

Soils will become saturated and flash flooding is likely to develop. Heavy rain from Hurricane Florence and its later remnants will lead to flash flooding across much of the area. 6 to 10 inches of rain generally are expected, with isolated amounts up to 15 inches, particularly along the east and south sides of mountain
ridges, including the Blue Ridge Escarpment.

Life-threatening flash flooding may develop as heavy rain bands occur this weekend into early next week, especially where the rain falls on soils left saturated by earlier rainfall. A few landslides can be expected in the mountains and foothills.
Streams and creeks may rise quickly during heavy rain and flood nearby low-lying areas. Larger rivers eventually may rise to flood stage as well.

Today will be mostly cloudy and windy, with no chance of rain. We’ll have a high of 83, with north northeast wind at 7-15 mph and gusts up to 23 mph.

If Hurricane Florence continues on its current path, we’ll begin to feel her effects Friday. It will be mostly cloudy and 81, with a 40 percent chance of showers after 8 a.m. North northeast wind will be sustained at 18-22 mph, with gusts up to 34 mph. A tenth to quarter inch of rain is expected.

Friday night will also have a 40 percent chance of showers. It will be mostly cloudy and 70, with north northeast wind around 21 mph, gusting to 31 mph. Another tenth to quarter inch of rain is expected.

The chance of rain Saturday night will be 70 percent, with thunderstorms in the early hours of Sunday. It will be cloudy and 69 and windy.

Wednesday will be mostly sunny and 84, with a 30 percent chance of showers.